Difference Between Hadith and Quran

Quran is the holy book of the Muslims that is considered to be the word of God. The religion or faith called Islam is totally based upon this holy book. Many people remain confused between the Quran and Hadith, the sayings and rituals that have clouded the understanding of the text contained in Quran. Hadith are mainly the sayings and teachings of the prophet Muhammad that are very similar to what is contained in Quran. This article attempts to clear the confusion by highlighting the differences between Quran and Hadith.

The sacred writings of the faith of Islam revealed by Allah to Prophet Muhammad are contained in a book called Quran or Koran. The word Quran literally means recitation, and the book is a compilation of what the almighty revealed to Muhammad. Quran is the leading light of the Muslims around the world and it has been there for more than a thousand years helping adherents of Islam to lead a good and chaste life that is according to the commandments of the almighty. Obedience to these commandments in one’s life leads to salvation. Following the principles of Quran ensures a rich and rewarding life on this planet.

Hadith is a collection of sayings and teachings of the prophet Muhammad. It is the most important source of religious laws of Islam. Hadith are written by scholars who were born later than the Prophet, and there are differences in their memories, intellects and their interpretations of what the prophet said or gave approval. Hadith are ascribed to Muhammad Saheb and play an important role in the interpretation of Islamic laws. Hadith were compiled in 8th and 9th centuries, but the two main sects of Islam, the Shia and the Sunni, have different interpretations of the same Hadith. Hadith describe the actions, habits, statements and tacit approval of the prophet to the actions or behaviors of others in front of him.

What is the difference between Hadith and Quran?

• Quran and Hadith can be compared with the Bible and the Gospels to make it easier for the westerners to understand the two concepts.

• While the Quran is the edifice of the religion or the faith called Islam, Hadith are the books containing the life, actions, and sayings of the prophet Muhammad.

• Hadith are written later than Quran by different scholars having different abilities and memories.

• Quran is considered to be the word of God and is actual recitation of God where he revealed the text to the prophet for a long time period of 22 years (612-632 AD).

• Hadith hold importance for interpretation of Islamic jurisprudence whereas Quran remains the leading light for all Muslims to lead a rich and rewarding life and also to attain salvation and entry into the Kingdom of Heaven. 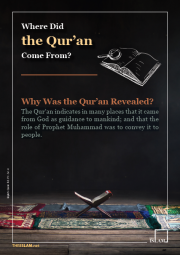 Where Did the Qur’an Come From?

How Did The Quran Reach Us?

The Quran: God Speaks to The People of the World