Muhammad Prophet Sent by God As A Mercy to the World

‘....I became more than ever convinced that it was not the sword that won a place for Islam in those days in the scheme of life. It was the rigid simplicity, the utter self-effacement of the prophet, the scrupulous regard for his pledges, his intense devotion to his friends and followers, his intrepidity, his fearlessness, his absolute trust in God and in his own mission. These, and not the sword, carried everything before them and surmounted every trouble.’Gandhi in Young India (periodical), 1928, Volume X.

‘He was of a certainty a most unique and special man who demonstrated within his own life the virtues of humility, compassion, obedience, and a thirst for justice, and a call for all men to worship the one and only God of all creation…The message of Muhammad was, and remains to this day, a message of peace, mercy, and compassion.’William W.  Baker, former college Professor of Ancient History and Biblical Studies, member of Near East Institute of Archaeology and the Oxford Philosophical Society in More in Common Thank You Think, 1988 Defenders Publications. p. 6-7.

610 C.E. He  receives the first revelation of the Quran.

615 C.E. The Muslim community is persecuted by the rich and powerful in Mecca.

624 C.E. The Battle of Badr – Muslims win a dramatic victory over Meccan forces.

625 C.E. The Battle of Uhud – Muslim forces suffer losses after an initial victory.

627 C.E. The Battle of the Trench – Muslims hold off and defeat a besieging Meccan army.

628 C.E. A peace treaty is signed between Mecca and Medina.

Biographical Facts About Him

Muhammad , whose name in Arabic means ‘the praised one,’ was born in the town of Mecca which is situated in Saudi Arabia today. He was the son of a young couple from the tribe of Quraish. His father, Abdullah, died two months before his birth, and his mother, Aamina, died when he was six years old. Both his parents came from a humble, but eminent, background.

His grandfather, Abdul-Muttalib, was the virtual head of the Meccan commonwealth and custodian of the Ka’ba, the cube-shaped building in Mecca built by the Prophet Abraham for the worship of God.

Upon the death of his grandfather, Muhammad went to live with his uncle, Abu Talib, who was a generous gentle man, but was not rich.

The young Muhammad  had to earn his own livelihood. He first served as a shepherd, then as an assistant to his uncle’s trading caravans, travelling to northern Arabia and Syria. It was on these ‘business trips’ that he learned trading skills. These skills were later noticed by Khajida, a wealthy widow businesswoman. She hired Muhammad  to run her commercial enterprise.

They got married when she was forty and Muhammad  was twenty-five. The marriage produced six children, two boys who died as infants and four girls. He remained married to his wife for a period of twenty-five years until her death, despite the fact that taking multiple wives was culturally accepted.

For several years he practiced meditation and contemplation at a cave called Hira on Mt. Nur, on the outskirts of Mecca. It was here, at the age of forty, where he received the first revelation:

‘Proclaim in the Name of your Lord and Sustainer

Who has created –Created humanity out of a mere clot. Proclaim – for your Lord Is the Most Gracious One Who has taught (the use of) the Pen,Taught humanity what they did not know!

The leaders of Mecca were displeased with the new message which rejected their idol-worship and threatened their way of life. Most of the early believers were from the lowest economic class of society who were attracted to the message of equality and justice. The powerful Meccans tortured them. After years of abuse, the Prophet Muhammad  sent some Muslims to a just and fair Christian king in Africa.

The year 620 C.E., when he was fifty years old, was marked by sorrow and sadness as both his wife, Khadijah, and his uncle, Abu Talib, passed away in the same year. Without the protection of his uncle, the Prophet Muhammad turned to other cities for support and shelter. Finally, the people of Madina invited the Muslims to their city and treated them as family.

FACT: The coming of the Prophet Muhammad  was foretold in the Bible in numerous verses, for example:

“I (God) will raise them up a Prophet from among their brethren, like unto thee (Moses), and I will put my words in his mouth; and he shall speak unto them all that I shall command him.” (Deuteronomy 18:18)

“And I will pray the Father, and he shall give you another Comforter, that he may abide with you forever.” (John 14:16)

Miracles of The Prophet Muhammad

A number of miracles were performed by the Prophet Muhammad as proof that he was a true prophet of God.

The Quran was his greatest miracle:

The following are just a few miracles he performed based on eyewitness accounts that have reached us through a chain of unbroken authorities: 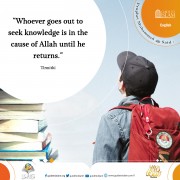 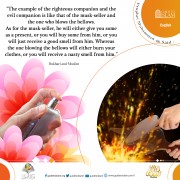