Congregational prayer: its importance and status Congregational prayer: its importance and status 1-Congregational prayer is a duty : For Muslim men,and this is clear in both in the Quran and the Sunnah, the prophet (pbuh) also said: whoever hears the call must respond ; his prayer (away from the mosque) is invalid unless he has a good reason. 2-The most difficult Prayers for Hypocrites: Reported by Abu Hurayrah:’Allah’s messenger said :”the prayers found too hard by the hypocrites are Isha’ and Fajr .Had they known how much godness they bring, they would have come eagerly to join them ,even though they would have to crawl Allah says: ‘Mankind! We’ve created you out of a male and a female ,and have made you nations and tribes ,so that you might come to know one another .Truly, the noblest of you in the sight of Allah is the one who is most genuinely Allah-fearing.Allah is all-knowing.all-aware’ (13:49). 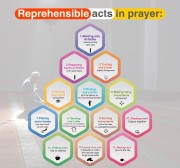