Duties in prayer 1-Saying Allahu Akbar in every moment 2-The imam leading the prayer and a person praying alone says : sami a Allahu liman hamidah (`may Allah answer the prayer of the one who praises Him`) When standing up after bowing 3-Then when he was in the upright position he said: Rabbana wa lak alhamd i.e “You’re our lord and our praise is due to You” 4-Every worshipper in the congregation says only Rabbana wa lak alhamd, while al imam says it immediately after sami Allah liman hamidah 5-Saying Subhana Rabbi al’Azeem when bowing which means :Limitless is Allah in His Glory 6-Saying subhana Rabbi al’Aala when prostrating, which means : Glorified be my Lord, the Most High 7-Saying; Rabbi-gh-firli while sitting between the two prostrations ,which means :forgive me , my Lord 8-The first tashahhud except for people in the congregation when the imam forgets this tashahhud and rises for the next rakah . Those in the congregation are exempt from it because because they have an overriding obligation to follow the imam

Conditions for Adhan and Iqamah

Never say that you are too busy for salah 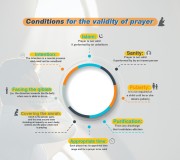 Conditions for the validity of prayer