· The Testimony of Faith.

· To learn about the ‘Five Pillars of Islam.’

· To understand the meaning of ‘Islam.’

· Hadith - (plural – ahadith) is a piece of information or a story. In Islam it is a narrative record of the sayings and actions of Prophet Muhammad and his companions.

· Kabah - The cube-shaped structure located in the city of Mecca.  It serves as a focal point towards which all Muslims face when praying.

· Ramadan - The ninth month of the Islamic lunar calendar.  It is the month in which the obligatory fasting has been prescribed.

· Hajj – A pilgrimage to Mecca where the pilgrim performs a set of rituals.  The Hajjis one of the five pillars of Islam, which every adult Muslim must undertake at least once in their life if they can afford it and are physically able.

The essential teachings of Islam are based on five principles, referred to as the ‘Five Pillars of Islam’, and six fundamental beliefs, known as the ‘Six Articles of Faith.’ This division is based on the following well known hadith of Prophet Muhammad, may the mercy and blessings of Allah be upon him. Umar, one of the closest of companions to the Prophet, related the following occurrence:

“Once, while we were sitting with the Prophet, a man appeared before us whose clothes were exceedingly white and hair exceedingly black.  No signs of traveling were seen on him and no one among us knew him.  He sat towards the Prophet, resting his knees against his knees and placing the palms of his hands on his thighs. He then said: ‘O Muhammad, tell me about Islam.’

The Messenger replied: ‘Islam is to testify that there is no god worthy of worship except Allah and Muhammad is the Messenger of Allah, to perform the prayers, to pay the compulsory charity (zakah), to fast in Ramadan, and to make the pilgrimage to the House if you are able to do so.’

He said: ‘You have spoken the truth.’

We were amazed at him asking questions and then saying he had spoken the truth!

He then inquired: ‘Tell me about faith (Imaan)?’

The Prophet replied: ‘It is to believe in Allah, His angels, His scriptures, His messengers, and the Last Day, and to believe in divine decree, both its sweetness and its bitterness.’

He said: ‘You have spoken the truth.’

Umar then related some more questions he asked and the answers given by the Prophet.  Finally, when the man left, the Prophet asked:

‘O ‘Umar, do you know who was the questioner?’

I said: ‘Allah and His Messenger know best.’

The Prophet said: ‘It was Gabriel who came to you to teach you your religion.’

The Meaning of ‘Islam’

The Arabic word ‘Islam’ means to submit, a total surrender, a total resignation to God.  Therefore, a ‘Muslim’ is ‘one who submits to God.’ Islam means to submit to Allah alone, to worship and serve Allah alone, and to believe and follow the prophet sent to them.  To many non-Muslims, ‘Islam’ is a religion that began in the seventh century in the Middle East, but to Muslims, Islam has always been the only religion of Allah since the time of Adam, the first man.  Thus, Islam was the religion of all prophets who came after him.  In the time of Moses, Islam was to worship Allah alone and believe and follow the teachings Moses had brought, and Islam in the time of Jesus was to worship Allah alone and believe and follow the teachings Jesus had brought, as they were both prophets sent by God to teach his religion.  After the coming of Prophet Muhammad, Islam is to worship Allah alone and believe and follow the teachings of Prophet Muhammad. Although the teachings of all the prophets about God, the Afterlife, and all other realities of belief were the same, there were slight differences in the methods of practice, worship and service, for each prophet was sent to a specific nation and specific period of time. Even though previous religions come under the general heading of Islam, the religion of Muhammad has specifically been given the name ‘Islam’ by God, as it is the final religion prescribed for humanity until the Day of Judgment.

The Five Pillars of Islam

Allah has mandated five acts upon which the whole religion of Islam is built. Due to their importance, the Prophet stated in another hadith:

“Islam has been built upon five…”

…and then proceeded to mention the same acts of worship described in the hadith of Gabriel above.

These acts of worship are called the Pillars of Islam, and they are as follows:

One must profess this testimony of faith, summarized in the two testimonies:

(a) There is no deity rightfully worshipped but Allah

(b) Muhammad is His Messenger.

Through the belief and attestation of the Testimony of Faith (Shahadah) one enters the fold of Islam. It is the central belief that a believer maintains throughout his life, and is the basis for all his beliefs and worship.

One must offer the five daily prayers at their specific times. Through the prayer, a Muslim maintains his relationship with Allah, comes to remember Him often, and avoids falling into sin.

Those who have stored a certain amount of wealth must allot a specific portion of it annually to designated deserving recipients.

Muslims must fast for a period of one lunar month, which is the month of Ramadan, by refraining from food, drink and sexual intercourse from dawn to dusk. The goal of fasting, as mentioned in the Quran, is to increase one’s piety and God-consciousness.

Pilgrimage to the House of God, the Kabah, in Mecca is obligatory for every able Muslim once in a lifetime. The Hajj is a physical and visual proof of the brotherhood of humanity, and their equality in servitude in front of Allah.

Points on the Five Pillars 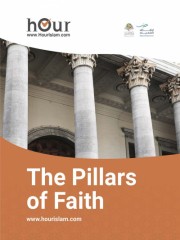 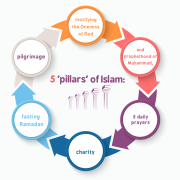