‘I wish Westerners who misunderstand Muslims could have seen Syed Abbas in action that day. They would see that most people who practice the true teachings of Islam…believe in peace and justice, not in terror… the Koran instructs all Muslims to make caring for widows, orphans, and refugees a priority.Greg Mortenson, Three Cups of Tea: One Man's Mission to Promote Peace ... One School at a Time, Chapter 17, pg. 219

Islam is a complete way of life, a religion that provides clear guidance to its followers on how to conduct themselves in their daily lives. Islam attaches so much importance to the love of God and love of man that it has laid down some universal fundamental rights for humanity.

Islam provides the standard by which a particular mode of conduct is judged and classified as good or bad. Before laying down any moral injunctions, Islam seeks to firmly implant in man’s heart the conviction that his dealings are with God, who sees him at all times and in all places. By setting God’s pleasure as the objective of man’s life, Islam has furnished the highest possible standard of morality.

● The Prophet Muhammad commanded his followers to treat everyone with kindness, especially parents and women.

● The kindness of a Muslim for the poor shows through zakah (required charity and an essential practice of Islam) and voluntary charity.

And We enjoined man (to show kindness) to his parents, For with much pain his mother bears him

To live with wives in kindness

And speak kindly to people

Repel evil with what is better

The Prophet of Mercy  put it beautifully

● Islam regards all people, regardless of their race, ethnicity, or language as equal.

● Diversity is a beautiful sign of God’s creation as

And among His signs is the creation of the heavens and the earth, and the variations in your languages and your colors. Indeed, in that are signs for those who know

● Equality is realized in daily worship where Muslims from different backgrounds stand next to each other in prayer.

● Equality is also seen in Hajj, the annual pilgrimage to Mecca in which all Muslim men dress in simple white clothes. All their worldly differences are eliminated in the eyes of God.

FACT: The Hajj radically transformed the life and perceptions of the famous African American leader, Malcolm X, in 1964 in racially segregated America. He wrote in his autobiography, a book that has influenced and touched the lives of many:

"There were tens of thousands of pilgrims, from all over the world. They were of all colors, from blue-eyed blondes to black-skinned Africans. But we were all participating in the same ritual, displaying a spirit of unity and brotherhood that my experiences in America had led me to believe never could exist between the white and the non-white…During the past eleven days here in the Muslim world, I have eaten from the same plate, drunk from the same glass and slept in the same bed (or on the same rug) - while praying to the same God with fellow Muslims, whose eyes were the bluest of the blue, whose hair was the blondest of blond, and whose skin was the whitest of white. And in the words and in the actions and in the deeds of the ‘white' Muslims, I felt the same sincerity that I felt among the black African Muslims of Nigeria, Sudan and Ghana.” (Autobiography of Malcolm X)

● Islam instructs Muslims to seek justice and encourages forgiveness as the high road.

O you who believe! Stand out firmly for justice, as witnesses to Allah, as against yourselves, or your parents, or your kin; and whether it be against rich or poor. For Allah can best protect both. Follow not the desires of your own hearts, lest you swerve, and if you distort justice or decline to do justice, indeed God is well acquainted with all that you do

● Even with the rules of justice, the Quran reminds Muslims of the value of forgiveness. For example:

Let them forgive and overlook. Do you not wish that God should forgive you? For God is Oft-Forgiving, Most Merciful

Show forgiveness, Speak for justice And avoid the ignorant

● God commands Muslims to be with those who are truthful, “

O you who believe! Be mindful of God and be with those who are truthful

● Giving false testimony is counted as a serious sin.

● Muslims are advised to

practice what they preach

● One should not advise people to do things that they themselves would not do. It is a sign of hypocrisy: “

O you who believe! Why do you say that which you do not do? Grievously hateful is it in the sight of Allah that you say what you do not do

● Rejecters of faith are described as liars and hypocrites, and Muslims are warned not to be like them.

● Muslims strive toward humility in their worship of God and in their conduct with others on earth.

● In prayer, Muslims humbly prostrate to the ground, in recognition that without God's constant guidance, people would be lost.

Call on your Lord with humility and in private, for Allah loves not those who transgress beyond bounds

● Both men and women should be modest in clothing and behavior. Foul language, backbiting, and gossip are forbidden.

Fact: A Muslim woman covers herself in hijab as an act of obedience to God, modesty, decency, and respect. It has nothing to do with male domination or oppression.

● Visiting the sick is from the clearest signs of mutual love, mercy, and empathy.

● The great reward awaiting those who visit the sick was mentioned by the Prophet Muhammad :

A visitor walking to visit a sick person will be wading in the mercy of God. When the visitor sits with the sick one, they will be immersed in mercy until they get up

● As with every other virtuous deed and moral action, the Prophet Muhammad  led by example. He would personally visit the sick and enquire about them through others

● The visitor must show compassion by choosing appropriate words, conduct, and making his stay brief.

● God is Generous (one of His names in Arabic is al-Kareem, “The Most Generous”). The Prophet Muhammad  was extremely generous, and Muslims are taught to be generous.

● The Prophet was said to be the most generous in the fasting month of Ramadan.

● One time the Prophet  of Islam prayed in the mosque, hurried to his house, and returned quickly. When asked why he left so suddenly,

I left a piece of gold at home which was given for charity and I did not like to leave it in my house for a night, so I brought it to the mosque to distribute

● Muslims are encouraged to be generous with their time, talent, and money as God says in the Quran that He will repay the generosity of a believer,

And whatever you spend in good, it will be repaid to you in full, and you shall not be wronged

And what will explain to you what the steep path is? It is the freeing of a slave from bondage; Or the feeding, in a day of famine, of an orphan relative, or a needy one in distress. Then will he be of those who believe, enjoin fortitude and encourage kindness and compassion 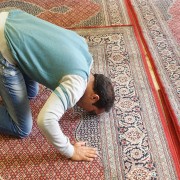 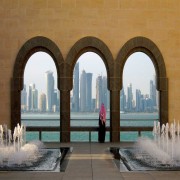