Becoming a Muslim and your own salvation

God Almighty has emphasized that every human being carries with him, his or her own salvation. An individual is alone held responsible for his sins. God, the Just and Magnificent, does not put responsibility on a child or an infant or a mad man. He places responsibility on an individual who is mentally capable and has reached a rightful age of maturity. We can see in reality how humans use this law in common day practice such as with a person's eligibility for driver's license, a work permit, graduation and finally independence from his or her parents.

As a person attains the age of responsibility, they leave their parents and begin their life as a mature individual. Alongside the freedom that is given comes a big sense of overwhelming responsibility. And, unlike childhood, when you make a mistake there is none other to blame except yourself.

What is important to understand from the above is that we are all responsible for our own actions and it is a priority for everyone to find his or her individual salvation before worrying about those around you.

Would you save a person from drowning if you did not know how to swim? Of course you will try without jumping in because what good would it be if you were both drowning? One must seek the truth always and once it has entered your heart and soul only then can you move on and help those around you. And if others do not accept the truth after that, then have no regret for you have done all you can do and the rest is in God's hands. Just as I am writing this book for the sake of helping someone find the truth, I can only present the facts, the rest is up to the reader to decide.

O you who have believed, upon you is (responsibility for) yourselves. Those who have gone astray will not harm you when you have been guided. To Allah is your return all together; then He will inform you of what you used to do.

God guides those He wills and loves, and those that are guided by Him are given a true blessing indeed. If you seek the truth with an open heart, God Willing, you will find it with ease.

help others to follow your guided path for as long as you can. For sure you cannot change their hearts, only God can do that, but you can try guiding them. We are not better than the prophets that were chosen and loved by God and who were not able to change the hearts of some of their loved ones. For example:

And it was revealed to Noah: None of your people will believe except those who have believed already. So be not sad because of what they used to do. And construct the ship under Our Eyes and with Our Revelation, and call not upon Me on behalf of those who did wrong; they are surely, to be drowned. And as he was constructing the ship, whenever the chiefs of his people passed by him, they mocked at him. He said: "If you mock us, so do we mock at you likewise for your mocking. And you will know who it is on whom will come a torment that will cover him with disgrace and on whom will fall a lasting torment." So it was till when Our Command came and the oven gushed forth (water like fountains from the earth). We said: "Embark therein, of each kind two (male and female), and your family- except him against whom the Word has already gone forth- and those who believe." And none believed with him, except a few. And he (Noah) said: "Embark therein: in the Name of Allah will be its moving course and its resting anchorage. Surely, my Lord is Oft-forgiving, Most Merciful." So the ship sailed with them amidst waves like mountains, and Noah called out to his son, who had separated himself. "O my son! Embark with us and be not with the disbelievers." The son replied: "I will betake myself to some mountain, it will save me from the water." Noah said: "This day there is no savior from the Decree of Allah except him on whom He has mercy." And waves came in between them, so he (the son) was among the drowned. And it was said: "O earth! Swallow up your water, and O Sky! Withhold (your rain)." And the water was made to subside and the Decree of Allah was fulfilled (the destruction of the people of Noah). And (the ship) rested on (Mount) Judi, and it was said: "Away with the people who are oppressors." And Noah called upon his Lord and said: "O my Lord! Verily, my son is of my family! And certainly, Your Promise is true, and You are the Most Just of the judges." He (Allah) said: "O Noah! Surely, he is not of your family; verily, his work is unrighteous, so ask not of Me that of which you have no knowledge I admonish you, lest you should be one of the ignorant." Noah said: "O my Lord! I seek refuge with You from asking you that of which I have no knowledge. And unless You forgive me and have mercy on me, I would indeed be one of the losers." It was said: "O Noah! Come down (from the ship) with peace from Us and blessings on you and on the people who are with you (and on some of their offspring), but there will be other people to whom We shall grant their pleasure (for a time), but in the end a painful torment will reach them from Us."

2) Abraham was not able to save his father.

And mention in the Book (the Qur'an) Abraham. Verily, he was a man of truth, a Prophet. When he said to his father: "O my father! Why do you worship that which hears not, sees not and cannot avail you in anything? O my father! Verily, there has come to me of the knowledge that which came not unto you. So follow me, I will guide you to the Straight Path. O my father! Worship not Satan. Verily, Satan has been a rebel against the Most Gracious (Allah). O my father! Verily, I fear lest a torment from the Most Gracious (Allah) should overtake you, so that you become a companion of Satan (in the Hell-fire)." He (the father) said: "Do you reject my gods, O Abraham? If you stop not this I will indeed stone you. So get away from me safely (before I punish you)." Abraham said: "Peace be on you! I will ask forgiveness of my Lord for you. Verily, He is unto me Ever Most Gracious."

The people of Lot (who dwelt in the towns of Sodom in Palestine) belied the Messengers. When their brother Lot said to them: "Will you not fear Allah and obey Him? Verily, I am a trustworthy Messenger to you. So fear Allah, keep your duty to Him and obey me. No reward do I ask of you for it (my message), my reward is only from the Lord of the worlds (of mankind and Jinn). You go unto the males of mankind and leave those whom Allah has created for you to be your wives? Nay, you are trespassing people! They said: "If you cease not. O lot! Verily you will be one of those who are driven out!" He said: "I am indeed, of those who disapprove with severe anger and fury over your (evil) action (of sodomy). My Lord! Save me and my family from what they do." So We saved him and his family, all except an old woman (his wife) among those who remained behind. Then afterward We destroyed the others. And We rained on them a rain (of torment). And how evil was the rain of those who had been warned! Verily, in this is indeed a sign, yet most of them are not believers. And verily, your Lord, He is indeed the All-Mighty, the Most Merciful.

4) While Muhammad was unable to save his uncle who had raised him since the death of his parents.

Verily, you O Muhammad guide not whom you like, but Allah guides whom He wills. And He knows best those who are the guided 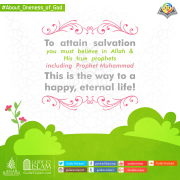 To attain salvation you must believe in Allah & His true prophets