Belief in Allah (part 1 of 2): The Categories of Tawheed

·An Introduction to Pillars of Islam and Articles of Faith (2 parts).

·To understand the categories of Tawheed.

·Tawheed – The Oneness and Uniqueness of Allah with respect to His Lordship, His Names and Attributes and in His right to be worshipped.

·Sunnah - The word Sunnah has several meanings depending on the area of study however the meaning is generally accepted to be, whatever was reported that the Prophet said, did, or approved.

·Shirk – a word that implies ascribing partners to Allah, or ascribing divine attributes to other than Allah, or believing that the source of power, harm and blessings comes from another besides Allah.

Belief in Allah, the proper name in Arabic of the one and only God, consists of four matters:

(a)  Belief in Allah’s existence.

(c)  Allah is entitled to worship.

(d)  Allah is known by His Most Beautiful Names and Attributes.

(a) Belief in Allah’s Existence

It is not required that Allah’s existence be proven by scientific, mathematical, or philosophical arguments.  His existence is not a ‘discovery’ to be made by the scientific method or a mathematical theorem to be proven.  Every human being has an innate belief in a Creator.  This belief is not a result of learning or personal deductive thinking.  It is outside influences that effect this innate belief and confuse a person as

There is no child who is not born with a natural belief in Allah, but his parents make him a Jew, a Christian or a Magian

(b) Allah is the Lord

(i) Allah is the sole Lord and Ruler of the physical world.  The term ‘Lord’ here specifically means that He is the Creator, Controller; the Kingdom of the heaven and the earth belongs exclusively to Him, and He owns them.  He alone brought existence out of non-existence and all depend on Him for their conservation and continuance.  He did not create the universe and leave it to pursue its own course according to fixed laws and cease to take any further interest in it.  His power is required at every moment to sustain all creatures.  Creation has no Lord besides Him.

“Say (O Muhammad): ‘Who provides for you from the sky and the earth?  Or who owns hearing and sight?  And who brings out the living from the dead and brings out the dead from the living?  And who disposes the affairs?’  They will say: ‘Allah.’ Say: ‘Will you not then be afraid of Allah’s punishment (for setting up rivals with Allah)

He is the ever-ruling King and the Savior, the Living God, full of wisdom.  No one can change His decisions.  Angels, prophets, human beings, and the animal and plant kingdoms are under His control.  Historically, few people have denied the existence of the Lord; throughout ages people for most part have believed in One God, a Supreme Being, a supernatural Creator.

(ii) Allah is the only Ruler of the affairs of men.  Allah is the supreme Lawgiver[1], the Absolute Judge, the Legislator, He distinguishes right from wrong.  Just like the physical world submits to its Lord, human beings must submit to the moral and religious teaching of their Lord, the Lord who sets apart right from wrong for them.  In other words, Allah alone has the authority to make laws, determine acts of worship, decide morals, and set standards of human interaction and behavior.  His is the command:

His is the Creation and Command

(c) Allah is Entitled to Worship

Allah has the exclusive right to be worshipped inwardly and outwardly, by one’s actions and by one’s heart.  Not only can no one be worshipped apart from Him, absolutely no one else can be worshipped along with Him.  He has no partners or associates in worship.  Worship, in its comprehensive sense and in all its aspects, is for Him alone.

There is no true god worthy of worship but He, the Most Merciful, the Most Compassionate

Worship Allah!  You have no other god but Him

It was the central message of Abraham, Isaac, Ishmael, Moses, the Hebrew prophets, Jesus, and Muhammad, peace be upon them all.  If Allah alone creates, gives life and death, provides food and security, gives hearing and sight, then He alone must be worshipped.

Worship in Islam consists of every act, belief, statement, or sentiment of the heart Allah approves and loves, everything that brings a person closer to His Creator.  It includes everything Allah has legislated in the Quran or through His Prophet’s Sunnah.  It includes ‘external’ worship like the daily ritual prayers, fasting, charity, and pilgrimage as well as ‘internal’ worship such as faith in the six articles of faith, reverence, adoration, love, gratitude, and reliance.  An act of worship is not accepted unless it conforms to the following:

(i) It is done exclusively for Allah and none should have any share in it, including one’s own self. Worship is not to be done even to satisfy the soul’s base desires, such as receiving praise or showing-off.  This is the meaning of Laa ilaaha ill-Allaah.

(ii)It must conform with the teachings of Prophet Muhammad. It must be performed in the exact manner performed by him, without any addition or omission.  This is the implication of Muhammad Rasool-Allaah.

Allah is entitled to all types of worship, the worship of the body, soul, and heart. It remains incomplete unless it is done out of reverence and fear of Allah, divine love and adoration, hope in divine reward, and extreme humility.  Giving anyone else - prophets, angels, Jesus, Mary, idols, or nature - a portion of worship due to Allah is called Shirk and is the most enormous sin in Islam.

(d) Allah is Known by His Most Beautiful Names and Attributes

Allah is known by His Most Beautiful Names and Attributes as they appear in the Quran and Sunnah, without corrupting or denying the obvious meaning, imagining their “how,” or thinking of them in human terms.

And the Most Beautiful Names belong to Allah, so call on Him by them

Therefore, it is inappropriate to use First Cause, Author, Substance, Pure Ego, Absolute, Pure Idea, Logical Concept, Unknown, Unconscious, Ego, Idea, or Big Guy as divine names.  Any name which one seeks to affirm for Allah must have been revealed in the Quran or Sunnah.

The Names of Allah indicate His perfection and freedom from deficiencies.  Allah does not forget, sleep or get tired.  His seeing, like all other attributes, is not like human sight.  He is not unjust, and has no son, mother, father, brother, associate, or helper.  He was not begotten and He begets none.  He stands in need of none as He is perfect.  He does not become or resemble humans and has no need to do so to “understand” human suffering.  Allah is the Almighty (al-Qawee), the One Incomparable (al-’Ahad), the Acceptor of Repentance (al-Tawwab), the Most Compassionate (al-Raheem), Ever-Living (al-Hayy), All-Sustaining (al-Qayyoom), all-Knowing (al-’Aleem), All-Hearing (al-Samee’), All-Seeing (al-Baseer), the Pardoner (al-’Afuww), the Helper (al-Naseer), and the Healer of the Sick (al-Shaafi’). There are many other names mentioned in the Quran and Sunnah.

All praise and glory is due to Him for His absolute perfection and majesty. 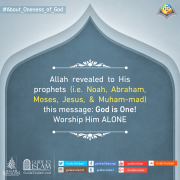 God is One! Worship Him Alone 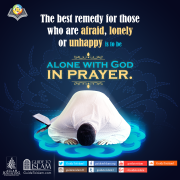 The best remedy for those who are afraid is to be alone with God in prayer . 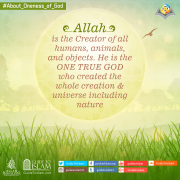 Allah is the ONE TRUE GOD