Belief in Allah (part 2 of 2): Shirk, the Opposite of Tawheed

·  An Introduction to Pillars of Islam and Articles of Faith (2 parts).

· To learn the precise meaning of the word ‘shirk’ and understand its severity.

· To know what are the greater and lesser forms of ‘shirk’.

· To be aware of the some of the forms of ‘shirk’ prevalent in our societies.

· Tawheed – The Oneness and Uniqueness of Allah with respect to His Lordship, His Names and Attributes and in His right to be worshipped.

· Shirk – a word that implies ascribing partners to Allah, or ascribing divine attributes to other than Allah, or believing that the source of power, harm and blessings comes from another besides Allah.

· Riyaa – It comes from the word ra’aa meaning to see, to behold, to view. Thus the word riyaa means showing off, hypocrisy, and dissimulation.  Islamically riyaa means to perform acts which are pleasing to Allah with the intention of pleasing other than Allah.

The Arabic word shirk is the opposite of tawheed, Allah’s oneness, and is more inclusive than polytheism and idolatry.  It means associating Allah with other deities.  Shirk is to associate others with Allah in certain aspects designated as unique to Him and exclusively His in the Quran and Sunnah.

There is no issue upon which Islam is so strict as the one of monotheism (tawheed). Associating partners with God (shirk) is the deadliest sin, the greatest violation with which the Lord of the heavens and the earth may be defied.  Death in the state of shirk permanently severs a person from divine grace:

Surely Allah forgives not that a partner be set with Him (i.e.  the sin of shirk), and forgives all besides that to whom he pleases

Shirk has many forms, some of which will be discussed below.

Acts which fall under this category of shirk are regarded as unforgivable. Allah will not forgive them unless one repents.

Verily, Allah does not forgive shirk, but He forgives other than that to whom He pleases

This category contradicts the very purpose of creation,

as expressed in Allah’s statement

In this category of shirk, acts of worship are directed to beings other than Allah or alongside Him, as is their rewards.

Allah gives an example of this type in the Quran, in His saying

So when they ride in the ships, they call upon Allah, being sincerely obedient to Him, but when he brings them safe to the land, lo, they commit shirk with Him

The Quran stresses in many verses that Allah does not share His powers with any partner.  It warns those who believe their idols will intercede for them that they, together with the idols, will become fuel for Hellfire on the Day of Judgment.

The greater shirk includes invoking or supplicating to a false deity, prophet, angel, saint, idol, or anything besides Allah.  Christians pray to a man who they believe to share divinity with Allah, the Prophet of Allah Jesus, peace be upon him.  Catholics direct certain types of worship to saints, angels, and Mary, which they regard as “veneration”. All these things are regarded as shirk.

It is also considered shirk to pray to Prophet Muhammad, may the mercy and blessings of Allah be upon him, or to graves of holy men.

Believing in the legislation of others, whether governments or religious leaders in opposition to the clear teachings of Islam is also a major form of shirk,

They took them as lords besides Allah not by directly praying to them, but by willfully accepting their changing the lawful into prohibited and the forbidden into lawful in Allah’s religion.  They gave them the authority that only Allah has - to legislate in divine law.

Another form of major shirk is giving any creation a portion of divine love reserved for Allah.

And of mankind are some who take (for worship) others besides Allah as rivals (to Allah).  They love them as they love Allah.  But those who believe love Allah (more than anything else)...

Swearing by other than Allah and carrying out religious acts for worldly gain, like showing off or to win favors are two of the lesser forms of shirk.

“The thing I fear for you the most is ‘lesser shirk.’ The companions asked ‘Oh!  Messenger of Allah, what is “lesser shirk?”  He replied showing off, for surely Allah will say on the Day of Resurrection when people are receiving their rewards, ‘Go to those for whom you were showing off in the material world and see if you can find any reward from them.’”

Once, the Prophet announced:

Showing off (riyaa in Arabic) is the practice of performing any of the various forms of worship in order to be seen and praised by people.  Doing religious acts to impress people destroys the spiritual benefits of righteous deeds and incurs sin on the person.  Sometimes, even the most pious are not spared of it because it is so hidden and the motivating force behind it is so ingrained.  Getting rid of it involves that one concentrate upon the fact that they are performing the worship for Allah’s pleasure alone, and not the pleasure of people.

A Muslim must take great care to ensure intentions begin pure and remain pure whenever righteous deeds are being done.  In order to ensure this, the saying of Allah’s name is enjoined in Islam before all acts of importance.  A series of informal prayers (du’as) have also been prescribed by the Prophet before and after all natural habits to turn them into acts of worship and develop awareness of Allah.

Predicting the future by means of comparing the positions of stars and constellations, in conjunction with the time of year that a person was born is a type of shirk.  Only Allah knows the future, so it is impossible to predict future events by studying the stars.  This is a form of shirk because belief in astrology credits astrologers with knowledge of the future, as well as the fact that they ascribe certain powers to  created objects – stars  – that neither Allah nor science has assigned.

Reading palms, looking into a crystal ball, and other forms used to foretell the future are forms of shirk for the same reasons given above.

A common example of shirk is belief that the number thirteen is an unlucky number, especially in the West, where it is not uncommon for tall buildings not to have a thirteenth floor.  It is shirk because it assigns the ability to bring bad fortune to a mere number!

It has been a common custom for certain animals or objects to be associated with good or bad luck for many centuries in many parts of the world.  For example, black cats, magpies, rabbits' feet, and horseshoes are thought to bring good luck.  All of these examples are shirk because the ability to bring good or bad luck is assigned to Allah’s creation.

All Muslims should avoid all forms of shirk, and the only way one can be sure to do so is if they study its different forms and understand well the concept of tawheed. Shirk is the gravest of sins in Islam, more severe than other grave sins such as murder and adultery, for it vies with the sole right of Allah to worship. Thus, it is worthy that Muslims do their best to avoid shirk and become eligible to enter the Gardens of Paradise. 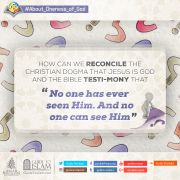 How can we reconcile the CHRISTIAN DOGMA

Allah is free of all wants, while we are the ones who are needy 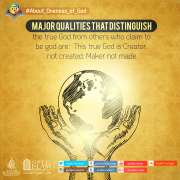 This true God is Creator,Maker not made