· To learn what the Islamic belief in angels entails.

· To familiarize oneself with the true reality of angels as described in Islam.

· To learn about the number, names, abilities and tasks of angels.

· To appreciate that belief in the angels does not mean that Allah is in need of His creation.

·  Kabah - The cube-shaped structure located in the city of Mecca.  It serves as a focal point towards which all Muslims face when praying.

Belief in angels is one of the six pillars of belief or Imaan in Islam.  It means to:

(i)   believe in the reality of angels

(ii)  the names assigned to the angels

(iii) the tasks and abilities of angels in heavens and earth.

Angels are not ‘good forces of nature’, hologram images, or illusions.  Neither are angels like a fat cherubic baby with a halo on its head as often depicted in Christian illustrations.  They are real, created but are generally hidden from our senses.  They have no divine qualities and are not God’s associates running different districts of the universe.  Also, they are not objects to be worshipped or prayed to as they do not intercede for us at our request, nor do they deliver our prayers to God.  They all submit to God and carry out His commands.  There are no fallen angels; they are not divided into ‘good’ and ‘evil’ angels.  Human beings do not become angels after death.

Angels were created from light before human beings.  The angels are beautiful beings with wings as described in the Quran.

Angels form different hierarchies and orders in the sense they are of different size, status, and merit.  The best were those present at the battle of Badr who fought between the Prophet and the Meccan pagans.

They are of great size.  The greatest of them is Gabriel.  Our Prophet actually saw him in his original form.  He had six hundred wings and blocked the horizon.  Jewels, pearls, and rubies fell from his wings, in a form only Allah knows about .  Also, the attendants of God’s Throne are among the greatest angels.  They love the believers and beseech Allah to forgive them their sins.  They carry the Throne of Allah, about whom

I have been given permission to speak about one of the angels of Allah that carry the Throne.  The distance between his ear-lobes and his shoulders is equivalent to a seven-hundred-year journey

They do not eat or drink.  When Abraham placed a calf in front of the visiting angels who brought him the good news of a son, they refused to eat:

He said, ‘Will you not eat?’  (When they did not eat), he conceived a fear of them.  They said: ‘Fear not,’ and they gave him glad tidings of a son endowed with knowledge

They exalt [Him] night and day [and] do not slacken

The Number of Angels

How many angels there are?  Only Allah knows.  Al-Bayt al-Ma’moor  is a sacred house in the heavens above the Kabah, the black cubical sacred house in Mecca.  Every day seventy thousand angels visit it and leave, never returning to it again, another group coming after them.[1]

The Names of Angels

We are required to believe in the names of the angels that have been mentioned in the Quran and Sunnah.  They include:

The names Raphael and Azra’eel are not furnished in Islamic texts.  Of the above, only Gabriel and Michael are mentioned in the Bible.

The angels have great powers given to them by Allah.

They have the ability to take on different forms other than their own.  At the moment of Jesus’ conception, Allah sent Gabriel to Mary in the form of a man,

as Allah says in the Quran

Then We sent to her Our angel, and he appeared before her as a man in all respects

Angels also came to Abraham in human form, and he did not know that they were angels until they told him so.  Similarly, angels came to Lot to deliver him from danger in the form of young men with beautiful faces.  Gabriel used to come to Prophet Muhammad, may the mercy and blessings of Allah be upon him, in different forms.  Sometimes he would appear in the form of one of his handsome disciples, and sometimes in the form of a Bedouin.

Angels have the ability to take human forms in some circumstances involving common people, such as the ones who came to the man who killed a hundred people and those who came to the blind, the bald and the leper.

The greatest speed known to man today is the speed of light; the angels are able to travel much faster than this.  Hardly had an enquirer completed putting a question to the Prophet, but Gabriel would bring the answer from Allah.

Gabriel is God’s messenger to mankind.  He would convey the revelation from Allah to His Messengers.

Say, ‘Whoever is an enemy to Gabriel – it is [none but] he who has brought the Qur’an down upon your heart, [O Muhammad], by permission of Allah, confirming that which was before it and as guidance and good tidings for the believers

Tasks of the Angels

Some angels are put in charge of executing God’s law in the physical world.  Michael is responsible for rain, directing it wherever Allah wishes.  He has helpers, who do what he tells them, by the command of his Lord; they direct the winds and clouds, as Allah wills.  Another is responsible for blowing the Trumpet, which will be blown by Israafeel at the onset of the Day of Judgment.  Others are responsible for taking souls out of the bodies at the time of death: these are the Angel of Death and his helpers.

Say: ‘the Angel of Death put in charge of you, will (duly) take your souls, then shall you be brought back to your Lord

Then there are personal guardian angels, responsible for protecting the believer throughout his life, when he stays home or travels, when he is asleep or awake.  These are the “angels in succession” concerning whom

For each (person), there are angels in succession, before and behind him.  They guard him by the Command of Allah

Others are responsible for recording the deeds of man, good and bad.  These are the “honorable scribes” (kiraaman kaatibeen).

Munkar and Nakeer are responsible for testing people in the grave.

Among them are keepers of Paradise and the nineteen ‘guards’ of Hell whose leader is ‘Malik.’

There are also angels responsible for breathing the soul into the fetus and writing down its provisions, life-span, actions, and whether it will be wretched or happy.

Some angels are roamers, traveling around the world in search of gatherings where God is remembered.  There are also angels constituting God’s heavenly army, standing in rows, who never get tired or sit down, and others who bow or prostrate, and never raise their heads, always worshipping Allah.

As we learn from above, the angels are a grandiose creation of God, varying in numbers, roles, and abilities. God is in no need of these creatures, but having knowledge and belief in them adds to the awe that one feels towards God, in that He is able to create as He wishes, for indeed the magnificence of His creation is a proof of the magnificence of the Creator. 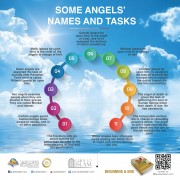 Some Angles' Names and tasks 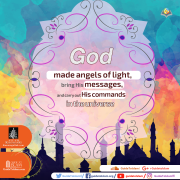 The second Article of Faith: Belief in Angels