·An Introduction to Pillars of Islam and Articles of Faith (2 parts).

·To understand the purpose of reveling of scriptures.

·To learn what the ‘Belief in Scriptures’ entails.

·To distinguish between two matters: the original Torah, Gospel, and Pslams and the present day Bible.

·To appreciate that the Quran is indeed different from other scriptures in many respects.

Belief in Scriptures is the third article of Islamic faith.

First, let us look at why they were revealed.

(1)The scripture revealed to a prophet is a point of reference to learn the religion and obligations towards Allah and fellow human beings.  Allah guides human beings by revealing Divine Scriptures through which they realize the purpose of their creation.

(2)By referring to it religious disputes and differences between its followers could be settled.

Indeed, it is We who sent down the message and indeed, We will be its guardian

(4)In order that Allah’s conclusive argument brought by the messengers against human beings remains after their death.

Messengers as bearers of good news as well as of warning in order that humankind should have no plea against Allah after the messengers. And Allah is Ever All Powerful, All Wise

No one can plea that the prophets and their messages are no longer in existence as long as the scriptures are present.

(i) Allah truly revealed them.

(ii) Belief in the names of certain scriptures.

(iii)Belief that they contain the truth. As for the scriptures prior to the Quran, since they have been changed, we believe in the original scriptures that were revealed to the prophets.

(iv) Belief that the Quran is a witness over them and confirms them. The truth remains one and the same, and thus the Quran confirms the truth which was in them. As for the laws, the Quran has abrogated the previous scriptures.

First,a Muslim firmly believes that Divine Scriptures were revealed by Allah to His messengers to guide mankind.  Muslims believe the Quran is not the only spoken Word of Allah, but that Allah also spoke to prophets before Prophet Muhammad, may the mercy and blessings of Allah be upon him.

and to Moses Allah spoke directly

Allah describes true believers are those who:

The most important and central message of all scriptures was to worship Allah alone.

And we sent never a messenger before you except that we revealed to him, saying, ‘there is no God but I so worship Me

Second, we believe in the scriptures mentioned in the Quran:

(i) the Quran itself, revealed to Prophet Muhammad.

(iii) the Gospel (Injeel in Arabic) revealed to Prophet Jesus (different from the New Testament read in churches today).

(iv) the Psalms (Zabur in Arabic) of David.

(v)The scriptures (Suhuf in Arabic) of Moses and Abraham.

We have a general belief that there were other scriptures revealed by Allah whose names and specifics are not known to us. Thus we cannot definitely affirm that scriptures of other religions prior to Muhammad other than those mentioned were revealed from Allah.

Third, Muslims believe whatever is true in them and has not been altered or corrupted in the previous scriptures.  This point will be elaborated below so it becomes clear and no confusion remains.

Fourth, belief that Allah revealed the Quran as a witness over the previous scriptures and to confirm them,

And We have sent down to you (O Muhammad) the Book (this Quran) in truth, confirming the Scripture that came before it and trustworthy in highness and a witness over it (old Scriptures)

No scripture exists today in the original language it was revealed in, except the Quran.  The Bible was not revealed in English.  Different books of today’s Bible are translations of translations and different versions exist.  These multiple translations were done by people whose knowledge or honesty is not known.  As a result, some Bibles are bigger than others and have contradictions and internal inconsistencies!  No originals exist.  The Quran, on the other hand, is the only scripture in existence today in its original language and is internally consistent with no contradictions.  It is today as it was revealed 1400 years ago, transmitted by a rock-solid tradition of memorization and writing.  Few human being has ever memorized the whole Bible, not even any pope, whereas, the entire Quran is memorized by almost every Islamic scholar and hundreds of thousands of ordinary Muslims, generation after generation.  Now, that is preservation!

The previous scriptures essentially consist of:

(i) stories of man’s creation and earlier nations, prophesies of what was to come like signs before the Judgment Day and new prophets, and other news.

The stories, prophecies, and news in the Bible read in churches and synagogues today are partly true and partly false.  These books consist of some translated fragments of the original scripture revealed by Allah, words of some prophets, mixed with explanations of scholars, errors of scribes, and outright malicious insertions and deletions.  The Quran, the final and trustworthy scripture, helps us sort out fact from fiction.  It is the criterion to judge the truth from the falsehood in them.  For example, the Bible still contains some clear passages pointing to Allah’s oneness.[1] Also, some prophecies regarding Prophet Muhammad are found in the Bible as well.[2]  Yet, there are passages, even whole books almost entirely recognized to be forgeries and handiwork of men.[3]

(ii)  Law and rulings, the allowed and prohibited, like the Law of Moses.

If we were to assume the law, that is 'the lawful and the prohibited' contained in the previous books did not suffer corruption, the Quran still abrogates those rulings, it cancels the old law which was suitable for its time and is no longer applicable today.  For example, many old laws pertaining to diet, ritual prayer, fasting, inheritance, marriage and divorce have been abrogated by the Islamic Law, while others have remained the same.

The Quran is different from other scriptures in the following respects:

(1) The Quran is miraculous and inimitable.  Nothing similar to it can be produced by human beings.

(2)After the Quran, no more scriptures will be revealed by Allah.  Just as Prophet Muhammad is the Last Prophet, the Quran is the Last Scripture.

(3)Allah has taken it upon Himself to protect the Quran from alteration, to safeguard it from corruption, and to preserve it from distortion.  On the other hand, previous scriptures suffered alteration and distortion and do not remain in their originally revealed form.

(4)The Quran, for one, confirms early scriptures and, for another, is a trustworthy witness over them.

(5)  The Quran abrogates them, meaning it cancels many rulings of the previous scriptures and renders them inapplicable.  Thus the sum of Laws of the old scriptures is no longer applicable, the previous rulings having been abrogated or confirmed with what the Quran has brought.

Belief in the Books 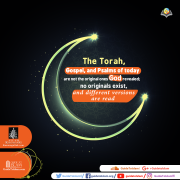 The Torah, Gospel, and Psalms of today are not the original ones God revealed 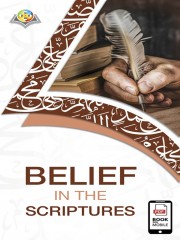 Belief in The Scriptures