Beliefs of Jews & Christians about the Last Day

Jews and Christians have variant beliefs about life after death. The concept of Hell is essentially absent from the Old Testament, which has little to say about the afterlife at all. Few verses (like Daniel 12:2, Isaiah 66:24, Ecclesiastes 9:10) seem to refer of an after-life. Generally, modern Judaism is not much concerned with questions of afterlife and Jewish beliefs in resurrection and afterlife vary widely. Consequently, the concept of hell was never extensively developed in Judaism and many modern Jews do not believe in Hell or an afterlife.

Nevertheless, Rabbinic Judaism does subscribe to a notion of life after death and resurrection and belief in resurrection of the dead is one of Rambam's 13 Principles of Faith.[1] Briefly, the Jewish concept of hell is "Gehinnom." One may go there after death, but for a maximum of a year.[2] It is for purification, not for everlasting torture.

Throughout his preaching, Jesus presented forth two final possibilities for human existence: the one being everlasting happiness, the other everlasting torment. He describes the fate of the damned as everlasting fire, outer darkness, tormenting thirst, a gnawing worm, and weeping and gnashing of teeth. In the parable of the sheep and the goats, Jesus indicates that some will be condemned. He says to the goats:

"Depart from me, you cursed, into the eternal fire prepared for the devil and his angels" (Matthew 25:41)

In the Gospel of John, Jesus is quoted as saying, "

[1] The closest that anyone has ever come to creating a widely-accepted list, also considered by some to be the minimum requirements of Jewish belief, is called Maimonides’s 13 principles of faith.

[2] The period of time in Hell does not exceed 12 months. Only the utterly wicked souls are punished for the entire 12 months. Sources differ on what happens at the end of those 12 months: some say that the wicked soul is utterly destroyed and ceases to exist while others say that the soul continues to exist in a state of consciousness of remorse. This 12-month limit is repeated in many places in the Talmud, and it is recited in the Jewish mourner’s prayer known as Kaddish. For example, the Talmud states, “Wrongdoers of Israel who sin with their body, and wrongdoers of the gentiles who sin with their body, go to Gehinnom and are punished there for 12 months. After 12 months, their body is consumed and their soul is burned and the wind scatters them under the soles of the feet of the righteous.” [Rosh Hashanah 17a]

The teaching of the Catholic Church supports the idea that there are two classes: the saved and the damned. Three general councils of the Church (Lyons I, 1245; Lyons II, 1274; and Florence, 1439) and Pope Benedict XII's bull Benedictus Deus (1336) have taught that everyone who dies in a state of mortal sin goes immediately to suffer the eternal punishments of Hell. This belief has persisted without question in the Catholic Church to this day, and is repeated almost verbatim in the Catechism of the Catholic Church (CCC [section] 1022, 1035). Several studies published by Catholics early in the twentieth century concluded that there was a virtual consensus among the Fathers of the Church and the Catholic theologians of later ages to the effect that the majority of humankind go to eternal punishment in Hell. The Catholic Church insists that explicit faith, reception of the sacraments, and obedience to the Church are the means to salvation.[1]

Following is a sampling of the positions of various Christian denominations on the issue of afterlife and salvation. It is impossible to describe the glory and splendor of heaven and the terror and torment of hell. Whether taken literally or figuratively, the meaning is the same: Hell is a place where one will experience total separation from God; heaven enjoys the total presence of God. Knowing that this is the horrible end awaiting the wicked, the Assemblies of God is strongly motivated to win the lost before it is too late. (Assemblies of God) To die in mortal sin without repenting and accepting God's merciful love means remaining separated from him for ever by our own free choice. This state of definitive self- exclusion from c

[1] Pius IX in the Syllabus of Errors (1864) condemned the proposition: "We should at least have good hopes for the eternal salvation of those who are in no way in the true Church of Christ." Pius XII taught that even those who are united to the Church by bonds of implicit desire--a state that can by no means be taken for granted--still lack many precious means that are available in the Church and therefore "cannot be sure of their salvation." (Mystici Corporis, 1943) Vatican II said that anyone who knows that the Catholic Church was made necessary by Christ and refuses to enter her cannot be saved

communion with God and the blessed is called "hell." (Catechism of the Catholic Church)

The statement of Christ in Matthew 25, and elsewhere, are taken at face value. It is believed that after death each man must come before God in judgment and that he will be judged according to the deeds done while he lived (Hebrews 9:27). After judgment is pronounced he will spend eternity either in heaven or hell. (Churches of Christ)

We believe that glorious and everlasting life is assured to all who savingly believe in, and obediently follow, Jesus Christ our Lord; and that the finally impenitent shall suffer eternally in hell. (Church of the Nazarene)

This hope for the final salvation of humanity and the eternal universal restitution of all things in heaven and on earth ... is drawn from the unlimited promise of the Gospel and the magnitude of God's grace made known to the world through Christ. (Evangelical Lutheran Church of America)

We believe in the bodily resurrection of the dead; of the believer to everlasting blessedness and joy with the Lord; of the unbeliever to judgment and everlasting conscious punishment. (Evangelical Free Church of America)

The moral progress of the soul, either for better or for worse, ends at the very moment of the separation of the body and soul; at that very moment the definite destiny of the soul in the everlasting life is decided. ... The Orthodox Church believes that at this moment the soul of the dead person begins to enjoy ... the life in Paradise or to undergo the life in Hell. There is no way of repentance, no way of escape, no reincarnation and no help from the outside world. (Greek Orthodox Archdiocese of America ) 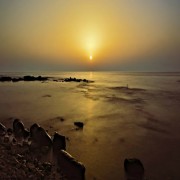 What Does it Take to be Happy? 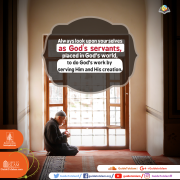 Always look upon yourselves as God's servants