Can God do something evil?

This, of course is a claim about God, and claims about God, like anything else, need to be proven. It’s also a statement that is fraught with problems. For example, one might ask “Can God stop existing?” or “Can God do something evil?”

There are two usual responses to such a question. Either: “No, He can’t”, which contradicts what the Christians previously said about God being able to do anything, or “Yes, He can if He wanted to but God never would do anything evil because the nature of God is good.”

Why then is this true of God’s goodness but not His other at­tributes? Exactly the same criterion applies to God being One, Eternal and Self-Sufficient. Just as it is not in the nature of the good God to do evil, also it is not in the nature of the Eternal, Sell Sufficient Creator to become a temporary and needy creation. So the claim that the Creator became creation and still remained the Creator is a claim that can never be proven, since it is by definition an impossibility, and this applies to any religion that makes such a claim about the Creator. This also dispenses with most of what Hindus and pagans believe since they make similar claims about the Creator being incarnated as some created being. 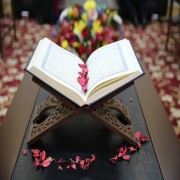