All praise is due to Allâh, Lord of all the worlds. Peace and blessings of Allâh be upon the Messenger, his household and companions.

Fellow Muslims! Fear Allâh as He should be feared. For it is by fearing Allâh that high degrees are attained and calamities are removed.

Dear Muslims! Know that the life of this world has foundations and concepts and noble meanings around which its benefits revolve. Among these noble meanings is compassion. An ability to show compassion is a great quality given only to those who are fortunate and denied to those who are unfortunate though it is rooted in the nature of all creatures. The Messenger of Allâh said,

 Indeed, Allâh created mercy in one hundred parts. And He sent only one part to the earth by which the creatures show compassion to one another. It is out of this one part that you see a horse or a she-camel raises her hoof off her young one lest she crushes it. Allâh withholds the remaining ninety nine parts in order to shower it on His slaves on the Day of Resurrection.

The Almighty Allâh possesses the quality of compassion in a way that befits to His Majesty. Compassion is a perfect quality in the creatures by which they deal with one another and by which the strong show mercy to the weak and benefit him and ward off things that can harm him. Compassion is in the nature which Allâh created but when that nature is erased with sins, the compassion turns to cruelty.

Though compassion is an upright nature upon which Allâh created His slaves, Islâm also affirmed it and commanded the Muslims to be compassionate. This is because; Islâm is a religion of mercy and its teachings aim at achieving blessings, justice, prosperity, truth, peace and servitude to Allâh alone. It also aims at uprooting falsehood and all kinds of evils. Allâh tells His Messenger,

And We have sent you (O Muhammad (peace be upon him)) not but as a mercy for the ‘Alamîn (mankind, jinn and all that exists).

In another hadîth, he said,

 The similitude of believers in regard to their mutual love, affection and fellow-feeling is that of one body; when any limb of it aches, the whole body shares in the sleeplessness and fever.

Islâm encourages showing mercy to the young, the old and the weak. The Prophet said,

 He who does not respect the old nor show compassion to the young nor enjoin virtuous deeds nor prohibit vices is not of us.

Aishah narrated that a Bedouin Arab came to Allâhs Messenger and said,

You kiss your children? But we dont kiss ours.
Upon that, Allâhs Messenger said,

 What can I do for you since Allâh has removed mercy from your heart?

 Mercy is not removed except from the heart of a miserable one.

The mercy of Islâm even encompasses animals and other creatures. This is because it is the religion of compassion, justice and peace, and it enjoins the Muslims to uphold the mercy in its most sublime meaning.

Abdullâh bin Jafar narrated that the Messenger of Allâh entered an orchard that belonged to a man among the Ansâr. While he was there, he saw a camel that groaned and wept when it saw him. The Messenger of Allâh approached it and wiped its ears and it became quiet. He then said,  Who is the owner of this camel?  A young man among the Ansâr came and said, It is for me O Messenger of Allâh!  Upon this the Prophet said,  Cant you fear Allâh regarding this animal with whose ownership Allâh endowed you? It has complained to me that you starve it and cause it hardship.

We were with the Messenger of Allâh during a journey. He went to ease himself. We saw a bird with her two young ones and we captured her young ones. The bird came and began to spread its wings. The Apostle of Allâh came and said:

Who grieved this for its young ones? Return its young ones to it. He also saw an ant village that we had burnt. He asked: Who has burnt this? We replied: We. He said: No one has the right to punish with fire except the Lord of fire.

Ibn Masûd narrated that Allâh’s Messenger (may peace be upon him) invoked curse upon one who made a live thing the target (of marksmanship). (Muslim)

 Whoever kills a bird for fun, the bird will cry to Allâh for help on the Day of Resurrection saying, O my Lord, so-and-so killed me for fun and not for any benefit.

Brethren in faith! It is a manifestation of Islâms compassion that it commands its adherents not to wrong non-Muslims. Hishâm bin Hakîm narrated that he passed by some people in Syria who had been detained for (not paying) the Jizyah.

I testify that I heard Allâhs Messenger say,Allâh would punish those who torment people in this world (without any genuine reason).He then entered upon the governor and narrated this hadîth to him and the governor commanded that these people be set free.

Fellow Muslims! How dire is the need of the mankind to this quality of Islâm! How dire is their need to have the quality of compassion that soothes the injuries of the distressed, enjoins good treatment of parents and relatives, consoles the oppressed and orphans, protects the rights of others and prevents violation of the life and properties of Muslims and non-Muslims alike. The compassion that Islâm teaches also encourages doing righteous deeds and abstaining from unlawful things. The mankind is in dire need of being compassionate especially in this age in which desires have prevailed and many people are no longer referring to the Book of Allâh and the Sunnah but depending on their own whims. Allâh says,

O you who believe! Keep your duty to Allâh and fear Him, and speak (always) the truth. He will direct you to do righteous good deeds and will forgive you your sins. And whosoever obeys Allâh and His Messenger (peace be upon him), he has indeed achieved a great achievement (i.e. he will be saved from the Hell-fire and will be admitted to Paradise).

Dear Muslims! Fear Allâh and be conscious of Him in all your deeds with a sure knowledge that He knows all that is hidden and all that is open.

And ordain for us good in this world, and in the Hereafter. Certainly we have turned unto You.” He said: (As to) My Punishment I afflict therewith whom I will and My Mercy embraces all things. That (Mercy) I shall ordain for those who are pious and give Zakât; and those who believe in Our Ayât (proofs, evidences, verses, lessons, signs and revelations, etc.); Those who follow the Messenger, the Prophet who can neither read nor write (i.e. Muhammad (peace be upon him)) whom they find written with them in the Taurât (Torah) and the Injîl (Gospel) – he commands them for Al-Ma’rûf (i.e. Islâmic Monotheism and all that Islâm has ordained); and forbids them from Al-Munkar (i.e. disbelief, polytheism of all kinds, and all that Islâm has forbidden); he allows them as lawful At-Taiyibât ((i.e. all good and lawful) as regards things, deeds, beliefs, persons, foods), and prohibits them as unlawful Al-Khabâ’ith (i.e. all evil and unlawful as regards things, deeds, beliefs, persons, foods), he releases them from their heavy burdens (of Allâh’s Covenant), and from the fetters (bindings) that were upon them. So those who believe in him (Muhammad (peace be upon him)) honour him, help him, and follow the light (the Qur’ân) which has been sent down with him, it is they who will be successful.

Dear Muslim brother! Let compassion be one of your characteristics, for life is not worth living without it and the first beneficial of this quality in this world and the Hereafter is the person himself. The Messenger of Allâh said,

 The inhabitants of Paradise are three: One who wields authority and is just and fair, and the person who is merciful and kind-hearted towards the poor and towards his relatives, and one who does not stretch his hand in spite of having a large family to support.

Dear brother! Learn the knowledge of your religion so that you can worship Allâh upon sure knowledge. Be compassionate with the creatures by doing good to them and refraining from harming them, for Allâh will ask you of His rights and the rights of His creatures on a day,

whereon neither wealth nor sons will avail, except him who brings to Allâh a clean heart. 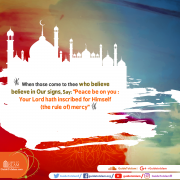 Allah has inscribed Mercy for himself 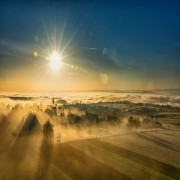