Does Islam Teach Hatred and Violence?

Violence has always been part of human history. There has never been a period of time when no acts of violence took place, be it individual scuffles or all out wars. As humans, violence is part of our existence and can sometimes be necessary and essential. For most, the term “violence” carries a negative connotation. However, there is legitimate and illegitimate violence. There is violence that we praise and congratulate and there is violence that we condemn and abhor. The former is necessary for our survival. For instance, we must resort to violence to subdue a robber or criminal. It is not reasonable that the response to an escaping kidnapper be anything other than pursuing them and rescuing the child. This will often require an act of legitimate violence. The kidnapper also uses violence, but the illegitimate type.

Islam is not a pacifist religion and allows legitimate violence in particular contexts. The Qurʾān and teachings of the Prophet, peace be upon him, provide guidelines and restrictions on the use of violence. These instructions are often cherry picked out of context to demonstrate Islam’s alleged violent nature against non-Muslims. However, even an honest cursory examination of the Qurʾān and the life of the Prophet Muhammad, peace be upon him, it will become evident that they do not teach to fight people simply based on their faith.

The Prophet, peace be upon him, had non-Muslim neighbors and family members who he loved, cared for, and had strong bonds and relationships with. If Islam taught Muslims to kill and hate all non-Muslims simply because of their faith then he should have been the first to do it. However, that was not the case. The Qurʾān clarifies the relationship between Muslims and non-Muslims as being one that is based on love and compassion. The Qurʾān states Allah does not forbid you to deal justly and kindly with those who fought not against you on account of religion and did not drive you out of your homes. Verily, Allah loves those who deal with equity. (Qurʾān 60: 8).

The Qurʾān highlights the special place of Christians and Jews by constantly referring to them as “people of the book.” There are many verses in the Qurʾān that highlight the close relationship between Muslims and non-Muslims. And you will certainly find those who say, ‘We are Christians,’ to be the nearest of them in love to the believers. That is because amongst them are savants and monks and because they are not arrogant(Qurʾān 5:83). Additionally, the Qurʾān even prohibits Muslims from insulting the god’s or idols that are worshipped by other religions, Although Muslims obviously disagree with non-Muslims who worship other than God, they are prohibited from insulting or speaking ill of other religious deities. And do not insult those whom they call upon besides Allah (Qurʾān 6:108).

Furthermore, the Qurʾān allows Muslims to eat the food of Jews and Christians and permits interreligious marriage. The Qurʾān states The food of those who have received the Scripture is lawful for you, and your food is lawful for them. And so are the virtuous women of the believers and the virtuous women of those who received the Scripture before you (Qurʾān 5:5). Contrary to the stereotype that Muslims must kill or hate non-Muslims, the Qurʾān notes that Muslims can break bread with people of other faiths. Eating “their” food and non-Muslims eating “your” food implies that there will be a sharing of dinners, occasions, and invitations. This necessitates a friendly and loving relationship.

The latter part of the verse is even more compelling, the Qurʾān notes that Muslims can marry women who are Jewish or Christian. Marriage involves love, not only toward the non-Muslim spouse, but to her family, parents, and siblings. It is illogical that the Qurʾān would call on Muslims to kill or hate all non-Muslims and simultaneously allow them to marry and share food with them. In other words, the Qurʾān’s instructions about love/hate and violence/peace between Muslims and non-Muslims is not based on the faith of the other person, but whether or not they violently attack Muslims or cause oppression.

This does not mean that the Qurʾān teaches pacifism because the Qurʾān there are cases where people will fight and expel Muslims from their home simply based on religion. The Qurʾān rejects this kind of intolerance and teaches Muslims to not give in and ally themselves with people who call for the expulsion of Muslims from their home countries simply based on their being Muslim. Allah only forbids you from those who fight you because of religion and expel you from your homes and aid in your expulsion – [He forbids] that you make allies of them. And whoever makes allies of them, then it is those who are the wrongdoers (Qurʾān 60: 9).

This verse is rejects that Muslims make allies with such individuals, but it does not encourage unrestricted hate and violence. The Qurʾān is a practical book which allows those who are oppressed to fight injustice, but it does not allow Muslims to respond to injustice with injustice. In other words, the Qurʾān demands that Muslims even be just with those who hate and fight them. O you who have believed, be persistently standing firm for Allah, witnesses in justice, and do not let the hatred of a people prevent you from being just. Be just; that is nearer to righteousness. And fear Allah; indeed, Allah is Acquainted with what you do (Qurʾān 5: 8).

There are certainly verses in the Qurʾān that permit violence, but they are often cherry picked without providing the above context. The logical conclusion one arrives at when reading these verses is that Islam teaches and encourages Muslims to love all people, including those of different faiths. However, it forbids Muslims from being “sell outs” by allying themselves with xenophobes who fight against Muslims and ban them from their homes simply based on their religion. In other words, the Qurʾān does not teach Muslims to fight non-Muslims, but to fight religious intolerance.

The Qurʾān notes that if people do not stand up to religious intolerance it will lead to the destruction of all places of worship. There are those who have been evicted from their homes without right, only because they say, “Our Lord is Allah .” And were it not that Allah driven back people, some by means of others, there would have been demolished monasteries, churches, synagogues, and mosques in which the name of God is much mentioned. And God will surely support those who support Him. Indeed, Allah is Powerful and Exalted in Might (Qurʾān 22:40).

The above verse makes it clear that the Qurʾān’s permitting of violence is not against people of different faiths, but for the protection of religious freedom for all faiths. If that right of religious freedom is not protected for one religion, then it will lead to the persecution of other religious minorities. 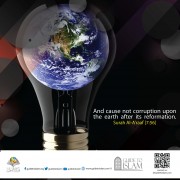 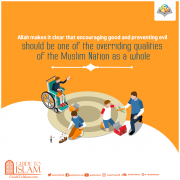 Ponder Over the Universe Around You