Du'a and its Relationship with Destiny

The topic of du'a and its relationship with destiny (qadr) is a very important one, and one around which much confusion exists.

Many people ask: "If everything has already been destined to occur, then of what use is du'a, as, if Allah has written what I want, I will get it without making du'a, and if it is not written for me, then I will never get it no matter how much du'a I make?"

The response to this question lies in understanding the outcome of anything is dependant on the performance of the efforts that are necessary to procure it. In other words, it has already been decreed, for example, that a seed will give fruit if planted, but this will not occur unless the farmer takes the appropriate efforts in irrigating the crop, maintaining it, protecting the seedling as it grows, and ensuring as much as he can that the factors are amenable for the plant to give fruit.

So even though a person believes in the Divine Decree, he must at the same time strive all he can to ensure that the desired goal occurs. So du'ais the means that one uses to achieve the desired goal that one has, and this means in no way contradicts the destiny that has been written for that person.

This stance is clarified by the Prophet's hadith reported by Thawban, that he said:

"Nothing increases one's life-span except good deeds, and nothing repels Divine Decree except du'a. And very, a person may be deprived for sustenance due to a sin that he does!"

In other words, the performance of good deeds is a cause of increasing one's life span, so if a person puts in the necessary effort, the results will be achieved, and this is also destined. So both the means to achieve a goal, and the fulfilment of the goal itself, are already decreed.

If someone were to ask: "How can du'a repel Divine Decree?" we would respond, "The fact that you may be ill has already been decreed by Allah for you, as has the fact that you will ask Allah to cure you of this illness (i.e. both the illness and your asking to cure the illness has been decreed). In a similar manner, a person may be deprived of his sustenance that was decreed for him since Allah's eternal knowledge encompassed the fact that this person would perform a sinful deed that would cause deprivation of his sustenance. All of this, then, is from the decree of Allah, all Glory and Praise be to Him."

There are a number of ahadith that clarify this point. For example, Mu'adh ibn Jabal reported that the Prophet, peace be upon him, said:

"Caution will be of no benefit against Divine Decree, but du'a benefits all things, whether they come down or not. I therefore advise you to make du'a, O servants of Allah!"

[This hadith is weak. It was narrated by Ahmad, Abu Ya'la and at-Tabarani in al-Kabir, as has been mentioned in Da'if al-Jami' #4785]

So no matter how cautious a person is, he cannot escape what is written for him, simply because Allah controls everything, and nothing escapes His Knowledge or Power. However, by turning to Allah through du'a, it is possible to avert something that might have been decreed. Salman al-Farsi narrated that the Prophet, peace be upon him, said:

"Nothing repels Divine Decree except du'a, and nothing increases one's life-span except good deeds."

[Authentic, reported by at-Tirmidhi and al-Hakim from Salman, and is in Sahih al-Jami' #7687]

This hadith informs us in no uncertain terms that the only way that we can repel some Divine Decree is through the means of du'a. So it is possible that some unpleasant matter has been preordained for us, but only if we do not make du'a to avert it from us. So if a du'a is made, then this matter will not occur or be fulfilled, whereas if du'a is left, the misfortune will occur.

Another narration by at-Tirmidhi also supports this. The Prophet, upon whom be peace, said:

"There is no Muslim on the face of the earth that asks Allah for anything except that Allah gives it to him, or averts from him a similar evil, as long as he does not ask for something evil or for breaking the ties of kinship."

[Authentic, narrated by at-Tirmidhi from 'Ubadah ibn Samit, as is mentioned in Sahih al-Jami' #5637]

From this narration, the benefits of du'a are made clear, and its value is understood. For not only is a person rewarded for a making a du'a, but it is also a cause of repelling an evil that was destined for him, and in obtaining the good that he was expecting.

Ibn Hajr, commenting on the benefits of du'a, said:

du'a is the attainment of reward by obeying the command (of Allah to make du'a), and also by the attainment of what is asked for, for there is a possibility that the request is dependant on the du'a, since Allah is the Creator of both the effort and result of the effort!"

Therefore, the proper response to the question posed at the beginning of the chapter is, in the words of Ibn al-Qayyim, as follows:

To summarise, then, Divine Decree (qadr) cannot be used as an excuse not to make du'a. For, just as one strives to ensure that one attains worldly needs, of food, drink and family, so too must one strive in one's religious deeds to attain the desired goal. Du'a is intrinsically related to qadr; in fact, it is part of one's qadr. Allah has already decreed that a certain matter will be granted to a servant, or an evil averted from him, if he make du'a, so if he were to leave du'a, then the desired goal would not be reached.

Hence why it was the sunnah of the Prophet, upon whom be peace, to make the following du'a during the witr prayer:

" ... Bless me in what You have given me. And avert and turn away from me the evil that has been decreed for me, for verily You Decree (all things), and none can decree against You ... "

So the Muslim turns to Allah and prays to Him so that any and all evil can be averted from him.

Additionally, it should be remembered that the concept of Divine Decree is one that a human can never fully understand, due to his limited intellect and finite capabilities. The true Muslim does not delve too deeply into the philosophical ramifications of Divine Decree. Rather, he accepts all that has occurred to him in the past as having been destined for him, and he strives to obtain what he desires in the future (as long as it is permissible for him). Since he does not know what has been written for him in the future, he expects the best from Allah, and does everything in his power to ensure that what he wants is granted to him. Just like going to work everyday will ensure, if Allah wills, that he gets his pay-cheque at the end of the month, so too does making du'a ensure, if Allah wills, that he achieves his desired goal. 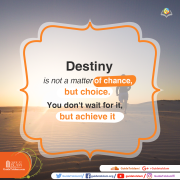 Destiny is a matter of a choice

God knows how to shift things around