Business dealings in Islam are not simply a matter of getting ahead in this world. They are not cutthroat competition or taking advantage of others. Instead, they are based on a very strong ethical basis. A Muslim realizes that every business transaction is a question of morals and ethics.

Business transactions are an essential aspect of any developed society. The Prophet (peace be upon him) gave a great deal of guidance concerning business transactions. Muslims must heed this guidance. This guidance will, Allah willing, go a great way in removing many problems and feelings of hatred that are the result of unjust or improper business practices. Furthermore, the feeling of brotherhood¾ loving for one’s brother what one loves for oneself¾ should permeate all business transactions. How can brothers be considered true brothers to one another when they are willing to cheat each other or lie to each other simply for the sake of the dollar?

Thus, the Prophet (peace and blessings of Allah be upon him) stated in a hadith that stresses both brotherhood and fair business practices: “Do not be envious of one another; do not artificially raise prices against one another; do not hate one another; do not turn one’s back on each other; and do not undercut one another in business transactions. And be, [O] servants of Allah, brethren. A Muslim is the brother of a Muslim. He does not wrong him. He does not fail him [when he needs him]. He does not lie to him. And he does not show contempt for him. Piety is here”¾ and he pointed to his chest three times. “It is enough of evil for a person to hold his brother Muslim in contempt. All of a Muslim is inviolable to another Muslim: his blood, his wealth and his honor.”[1]

The Prophet (peace be upon him) also said, “May Allah have mercy on the one who is easy-going and generous while buying, while selling and when demanding his rights.”[2]

In fact, the key to blessed business transactions, in which both parties please Allah and receive blessings, is honesty and straightforwardness. The Prophet (peace be upon him) said, “The buyer and seller have the right of option as long as they do not part from one another. If they were honest and clear, they would be blessed in their transaction. If they concealed facts and lied, the blessings of their transaction would be destroyed.”[3]

If a person is ethical and morally conscious in his business dealings, this is a good sign that he is preferring the Hereafter to this world. He is not willing to risk Allah’s punishment and anger for a measly gain. He is also strengthening the trust among the Muslim brethren. Allah willing, his reward with Allah will be great.

A general principle with respect to business transactions is that they must be the result of the mutual consent or approval of the contracting parties:

“O you who believe! Eat not up your property among yourselves unjustly except it be a trade amongst you, by mutual consent”

During the Farewell Pilgrimage, the Prophet (peace and blessings of Allah be upon him) also announced, “The wealth of a person is not permissible except through willing consent.”[4] In other words, no one can be coerced into giving up part of his wealth or entering into a business dealing. Such coercion is illegal and would void the contract. At the same time, the Muslim is free to enter into any business transaction that does not violate Islamic law. In general, he is a “free actor,” neither compelled by the state nor any other force. In this sense, the Islamic economic system has some characteristics in common with free market capitalism.

Another general principle with respect to business transactions is that they are permissible unless there is evidence to demonstrate that they are forbidden; only if it is found that it contains some forbidden aspect will it be deemed forbidden. Thus, Islamic Law has laid down some principle guidelines while delineating particular forbidden aspects that must be avoided. The matters that should be avoided include unstated or undetermined terms, speculative or overly risky conditions, interest, gambling and fraud or deception. If any one of these factors is found in a contract, the contract, depending on the extent to which they are present, may be rendered null, void and impermissible. It is essential that Muslims be aware of these forbidden characteristics so that they may live off of pure and permissible sources. Thus, some of them are discussed in some detail below.

The Aspect of Gharar

From these hadith and others, there is a consensus among jurists that an overwhelming presence of undue risk or uncertainty renders a business contract null and void. Such transactions are ones in which the probability of one or both of the parties being wronged is great. Concerning the meaning of this concept of gharar, Rayner states,

The Sharee’ah determined that in the interests of fair, ethical dealing in commutative contracts, unjustified enrichment should be prohibited. This policy precludes any element of uncertainty or risk (Gharar).[6] In a general context, the unanimous proposition of the jurists held that in any transaction, by failing or neglecting to define any of the essential pillars of contract relating to the consideration or the object, the parties undertake a risk which is not indispensable for them. This kind of risk was deemed unacceptable and tantamount to speculation due to its inherent uncertainty. Speculative transactions with these characteristics are therefore prohibited…[7]

According to ibn Juzay, examples of gharar transactions include:

(1) “Ignorance of the price and uncertainty about the existence of the object.”[10]

(2) “Uncertainty about the price of the object and about its characteristics, as in the example of the sale of cloth in a shop without any specification about its quality or price.”[11]

(3) “Uncertainty related to difficulties of delivery.”[12]

(4) “Uncertainty about the existence of the object, as in the case of a sickly animal.”[13]

The Aspect of Riba (Interest)

One of the well-known great sins is the taking or paying of riba (interest).[14] Indeed, any Muslim familiar with the numerous texts censuring riba would undoubtedly do his best to avoid any trace of riba. For example,

Allah has said in the Quran,

“Those who devour interest will not stand [on the Day of Judgment] save as he arises whom the devil has deranged by (his) touch. That is because they say, ‘Trade is just like interest,’ whereas Allah has permitted trading and has forbidden interest. He unto whom an admonition from his Lord comes, and (he) refrains (in obedience thereto), shall keep [the money of] that which is past, and his affair (henceforth) is with Allah. As for him who returns (to interest), such are rightful owners of the Fire. They will abide therein forever. Allah destroys interest and gives an increase for charity. Allah loves not every disbelieving, sinner. Truly, [as for] those who believe, perform righteous deeds, establish the prayer and pay the Zakat, their reward is with their Lord. No fear shall come upon them neither shall they grieve. O you who believe! Observe your duty to Allah, and give up what remains (due to you) in interest, if you are (in truth) believers. And if you do not, then be informed of a war from Allah and His messenger. But if you repent, then you have your principal [without interest]. Do not wrong [others] and you shall not be wronged”

Thus, it is forbidden to pay interest or to receive interest, and this includes the interest that one earns on one's checking or savings account. In general, if an individual wishes to loan money to another individual who is in need, this act should be a brotherly and charitable act and there should be no thought of reaping monetary benefits in such a case. If someone wishes to make a “business loan,” hoping to reap profits, then he should be willing to put his risk and not demand a guaranteed return for his money. It is not fair that the borrower is at risk in his business venture while the lender faces no risk at all.

At the same time, Islam opens the door to many avenues by which injustice is avoided while investment still takes place. Hence, profit-sharing agreements on business loans are allowed while fixed interest payments are not.

Fraud and deception are also forbidden in Islam. This would include intentionally concealing defects in one's merchandise or work. One time the Prophet (peace be upon him) was in the marketplace and he put his hand into a pile of grains and he found that it was wet on the bottom. He asked the vendor about it and the man told him that rain had fallen upon it. So the Prophet (peace be upon him) told him, “Why did you not put it on top of the grain so people could see it? Whoever deceives is not from me.”[16]

Ibn Maajah records that the Prophet (peace be upon him) said in another hadith stressing the aspect of brotherhood and its relation to business dealings, “A Muslim is a brother to a Muslim. It is not permissible for a Muslim to sell something defective to his brother without making that [defect] clear to him.”[17]

Other Forbidden Sources of Wealth

In this chapter, the interactions of a believer were discussed. The true belief in God should permeate every aspect of an individual’s life, especially his interaction with others of God’s creation. Thus, starting with how he treats himself, the individual realizes that he is one of God’s creatures and therefore must treat himself in a way that is pleasing to God. In order to achieve this goal, Allah has mercifully sent humans clear guidance to teach them how to behave even with respect to their own selves.

The individual created by God obviously, then, cannot claim for himself the right to treat others in any way he wishes. Again, Allah has provided guidance in this area as well. Whether it is with respect to one’s parents, children, neighbors, others in society—even animals and inanimate objects such as wealth—there is a way of behavior that is representative of one’s belief in Allah. It behooves a believer to learn this proper behavior and to exert himself to live by it in his life to the best of his ability. 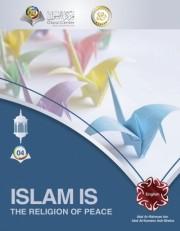 Islam is The religion of peace 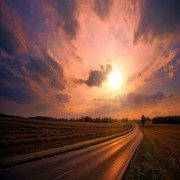