The disbelievers regarded it as incredible that Allah would send a human messenger. This delusion originated from their inability to appreciate their worth as human beings, and the honor that Allah has conferred upon humankind over His other creatures. It also originated from their inability to understand the nature of the universe and that of angels1. Allah says Almighty:

(Nothing prevented the people from believing when guidance came to them except that they said, “Has Allah sent a human as (His) Messenger?” Say, “If there were angels walking peacefully on the earth, We (Allah) would have sent down to them from the heaven an angel as a Messenger.”) (Al-Isra’ 17: 94-95).

They attacked the Prophet’s humanity and used it as basis for raising doubts about his Message and rejecting it. Allah says Almighty:

With their hearts distracted, those who do wrong conceal their private counsels, (saying), “Is this (Prophet) except a human being like you? Will you submit to magic while you see it

(And they say, “What is this messenger that eats food and walks in the markets? Why is not an angel sent down to him to be with him a warner?) (Al-Furqan 25: 7)

It is the dictate of Allah’s Constant Law that messengers should be humans who live through all human experiences of birth and death, love and loss, prosperity and adversity, illness and healing, defeat and victory, want and fulfillment, struggling, livelihood, marriage, family, progeny… and He made the last of them, whose Message shall continue to the end of time, the most perfect example of a man living on earth, encompassing the various themes of life.

All messengers had a bodily form. Allah did not create for them bodies then made them not eat! (We (Allah) did not make them (the messengers) bodies not eating food, nor were they immortal.)5 Eating is from the exigencies of corporality, and corporality is from the exigencies of humanity, and being created as humans, they are not immortal. This is the constant established Law of Allah, which will remain forever changeless.1

Real, living words are the ones that can influence and guide people, because they see them materialized, translated into life. Human messengers live a human life, which becomes an embodiment of their law and their behavior a living model to what they preach.

Had the messengers been non-humans who did not eat, sleep, marry, have a social life, or human feelings and emotions struggling within them, there would not be any rapport between them and people. They would not sympathize with the impulses that motivate humans and, similarly, humans would not follow their example.

Those who claimed in the past that the messenger should be an angel are just like those who claim today that the messenger is far above human emotions. All of them fail to realize the truth. Angels do not live the life of humans because of their special nature and shall never live it. A messenger must be a human, must have human needs and emotions, and must experience them in his real existence in order to delineate through his own life the practical code of living that serves as an example to his human followers.2

These followers are the ones who in turn will shoulder the trust after the death of the messengers, as did Abu Bakr As-Siddiq may Allah be pleased with him (nicknamed the Trustful) upon the death of Prophet Muhammad (pbuh).

The Companions were stunned by the news of his death, but Abu Bakr t was the most resolute among them. He went out to the people and addressed them, saying: “Whoever among you worships Muhammad (pbuh), Muhammad is dead. But whoever worships Allah, Allah is alive and shall never die. Allah says, (Muhammad is no more than a Messenger, and indeed Messengers have passed away before him. If he dies or is killed, will you turn back on your heels (as disbelievers)? And he who turns back on his heels, not the least harm will he do to Allah; and Allah will reward the grateful.)” (Al-‘Imran 3: 144)3

‘Abdullah bin ‘Abbas t said: “By Allah, as if people never knew before that Allah had revealed this Ayah until Abu Bakr recited it and all the people heard it from him. I then heard everybody reciting it.”4

Prophet Muhammad (pbuh) succeeded. He (pbuh) made his Companions a living embodiment of his faith, eating food and walking in the markets. He (pbuh)made each of them a living Qur’an walking on earth; each of them a visual example of Islam. When people saw them, they saw Islam incarnate.

A Divine Book alone will do nothing. The Qur’an alone will not work unless it is materialized through people, and principles will not survive unless they become adopted behavior. 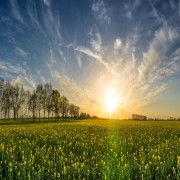 Do not listen to this Qur’an!

If this is the truth, rain down upon us stones from the sky!