How Can New Muslims Cope in the Workplace?

The world of work can cause many challenges for Muslims who are trying to live their life according to Islamic principles. But for a new Muslim these challenges can be greater, especially during the time of their transition from their old life to their new life.

For most new Muslims who have grown up in the West, it’s usually a given that once they leave school or university they will look for a job to support themselves.

Decisions about what type of work they do will have been based on the principles that they adhered to before Islam.

But once they have accepted Islam as their way of life and said their Shahadah, another set of principles and guidelines come to play; some of which may conflict with the decisions they had previously made.

So how can this be managed?

There is no one single answer, as every situation is different, but below are some thoughts on some of the challenges that may be faced.

In Islam, the responsibility of supporting the family financially falls to the husband or the father, so if a man is able to work, he should do whatever is necessary and lawful to meet his responsibilities.

But for a woman, if she is married and her husband can support her, she would be able to not work at all. This concept can seem quite strange to a woman raised in the West, especially if she doesn’t yet have children, and it can take some time to adjust to the role shift permitted by Islam.

However, for many women, their current situation may dictate that they have to work because they need to support themselves financially, they have debts or loans that they need to pay off, or their husbands need them to share the responsibility with them.

The question then becomes, if work is available, where is the best place to work and what needs to be considered?

Prophet Muhammad (peace be upon him) said:

“The son of Adam will not be dismissed from before his Lord on the Day of Resurrection until he has been questioned about five things: his life and how he spent it, his youth and how he used it, his wealth and how he earned it and how he disposed of it, and how he acted upon what he acquired of knowledge.” (At-Tirmidhi)

So what are the implications of that for a new Muslim who is maybe in a job that involves alcohol, pork, interest, gambling, girly magazines or any other manner of forbidden factors?

If it’s easy to leave that job or to become your own boss, that would obviously be the best thing to do, as soon as possible, but that isn’t always easy, especially in the current economic climate or if you have obligations that need to be met. In cases of necessity, the Islamic ruling is to take the least harmful option, but only to the extent that it is necessary to meet the need. So if you have to work, you should be looking for lawful alternatives.

Even if the activity of the workplace is lawful, there may be other challenges that have to be overcome in order to fulfill your Islamic responsibilities. Some of which will be touched on here.

Praying the obligatory prayers at work within the correct time for prayer is something that many people find challenging, especially new Muslims who are just learning to pray. It may be that they are nervous about telling the people they work with that they became Muslims, it may be that they are uncomfortable with the prospect of someone else possibly seeing them pray when they aren’t yet confident about it themselves, or it may be that their particular type of work makes it difficult to take breaks at the times they would need to.

The sooner you take steps to work out how to start praying at work, the easier it is. In most Western countries there are laws that enable people to perform religious obligations at work, and, as prayer is an obligation on you, your workplace is obliged to let you pray, as long as you still do the work and the hours that you are contracted to do. For most people, praying needn’t disturb the work routine too much; it can usually be performed during a lunch break and an afternoon tea break, as these can usually be timed to fit in with the prayer times.

You can pray anywhere at work (except in the bathroom), as long as the place is clean and quiet, and you have enough room to prostrate. So, if your workplace doesn’t have a dedicated place for prayer, you can use any quiet unused room, a store room or even a stairwell that’s not used much. A tip that I find useful is to utilize the ruling of wiping over thin socks when doing ablution (wudu’). This can avoid a lot of embarrassing moments for work colleagues catching you with your feet in the washbasin.

Starting to wear hijab at work is a massive step for many new Muslim sisters. They imagine that it will completely change their relationship with their colleagues and may even cause some people to reject them altogether. This rarely happens in reality. Most working environments are generally tolerant of diversity these days, and the difference is felt more by the person putting on the hijab, as it’s a very significant step in her life, than it is by her colleagues, who may not be that surprised if they have noticed other subtle changes happening.

Some women bite the bullet and put the hijab on very early in their life as Muslims, and that can sometimes be easier. Although hijab isn’t one of the five Pillars of Islam, yet it is an obligation that should be worked towards as you begin to understand its Islamic significance. Prophet Muhammad (peace be upon him) said:

“Actions are but by intentions…”

So it should be done to gain the pleasure of God and not worn just as a fashion item or to fit in. Many sisters find it easier to gradually islamicize their clothing and gradually starting to wear longer and looser clothing when they go out.

Avoiding being alone with someone of the opposite gender, or Khalwah, can be quite a challenge in many workplaces. The fact that anyone could walk in the room stops it being the forbidden Khalwah, but it is advisable wherever possible not to spend much time alone with someone of the opposite gender, as the workplace is notorious for being a place where illicit relationships develop due to shared interests and proximity.

If as a woman you do have to work closely with men, try to follow the general guidelines when in mixed gender situations, i.e. wear hijab or as close to it as you are ready to, stay in the open or have others around you whenever possible, avoid intense eye contact and touching, keep discussions work-related avoiding personal topics and use a work-like tone of voice. And men should do likewise when with women. Insha’Allah this will help to avoid potential problems.

Another area that some people find difficult is how to cope with work-based socializing, both within the workplace and after work. It’s preferable to develop relationships with people of the same gender at work, although the challenge here can sometimes be how to avoid being pulled into gossip or lewd conversations and to avoid alcohol-linked activities and yet still retain a friendly relationship.

It may be that pulling away from these types of situations may start to change your friendships with your colleagues, but if you focus on the fact that you’re doing it for the sake of Allah it will make it easier. Your friendships are likely to change anyway, once you have said your Shahadah, as your interests will start to shift. It is however important to maintain good relationships as far as possible with work colleagues, as this can be a very powerful form of Dawah.

In Islam, work is regarded as an act of worship if certain conditions are met and it is permitted for both men and women to work. As the Prophet said:

It is far better to work and support oneself earning a lawful living in a lawful manner, than to live off others or the State.

{Whoever works righteousness, man or woman, and has faith, verily, to them will We give a new Life, a life that is good and pure, and We will bestow on such their reward according to the best of their actions.} (Quran 16: 97) 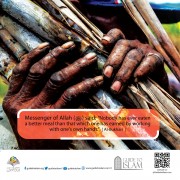 The importance of work in Islam