Joining the Ties of Kinship

All praise is due to Allâh, Lord of all the worlds. Peace and blessings be upon the Messenger, his household and companions.

Fellow Muslims! Fear Allâh and be dutiful to Him. Return rights to their due owners, Allâh will give you great reward and will save you from painful torments.

Dear brethren! Know that your Lord, out of His mercy, explains everything to you in His Book. His Messenger Muhammad, blessings and peace be upon him, has also guided you to the right path that will lead you to Paradise, save you from Hell and make you attain the happiness of this world. He explained to you the rights of Allâh upon His slaves, for the rights of Allâh upon us are the greatest of those things that He has made obligatory for us. However, Allâh requests us to perform only those things that we are able to. It is Allâh’s right upon us that He should be remembered and not be forgotten, obeyed and not disobeyed, and thanked for all His favours. This will make our life peaceful and blessed, under the shadow of His mercy, free from afflictions. Our life will be full of cooperation and love.

Allâh also explains for us the rights of the parents, the rights of the kith and kin and the obligations of the relatives to one another. Each person will be held accountable on this in this world and the Hereafter. If one fulfils these rights one will attain great degrees with Allâh. If one fails to fulfil these rights one will earn the wrath of Allâh.
Brethren in faith! Joining the tie of kinship is one of the greatest responsibilities of man. The kith and kin are the ones with whom one has blood or marriage relationship. Allâh emphasises the importance of the kith and kin in many places in His Book. He says,

Allâh mentions joining the tie of kinship after He mentions the fear of Him. He says,

“And give to the kindred his due and to the poor and to the wayfarer. But spend not wastefully (your wealth) in the manner of a spendthrift.”

It is the because of the importance of joining the tie of kinship and the fact that it is a fundamental element of morality and virtue that Allâh made it obligatory for nations that were before us. Allâh says,

“Fear Allâh through Whom you demand (your mutual rights), and (do not cut the relations of) the wombs (kinship). Surely, Allâh is Ever an All-Watcher over you.”

In a hadîth reported by Al-Bukhârî on the authority of ‘Abdullâh Ibn Salâm, the first statement that Allâh’s Messenger made when he entered Al-Madînah was,

“And (remember) when We took a covenant from the Children of Israel, (saying): Worship none but Allâh (Alone) and be dutiful and good to parents, and to kindred, and to orphans and the poor, and speak good to people (i.e. enjoin righteousness and forbid evil, and say the truth about Muhammad (peace be upon him)) and perform As-Salât (Iqâmat-as-Salât), and give Zakât.”

 “O you people! Spread salâm, give food [to the hungry], be kind to the kith and kin and pray [in the middle of the night] while people are sleep, you are enter the Paradise of your Lord with peace.” Being kind to the kith and kin brings urgent reward in this world, in addition to the reward of the Hereafter. Abû Hurayrah said, “I heard the Messenger of Allâh say: ‘He who wants his wealth increased and his life prolonged should be kind to his kith and kin.”

 “Let him who wants his life prolonged, his wealth increased and wants evil death kept away from him fear Allâh and be kind to his kith and kin.”

“Allâh gives long life to some people in their abode and increases them in wealth, though He does not look at them once since He created because of His dislike for them.” The companions asked, “Messenger of Allâh, how is that?” He answered, “It is because they join the ties of kinship.”

 “No sin deserves immediate punishment in this world in addition to the punishment of the Hereafter than severing the ties of kinship.”

Dear brethren! Being kind to the kith and kin brings peace of mind, increases mutual love among relatives and makes life blessed. The Muslim is required to be kind to his kith and kin even if they are doing the opposite to him. Abû Dharr said,

 “O Messenger of Allâh, I have relatives with whom I try to have close relationship, but they sever (this relation). I treat them well, but they treat me ill. I am sweet to them but they are harsh towards me. Upon this the Prophet said: If it is so as you say, then you in fact throw hot ashes (upon their faces) and there would always remain with you from Allâh (an Angel to support you) who would keep you dominant over them so long as you adhere to this (path of righteousness).”

 “The one who reciprocates the good done to him by a relative is not the one who joins the tie of kinship. He is rather the one, when his relatives treat him badly he treats them well.”

Severing the ties of kinship is a curse in this world. It causes evil, depression, people’s hatred especially the relatives, misery in this world and a painful torment in the Last Day. Abû Hurayrah narrated that Allâh’s Messenger said,

 Allah created His creation, and when He had finished it, the womb, got up and caught hold of Allâh whereupon Allâh said, “What is the matter?’ On that, it said, ‘I seek refuge with you from those who sever the ties of Kith and kin.’ On that Allah said, ‘Will you be satisfied if I bestow My favours on him who keeps your ties, and withhold My favours from him who severs your ties?’ On that it said, ‘Yes, O my Lord!’ Then Allah said, ‘That is for you.” Abu Hurayrah added: If you wish, you can recite: “Would you then if you were given the authority. do mischief in the land and sever your ties of kinship.”

 “On every Thursday in the eve of Friday, deeds of human are presented to Allâh. The deeds of any person who severs the ties of kinship will not be accepted.”

“Ibn Mas’ûd was sitting down in company of a group after Fajr prayer one morning. He then said, “I implore every severer of the tie of kinship to leave this gathering of ours, for we want to supplicate to our Lord. The doors of the heaven are closed against those who sever the tie of kinship.”

 “Three people shall not enter Paradise. They are: “The alcoholic, the severer of the tie of kinship and the believer in sorcery.”

Fellow Muslims! Joining the tie of kinship means being generous to them, desisting from harming them, visiting their sick, supporting the poor among them, guiding the errant, teaching the ignorant and visiting them frequently. It also includes sharing in their joy and sadness, protecting them in their absence, respecting the elderly among them, being compassionate with the young ones, bearing their mistreatment with patience, relating with them in the best manner and wishing them well.

Brethren in faith! Severing the ties of kinship has become commonplace these days and the hearts of many people has been corrupted. This is caused by many people’s avarice for the dishonourable materials of this world. Blessed is therefore, be the one who considers the consequences of things, fulfils the rights due upon him, looks up to Allâh for his rights that the people owe him and deals with others as he would like to be dealt with.

Severing the tie of kinship can become deep-rooted that the children inherit it from their parents, thereby causing a lot of evil, destruction, aggression and enmity. Bad relation can also persist among members of the same family until death separates among them. It is then that they will regret and be saddened by what they have done while it will be too late. Their only place of meeting will be the Day of Resurrection when Allâh will judge among them.

Dear brethren! Patience, tolerance and forgiveness are the best of all conducts. They are also the best remedy for the sorrow caused by relatives. ‘Uqbah Ibn ‘Âmir narrated, “I met the Allâh’s Messenger and I held his hand and said, “O Messenger of Allâh, tell me about virtuous deeds.” He said, “

 ‘Uqbah, join the tie of kinship with your relative who seeks to sever it, give to him who denies to give to you and turn away from [or forgive] him who wrongs you.”

Fellow Muslims! The woman may be a cause of severance of ties of kinship through tales that she carries about, shortcomings that she spreads, good things that she conceals and troubles she causes among men. In her folly, she might think that doing so is in her interest and she might drive her children into mistreating their relatives. She shall bear the sin of this.

On the other hand, she can be a cause for strengthening relationship and love among relatives through her patience, her well wishing for her husband and children and her nurturing of her children upon righteousness. Allâh will strengthen such a woman, put her affairs aright and bless her with good ending.
Dear Muslim women! Fear Allâh and promote peace among the relatives. Do not let the tie of kinship be severed at your hands, for nothing you do is hidden from Allâh. Allâh says,

Brethren in Islâm! Fear Allâh and respect the commandments of Allâh by implementing them. Respect His prohibitions by abstaining from them.

“So give to the kindred his due, and to Al-Miskîn (the poor) and to the wayfarer. That is best for those who seek Allâh’s Countenance; and it is they who will be successful.”

Perform righteous deeds against the abode of the Hereafter whose bliss is everlasting and whose dwellers will never die. Be afraid of Hell whose fuel is men and rock and whose punishment is severe. Its depth is intense. The food of its dwellers shall be from Zaqqûom, their drink shall be of purulent water and their garments shall be of liquid pitch and steel.

“And be afraid of the Day when you shall be brought back to Allâh. Then every person shall be paid what he earned, and they shall not be dealt with unjustly.”

In a Qudsî hadîth, the Prophet narrated that Allâh says,

 “O My slaves! These are your deeds which I accurately recorded for you. Let him who finds good [results thereof] thank Allâh and praise Him, and let him who finds otherwise not blame but himself.”

Fellow Muslims! Remember a Day when records of deeds will be distributed and in which some will receive their record with their right hand and some with their left. Allâh is unjust with His slaves. 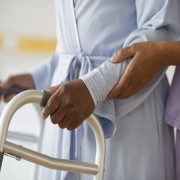 How Do Muslims Treat the Elderly?