The Muslim considers justice in its general context to be one of the most obligatory and necessary obligations, since Allah commanded it in His saying:

The meaning of equity is that of justice, and “the equitable” means “the just.” Allah ordered justice in speech as well as in judgements.

“And whenever you give your word (i.e. judge between men or give evidence), say the truth even if a near relative is concerned.”

“Venly, Allah commands that you should render back the trusts to those whom they are due; and that when you judge between men, you judge with justice .”

Therefore, the Muslim is just in his speech and judgements, his every affair is attended to with justice, to the degree that being just becomes a trait he is described with, not denied of him. His sayings and actions are based upon justice with no degree of discrimination, oppression or tyranny. He abides by justice without giving in to any type of desires, thereby deserving Allah’s love, acceptance, honor and help. For Allah has informed that He loves the equitable, and Allah’s Messenger ﷺ has informed of position of honor before their Lord, saying:

 “The equitable will be seated upon pulpits of light before Allah : those who do justice in their decisions, with their families, and what is entrusted to the.”

 “Seven will be shaded by Allah on the Day when there will be no shade except His: A just ruler. A youth, who grew up with the worship of Allah. A person whose heart is attached to the mosque. Two people, who love and meet each other and depart from each other for the sake of Allah. A man whom a beautiful and high-ranking woman seduces, but he (rejects this offer and) says: ‘I fear Allah’. A person who gives charity and conceals it such that the left hand does not know what the right hand has given. A person who remembers Allah in solitude and his eyes overflow (with tears)”

1. Justice with Allah the Almighty: by worshipping Him Alone without associating any with Him while worshipping Him, in His Attributes or otherwise. And that He is obeyed, not disobeyed; remembered, not forgotten; and that one is
grateful to Him, not ungrateful.

2. Justice in judgements between people: by giving every rightful person his due.

3. Justice between wives and children: by not giving one preference over another.

4. Justice in speech: by not testifying falsely, nor saying what is false or a lie.

5. Justice in what is believed: by not believing other than the truth and not lending faith to what is not realistic or what did not occur.

An Example of Just Judgement

A man from Egypt entered upon ‘Umar bin Al-Khattab while he was sitting and said: “O Leader of the Faithful! Before you is one who seeks refuge.”

‘Umar said, “You have sought it from one who can give protection, so what is your case?” He said, “I was beating the son of ‘Amr bin Al-‘Aas in a horse race, so he prevented me by hitting me with his horse whip, saying; ‘I am the son of the honorable ones.’ When his father ‘Amr bin Al-‘As learned of this incident he immediately imprisoned me fearing that I would come to you to complain. I was released, and it is from there that I arrive now.”

So ‘Umar sent a letter to ‘Amr bin Al-‘Aas, who was then the governor of Egypt saying: “When you receive this letter of mine, then come to me along with your son so-and-so during the Hajj season.” ‘Umar ordered the Egyptian to stay until they arrived. ‘Amr bin Al-‘Aas arrived and performed Hajj. When ‘Umar finished Hajj and he was sitting among the people ‘Amr bin Al-‘Aas and his son were seated next to him. Then the Egyptian stood up, ‘Umar handed him a whip, and he began hitting him. He continued doing so until those present wanted him to stop because of the many blows he had given him.

‘Umar said: “Beat the son of the most honorable ones.” The Egyptian man responded to ‘Umar: “O Leader of the Faithful! I have been fulfilled and. satisfied.” ‘Umar said., “Put it on the bald head of ‘Amr.” He responded: “O Leader of the Faithful! I have struck the one who struck me.” ‘Umar said, “By Allah, if you take more revenge from him, none would dare to stop, you except yourself.” Eventually, ‘Umar said to ‘Amr bin Al-‘Aas: “O ‘Amr! When did you begin to enslave and subjugate people, while their mothers have given birth to them as free people?”

One of the best results of justice in judgements is that it instills tranquility in the the hearts of the people. It is reported to have been said that once Caesar sent a messenger to ‘Umar bin Al-Khattab to monitor his activities and situation. When his envoy entered Al-Madinah, he started searching for ‘Umar and asked, “Where is your king?” They replied, “We do not have any king but an honored ‘Amir. He went outside of Al-Madinah.” So he went looking for him and discovered him sleeping on the sand using his stick as a pillow. This was a small staff, which he always carried with him, and he used it to stop others when they were doing evil. When he saw him sleeping like that, he sensed humility in his heart and said to himself, “This is the man whom all the kings are worried about, yet look at his condition. O ‘Umar, you have been just so you can sleep. While our king is a tyrant, so there he stays up the whole night in fear.”

Moderation has a wider meaning than justice. Moderation affects every part of the Muslim’s life. It is the method of seeking the middle way between two extremes. Moderation in worship means it should be free from any kind of extremism or negligence.

Moderation in spending means the good that is between way evils, not spending irresponsibly nor being stingy, but the position in between the two. Allah the Almighty says:

“And those who, when they spend, are neither extravagant nor stingy, but hold a medium (way) between those (extremes).”

Moderation in clothing means that it should neither be the clothing of arrogance or pride, nor should it be patched or ripped.

As for moderation in walking, it is to walk in a manner between arrogance and haughtiness, and humility and subjugation. Moderation in every circumstance is the middle between two extremes.

Moderation is the brother of uprightness. It is one of the most noble of virtues and traits, since it is that which stops a person from surpassing Allah’s set limits, promoting the performance of the obligatory duties, without falling short or exaggerating. It teaches him to be abstinent, taking what is lawful over that which is not.

Moderation is sufficient enough pride and honor for its practitioner, as Allah said:

If they (non-Muslims) had believed in Allah, and remained on the Right Way (i.e., Islam) We should certainly have bestowed on them water (rain) in abundance.

“Verily, those who say: “Our Lord is (only) Allah,” and thereafter stand straight, on them shall be no fear, nor shall they grieve. Such shall be the dwellers of Paradise, abiding therein (forever) a reward for what they used to do.” 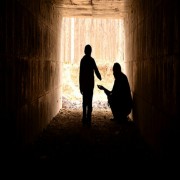 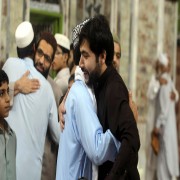