• God, according to Islam, is not a distant, unconcerned, or silent God. This is abundantly clear throughout the Qur’an. For example, God declares that in every instant He is nearer to every human being than their jugular vein:

“And indeed We (God) have created man, and We know what his ownself whispers to him. And We are nearer to him than his jugular vein.”

He certainly knows whatever their bosoms conceal, and whatever they say and do, in public and in private; nothing is hidden, everything related to them is exposed before His Eyes:

“I am All-Aware of what you conceal and what you reveal.”

“And verily, your Lord knows what their breasts conceal and what they reveal.”

He hears their words, sees all their circumstances, and knows whatever they are going through or have been through. He is never inattentive or uncaring; so, let them be calm, peaceful, and confident:

“Fear not, verily! I am with you both, hearing and seeing.”

He is always close to them, hearing and seeing. He responds to the invocation of any supplicant who calls upon Him, and He answers the prayers of the distressed ones even they are transgressors, sinners, or disbelievers, as long as they seek Him alone, stand at His Door, and rely on His Help.

“And when My servants ask you (O Muhammad) about Me, indeed I am near. I respond to the invocation of the supplicant when he calls upon Me.”

And He has angels guarding and watching over each human soul at all times:

“There is no soul but that it has over it a protector.”

• God uses many Names and Attributes in the Qur’an to describe Himself to humanity, such as The Truth, The Holy, The Almighty, The Self-Sufficient, The Guardian, The Bestower, The Compassionate, The Loving, The Wise, The Judge, The Knower, The Avenger of evil, and The Ever-Forgiving.

• Humans can understand God’s Attributes, since they possess or experience them in some manner, in varying degrees, and in a mode appropriate to their human capacities and finite nature. Qualities such as hearing, seeing, compassion, and patience have been woven into their being; they are immediately familiar to them and they can practice them spontaneously, even though only God possesses them in an all-encompassing, absolute manner. So they can use their own attributes as a unit of measurement to recognize God’s Eternal and Perfect Attributes.

• Through His Divine Names and Attributes, humans can get a feel for God and His presence. Each Name and Attribute touches a particular chord, awakens a new consciousness, supplies a different need, engenders a special affection, and allows a close and dynamic relationship with God.

• In a noble Qur’anic verse, God asks to be sought by His Names –

“To God belongs the Most Beautiful Names; call upon Him therewith.”

– such as ‘The Forgiving’ for forgiveness and ‘The Healer’ for healing, using the attribute most appropriate to what humans are asking for.

• Humans do not need to, nor should they, look for miracles or extraordinary phenomena when they look for God. They need only look within, at their natural selves, and around them, at the natural world, to discover God.

• A watch implies a watchmaker. The evidence is even stronger for living creatures, from the largest planet down to the most microscopic creature, as their design is far more brilliant and complex. So a world implies a world maker — God.
• The miracles of God’s creations are as manifest in the smallest as in the most gigantic of His Works; in the construction of an ant as in that of an elephant; in the complex structure of cells as in that of galaxies; in deep, tiny, underwater crevices as in rushing rivers and high mountains; and in the warbling of birds as in the roaring of thunder.

• The whole of the cosmos, being continuously filled and emptied of living beings, stands as a comprehensive sign of its Creator and a vast, inexhaustible book describing its Single Author. The Qur’an – in hundreds of verses – does not merely ask, but provokes and appeals to the eyes, ears, and minds to open up to the universe and think of its wonders in order to know God.

• One such motivational verse of the Qur’an says:

“Verily, in the creation of the heavens and the earth; in the alternation of the night and the day; in the sailing of the ships through the sea with that which profits humankind; in the rain which God sends down from the sky, with which He revives the earth after its death and spreads in it every kind of moving creature; and in the veering of the winds and the clouds which are held between the sky and the earth, there are signs for people who use reason.”

• What makes humans different from other creatures is their need to be intellectually convinced. The Qur’an constantly appeals to reason and abounds with verbs that urge humans to acquire knowledge through reliance on the mind, and also the senses through careful observation. Such verbs include Tafakkur (contemplation), Tadabbur (deliberation), Tabassur (insight), Tadhakkur (remembrance), Tafaqquh (comprehension), Ta`aqqul (reasoning), Nazr (contemplative looking), I`tibar (deriving lessons), and Tawassum (understanding signs).

“Do they not look into the realm of the heavens and the earth and everything that God has created…?”

“Do they not look…” by way of reasoning and conclusion.

“…into the realm of the heavens…” including the sun, the moon, the stars, and the sky.

“…and the earth…” including the forests, the oceans, the mountains, the animals, the birds, the insects, and the trees.

“…and everything that God has created…” all the incalculably, innumerably, infinitely myriad creatures of God which fall under the umbrella term “things.”
Qur’anic Interpretation by Al-Qasimi (Mahasin Al-Ta`wil)

The Qur’an reminds that creation speaks of the Creator.

Though God is invisible, His existence and aspects of His Character are revealed through His Work.

“In the earth are neighboring plots, gardens of vineyards, crops, and date-palms, growing from the same root or alone. They are all watered with the same water, yet We (God) make some better tasting than others. Surely, in that are signs for people who reason.” 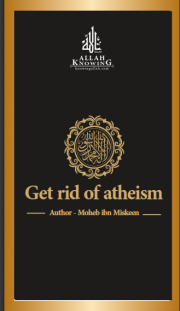 Get Rid of Atheism 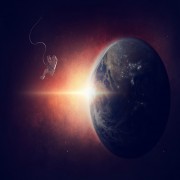