Love in the Prophet’s Home

A foremost characteristic of life in the home of the Prophet (peace and blessings be upon him) was love. Love is the quality most necessary to ensure happiness. When love is present, happiness is assured.

The Prophet preferred a life of poverty, which was sometimes close to, if not below, the subsistence level. Yet this did not detract from the fact that his was a very happy home, with love spreading from its rooms to those who were associated in any way with the Prophet’s family.

Should love be removed from the life of any family, happiness becomes lacking for everyone, no matter how affluent the family may be.

Wealth can buy comfort and luxury, but it cannot buy love and happiness. Muhammad (peace and blessings be upon him) experienced first a life of poverty when he was brought up by his uncle Abu Talib, who had a large family and small means.

The Prophet had to work and earn his living when he was still in his early teens. Then he experienced a life of comfort and plenty when he lived with his first wife, Khadijah, who was rich and he looked after her business.

Then in Madinah, he lived a life of poverty, even though he could have had whatever he wanted. He was the head of state and all its resources were at his disposal. Yet he preferred to live on the borderline of poverty. When he had more than enough for his family’s needs for the day, he gave away all that was extra.

His life with Khadijah was the symbol of happiness. She cherished his company and looked after him in the most exemplary way. She realized that he combined characteristics of the noblest type that made him unique among men.

On her part, Khadijah combined beauty, good sense, mature judgment, and a loving and generous heart. They were the happiest of couples. They lived together for 15 years or longer before he began to receive his message. Theirs was a happy life of a loving couple.

When he received his message, she realized that her task became greater, and she fulfilled it with exemplary devotion. He might spend a whole day speaking to people and telling them about Islam, stressing that they needed to believe in God as the only deity in the universe, and receiving nothing but one hostile reaction after another.

Yet he was assured that once he steps home, a comforting heart will be there to receive him and dispel all that troubled his caring soul. He was pained by the fact that people could not realize that the guidance he gave them was for their own good and happiness in both this life and the life to come.

Khadijah was his only wife for 25 years or longer. When she died, she left a huge vacuum in his life that no woman could easily fill. Later, the Prophet needed to marry several other women with social, political or legislative reasons leading to each of his marriages.

Allah allowed him any number of wives, exempting him from the condition that allows man no more than four wives at the same time. Despite the fact that some of these marriages were in quick succession, love spread its wings on the Prophet’s homes, with all inhabitants benefiting from it.

No man’s life was documented in such details as the Prophet’s life, yet we do not have a single incident when any of his wives felt anything other than love toward him. Never was any of them hurt by an angry word or an insult. He never raised his hand in earnest or in jest to express an angry feeling.

`A’ishah was the one he loved most, but this did not mean that he did not love the others. He felt for them and prayed that God would not hold him accountable for his feelings, which were beyond his control.

Yet his treatment of all his wives was an exemplary exercise in complete fairness. However, `A’ishah knew how to impart her feelings to him without putting this in words. The Prophet once told her that he knows when she is pleased or angry with him. As she was keen not to let her anger surface, she was surprised. She asked him: “How do you know that?” He said:

It was the love he emanated in his family life that made each of his wives happy with her situation, despite the fact that there were several others sharing the same position with her. None would exchange her position as the Prophet’s wife for being the wife of any man on earth.

When they all joined together in demanding a better standard of living, he was angry with them and left them all for a whole month. After that he gave them the choice that he would either divorce them and give them plentiful gifts or they would remain with him accepting the sort of life he gave them, which was one of hard poverty. Every one of them said unhesitatingly that she would stay with him and never make a similar demand.

We should remember that divorce in their society was accepted as normal, and a divorcee or a widow could easily be married again.

Yet none of them would contemplate for a moment living with any man after having been the Prophet’s wife. It was such exemplary love that pulled them toward such a happy life.

Hence, God admonishes them to be grateful for their lot, and to remember the supreme wisdom that is recited in their homes, as it is revealed from on high to their husband, Muhammad (peace and blessings be upon him).

Allah also elevated their rank, making them mothers of the believers, in all generations. Each one of them is Umm Al-Mu’mineen, i.e. Mother of the Faithful. This was a real status, and all their contemporaries treated them as such. Later generations of Muslims venerated them in the same way. As mothers of all Muslims, they could not marry anyone after the Prophet had died. Thus, they kept this status for all times. 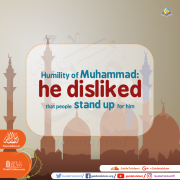 His Manners and Ethics – The Prophet’s Humbleness (PBUH)

"Fear Allah wherever you are"