Manners of Relieving Oneself

· To learn the manners of relieving oneself outlined by the Prophet, may the mercy and blessings of Allah be upon him.

· Qiblah - The direction one faces during the formal prayers.

·Salam - The Islamic greeting such as 'As-Salamu Alaikum'.

Something as mundane as relieving oneself is tied to a Muslim’s sense of cleanliness and modesty.  There is nothing odd or strange about it, as Islam literally is all encompassing, something that evokes a pleasant surprise in some people.  Even in the time of the Prophet, there was a polytheist who exclaimed with astonishment to Salman, the Persian,

Your Prophet has taught you everything, even how to defecate!”  Salman responded, ‘“Yes, he forbade us to face the direction of Mecca when urinating or defecating

In this lesson we will detail the manners of relieving oneself, something apparently minor, but implies much about personal hygiene and religious observance.

(A)   Supplications before Relieving Oneself

There are certain supplications one should recite when entering or leaving the place one relieves oneself, whether it be in a bathroom or in nature.

(a)  One should say “Bismillah” (I begin with the Name of Allah) before entering,

because the Messenger of Allah said:

The eyes of the jinn are blocked from seeing the nakedness of the sons of Adam when one of them says before entering the place for relieving oneself, ‘Bismillah.’”

O Allah, I seek refuge with You from male and female devil.

Enter with your left foot.

Out of respect a Muslim should not face the qiblah[1] when urinating or defecating.

When any one of you sits down to answer the call of nature, he should not face the qiblah or turn his back towards it.

When outdoors, one should not uncover their private parts until they squat close to the ground, as it is more concealing.[4]  Indoors, first make sure you have closed the door and are out of sight.

Outdoors, it is best to answer the call of nature sitting.  It is better to adopt a posture that is more concealing, one which will cause no splash-back on yourself or your clothes.  If there is a need and a person does not fear splash-back, it is permissible to urinate standing up.

One must take great care to avoid the splash-back of urine, both on themselves and their clothes.  If urine or stool soils some part of body or clothes, those areas must also be washed, and the impurity must be totally removed from them.  The Messenger of Allah passed by two graves, and

Indeed they are being punished, but for something which seemed trivial to them: this one used not to guard himself from urine, and the other used to walk about spreading malicious gossip

Islam forbids urinating in places where people might pass by, or seek shade therein, such a park, because it is something disturbing to people.

Also, it is forbidden to urinate in stagnant water, as it was forbidden by the Messenger of Allah.[5] It obviously makes the water impure and will disturb those who use it.

Don’t say, ‘As-Salamu Alaikum’ to a person who is answering the call of nature, or reply with ‘Wa Alaikum Assalam’ while relieving yourself, out of respect for God’s name.  Al-Salaam is one of Allah’s beautiful Names.

A man passed by the Prophet while he was urinating, and greeted him with Salam.

The Messenger of Allah said to him

If you see me in this state, do not greet me, because if you do, I will not respond

It is disliked to speak while relieving oneself unnecessarily.

Urinals should be avoided for four reasons.  First, there is no privacy.  Private parts are exposed, which is indecent and forbidden.  Second, it is almost impossible to avoid splash-back.  Third, there is no toilet paper. Fourth, people sometimes talk while urinating, an activity better left outside the toilet!

One should not touch the penis with the right hand when urinating,

because the Prophet said

It is not allowed to wipe oneself with the right hand when cleaning stool or urine; the left hand should be used for this purpose,

because the Prophet said

When any one of you wipes himself, he should not use his right hand

Toilet paper or water can be used.  It is preferable to use both.  Be careful to remove all impurities after answering the call of nature, because the Prophet warned against being careless in cleaning oneself after urinating:

Most of the punishment of the grave will be because of urine.

(c)  Any impurity should be washed or wiped thrice or more, and it is better that it be an odd number, according to whatever is needed to clean it,

because the Prophet said:

When anyone of you cleans himself do so an odd number

A word on washing hands

According to the National Institutes of Health (NIH), one in four food-borne illnesses, among many other diseases, is caused by unwashed or inadequately washed hands.  Not only is it an easy thing to do, but hand washing is considered the number one way to prevent the spread of infection.  If health officials urge it, how much more should Muslims pay attention to it?  According to the Centers for Disease Control and Prevention (CDC) and the National Institutes of Health, good hand washing requires three key elements: soap, running water, and friction.  Actively rub your hands and fingers together with soap, producing a lather that covers all surfaces of your hands (including your fingers and under your fingernails), for at least ten to fifteen seconds.  Follow that with a thorough rinse under running water.  Pay attention to rings and long fingernails, both of which trap bacteria and dirt.  To avoid recontamination of your hands, wash the faucet with water or a clean paper towel before turning it off. Better yet, one should not use the contaminated hand to turn it on in the first place. Then dry your hands with an air-dryer or new disposable towel.

(E)   Supplication on Leaving the Toilet

When leaving the toilet, exit with right foot, and say: 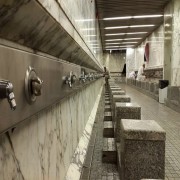 The Meaning of Purification

Purification of the Soul 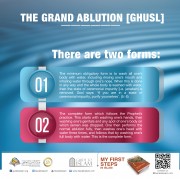