One of the ways in which a person proves his prophethood is honesty, whether it be in regards to incidents in the past, in their everyday life, or things to come in the future.  In addition to the Quran, there are many sayings of Prophet Muhammad ﷺ which contain prophecies he made in his lifetime dealing with near and distant future.  Some of them have come true, others await fulfillment.

There are at least 160 known and confirmed prophecies of Prophet Muhammad ﷺ which were fulfilled in his lifetime and the first generation after him.[1] We will mention only three here:

(1) Preceding the Battle of Badr, the first and decisive confrontation with pagan Meccans in the second year of migration from Mecca in 623 CE, Prophet Muhammad ﷺ foretold the precise spot every pagan Meccan soldier would fall.  Those who witnessed the battle saw the prophecy come true with their own eyes.[2]

(2) Prophet Muhammad ﷺ prophesized the Battle of the Confederates (al-Ahzab) would be the last invasion the tribe of Quraish (the pagan Meccans) would launch against the Muslims.It was fought in the fifth year of migration, 626 CE and was the last military conflict between the two sides. All Meccans embraced Islam after a few years.[3]

eternal by etching them in the conscious of the believers.  The ancient detractors would simply remain silent when these verses were recited.  Had these miracles not taken place, they would have seized the moment to scandalize it and belie Muhammad ﷺ. But rather, the opposite took place. The believers grew more certain of the truth of Muhammad ﷺ and the Quran. The fact that the faithful grew stronger in their faith and the silence of the unbelievers and not denying their occurrence is acknowledgment from both that the miracles took place exactly as the Quran describes.

In this section we will discuss some of the physical miracles performed by Muhammad ﷺ.

Splitting of the Moon

One of the times when God performed miracles at the hand of the Prophet ﷺ was when the Meccans demanded to see a miracle from Muhammad ﷺ to show his truthfulness. God split the moon in two separate halves and then re-joined them. The Quran recorded the event:

“The Last Hour draws near, and the moon is split asunder!”

Prophet Muhammad ﷺ would recite these verses of the Quran in large congregations of the weekly Friday prayer and the bi-annual Eed prayers (Muslim). Had the event never occurred, Muslims themselves would have doubted their religion and many would have left it! The Meccans would have said, ‘Hey, your prophet is a liar, the moon never split, and we never saw it split!’ Instead, the believers grew stronger in their faith and the only explanation the Meccans could come up with was, ‘passing magic!’

“The Last Hour draws near, and the moon is split asunder! And if they see a sign (miracle), they turn away and say, ‘Passing magic!’- for they are bent on giving it the lie, being always wont to follow their own desires.”

The splitting of the moon is confirmed through eye-witness testimony transmitted through an unbroken chain of reliable scholars so many that it is impossible that it could be false (hadith mutawatir).

A skeptic might ask, do we have any independent historical evidence to suggest the moon was ever split? After all, people around the world should have seen this marvelous event and recorded it.

The answer to this question is twofold.

First, people around the world could not have seen it as it would have been daytime, late night, or early morning in many parts of the world.  The following table will give the reader some idea of corresponding world times to 9:00 pm Mecca time:

Also, it is not likely that a large number of people in lands close by would be observing the moon at the exact same time.  They had no reason to.  Even if some one did, it does not necessarily mean people believed him and kept a written record of it, especially when many civilizations at that time did not preserve their own history in writing.

Second, we actually have an independent, and quite amazing, historical corroboration of the event from an Indian king of that time.

Kerala is a state of India. The state stretches for 360 miles (580 kilometers) along the Malabar Coast on the southwestern side of the Indian peninsula. King Chakrawati Farmas of Malabar was a Chera king, Cheraman perumal of Kodungallure.  He is recorded to have seen the moon split. The incident is documented in a manuscript kept at the India Office Library, London, reference number: Arabic, 2807, 152-173.[1]  A group of Muslim merchant’s passing by Malabar on their way to China spoke to the king about how God had supported the Arabian prophet with the miracle of splitting of the moon.  The shocked king said he had seen it with his own eyes as well, deputized his son, and left for Arabia to meet the Prophet ﷺ in person.  The Malabari king met the Prophet, bore the two testimonies of faith, learned the basics of faith, but passed away on his way back and was buried in the port city of Zafar, Yemen.[2]

It is said that the contingent was led by a Muslim, Malik ibn Dinar, and continued to Kodungallure, the Chera capital, and built the first, and India’s oldest, mosque in the area in 629 CE which exists today.

[1] It is quoted in the book “Muhammad Rasulullah,” by Muhammad Hamidullah: “There is a very old tradition in Malabar, South-West Coast of India, that Chakrawati Farmas, one of their kings, had observed the splitting of the moon, the celebrated miracle of the Holy Prophet at Mecca, and learning on inquiry that there was a prediction of the coming of a Messenger of God from Arabia, he appointed his son as regent and set out to meet him.  He embraced Islam at the hand of the Prophet, and when returning home, at the direction of the Prophet, died at the port of Zafar, Yemen, where the tomb of the “Indian king” was piously visited for many centuries.”

[2] ‘Zafar: biblical  Sephar , classical  Sapphar, or Saphar ancient Arabian site located southwest of Yarim in southern Yemen.  It was the capital of the Himyarites, a tribe that ruled much of southern Arabia from about 115 BC to about AD 525.  Up until the Persian conquest (c. AD 575), Zafar was one of the most important and celebrated towns in southern Arabia—a fact attested to not only by Arab geographers and historians but also by Greek and Roman authors.  After the extinction of the Himyar kingdom and the rise of Islam, Zafar gradually fell into decay.’ “Zafar.” Encyclopædia Britannica from Encyclopædia Britannica Premium Service. (http://www.britannica.com/eb/article-9078191)

The greatest miracle of the Prophet was the Quran. Apart form the Quran, Prophet Muhammad ﷺ performed many physical miracles witnessed by his contemporaries numbering in hundreds. The miracle reports have reached us by a reliable and strong method of transmission unmatched in world history. It is as if the miracles were performed in front of our eyes.  The meticulous method of transmission is what convinces us that Muhammad indeed performed these great miracles with divine aid and, thus, we can believe him when he said, ‘I am God’s Messenger.’ (Muslim) Muhammad’s ﷺ great miracles were witnessed by thousands of believers and skeptics, following which verses of the Quran were revealed mentioning the supernatural events.  The Quran made some miracles

[1] They are collected by Dr. Muhammad Wali-ullah al-Nadavi in his Master’s thesis entitled, ‘Nubuwwat al-Rasul,’ from al-Azhar University, Cairo, Egypt.

A pre-renovation picture of the Cheraman Juma Masjid, India’s oldest mosque dating back to 629 CE. The news of his accepting Islam reached Kerala where people accepted Islam. The people of Lakshadweep and the Moplas (Mapillais) from the Calicut province of Kerala are converts from those days.

“The Indian king gifted the Prophet ﷺ with a jar of ginger. The companions ate it piece by piece. I took a bite as well.”[2] The king was thus considered a ‘companion’ – a term used for a person who met the Prophet ﷺ and died as a Muslim – his name registered in the mega-compendiums chronicling the Prophet’s ﷺ companions.

[2] Mustadrik’ vol 4, p. 150.  Hakim comments, ‘I have not memorized any other report stating the Prophet ate ginger.’

Night Journey and Ascent to Heaven

A few months before the migration from Mecca to Medina, God took Muhammad ﷺ in one night from the Grand Mosque in Mecca to al-Aqsa Mosque in Jerusalem, a month’s journey of 1230 Km for a caravan. From Jerusalem, he ascended to the heavens, passing the boundaries of the physical universe to be in divine presence, meet God, and witness the Great Signs (al-Ayat ul-Kubra). His truth became apparent in two ways.  First, ‘the Prophet ﷺ described the caravans he had overtaken on the way home and said where they were and about when they might be expected to arrive in Mecca; and each arrived as predicted, and the details were as he had described.’[1] Second, he was never known to have been to Jerusalem, yet he described al-Aqsa Mosque to skeptics like an eye-witness.[2]

The mystical journey is mentioned in the Quran:

“Exalted is He who took His Servant (Prophet Muhammad ﷺ)by night from al-Masjid al-Haram to al-Masjid al-Aqsa, whose surroundings We have blessed, to show him of Our signs. Indeed, He is the Hearing, the Seeing.”

“So will you dispute with him over what he saw? And he certainly saw him in another descent at the Lote Tree of the Utmost Boundary – near it is the Garden of Refuge (Paradise) – when there covered the Lote Tree that which covered (it). The sight (of the Prophet) did not swerve, nor did it transgress (its limit). He certainly saw of the greatest signs of his Lord.”

The event is also confirmed through eye-witness testimony transmitted through the ages with an unbroken chain of reliable scholars.

Entrance of Al-Aqsa Mosque from where Muhammad ﷺ ascended the heavens. Picture courtesy of Thekra A. Sabri. 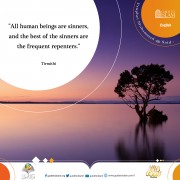 All human beings are sinners