Brethren in faith! Fear Allâh and do not incline to this world and its adornments. For this world is a temporary abode in which both righteous and sinful have their sustenance. The Hereafter is a true appointed time in which the Lord, Who is Omnipotent, shall judge between truth and falsehood.

Fellow Muslims! In this time of despair and hardship, a time in which values and concepts have been turned upside down, a time in which the powerful suppresses the weak and the rich the poor, a time that civilizations clash, the Muslims are seriously in need of affirming their civilization that is based on noble concepts. It is through these noble concepts that the Ummahs injuries can be healed.

The world communities have never been in a greater need to realize the defects that are in their civilizations as they are today. They need to know the defects of their systems of life. It is time for them to ask themselves the causes of their problems and the misery, which their civilizations have caused. They need to know the causes of widespread distress and anxiety that have overwhelmed their lives.

These are just some of the questions whose answer is provided by the Glorious Qurân. Allâh says,

Dear brother! If you reflect on the life history of the Messenger of Allâh, you will find it full of noble qualities in concept and practice. This is why the civilization of his religion is the only civilization that brought happiness to the world.

Âishah narrated that she asked the Prophet, Have you encountered a day harder than the day (of the battle) of Uhud?” The Prophet replied,

But whosoever turns away from My Reminder (i.e. neither believes in this Qurân nor acts on its teachings.) verily, for him is a life of hardship, and We shall raise him up blind on the Day of Resurrection. He will say: “O my Lord! Why have you raised me up blind, while I had sight (before).” (Allâh) will say: “Like this: Our signs came unto you, but you disregarded them (i.e. you left them, did not think deeply in them, and you turned away from them), and so this Day, you will be neglected (in the Hell-fire, away from Allâh’s Mercy).

 “Your tribes have troubled me a lot, and the worse trouble was the trouble on the day of ‘Aqaba when I presented myself to Ibn ‘Abd-Yalail bin ‘Abd-Kulal and he did not respond to my demand. So I departed, overwhelmed with excessive sorrow, and proceeded on, and could not relax till I found myself at Qarnath-Tha-alib where I lifted my head towards the sky to see a cloud shading me unexpectedly. I looked up and saw Gabriel in it. He called me saying, ‘Allah has heard your people’s saying to you, and what they have replied back to you, Allah has sent the Angel of the Mountains to you so that you may order him to do whatever you wish to these people.’ The Angel of the Mountains called and greeted me, and then said, “O Muhammad! Order what you wish. If you like, I will let Al-Akh-Shabain (i.e. two mountains) fall on them.” The Prophet said, “No but I hope that Allah will let them beget children who will worship Allah Alone, and will worship none besides Him.

When the people of Makkah made things difficult for him, persecuted him and his companions and injured his face, he could still be heard saying while wiping blood off his face, O Allâh! Forgive my people for they know not what they are doing.

The Prophet also brought the law of Islâm based on the principle of compassion. Allâh says,

And We have sent you (O Muhammad (peace be upon him)) not but as a mercy for all the worlds.

The Prophet would feel seriously hurt by whatever was harmful to his nation. He was never given an option to choose between two things except that he chose the easier as long as it was not forbidden. On many occasions he had said, Had I not found it hard for my followers or the people, I would have ordered so and so or I would have done so and so.Sometimes, he would want to prolong prayer and yet would shorten it when he heard the crying of a baby because he understood how upset his mother would be.

Muhammad (peace be upon him) is the Messenger of Allâh. And those who are with him are severe against disbelievers, and merciful among themselves.

 We were with the Prophet when one of his daughters sent (a messenger) to the him requesting him to come as her child was dying (or was gasping), but the Prophet returned the messenger and told him to convey his greeting to her and say: “Whatever Allah takes is for Him and whatever He gives, is for Him, and everything with Him has a limited fixed term (in this world) and so she should be patient and hope for Allah’s reward.” She again sent for him, swearing that he should come. The Prophet got up, and so did Sad bin ‘Ubada, Muadh bin Jabal, Ubai bin Ka’b, Zaid bin Thabit and some other men. The child was brought to Allah’s Apostle while his breath was disturbed in his chest (the sub-narrator thinks that Usama added:) as if it was a leather water-skin. On that the eyes of the Prophet started shedding tears. Sad said, “O Allah’s Apostle! What is this?” He replied, “It is mercy which Allah has lodged in the hearts of His slaves, and Allah is merciful only to those of His slaves who are merciful (to others).

Compassion breeds love and affection among people. Compassion is a delight of the heart and the way to Paradise. The Messenger of Allâh said,

 People of Paradise are three: (1) a leader who is generous, spends in charity and is guided to the right course; (2) a man who is compassionate, kind to every relative and every Muslim and (3) a poor person who is virtuous and has dependants.

Compassion softens the heart and leads man to be kind to even animals and birds. Abdullâh bin Masûd said,

Abdullâh bin Jafar narrated that the Messenger of Allâh entered the compound of an Ansârî man. And there here was a camel there. When the camel saw the Prophet, it longed for him, groaned and shed tears. The Messenger of Allâh approached it and wiped off its tears and it became quiet. He then said,

This is the Prophets reaction to the maltreatment of animals. Imagine how he would have reacted to a person who harmed humans, usurped the rights of the poor and did not treat children and old people with compassion. The Prophet said,

As for compassion that Islâm shows in the area legislations, that is a very long topic. All aspects of Islamic law are rather compassionate in their goals, means and applications.
Fellow Muslims! This is the mercy with which the Messenger of Allâh was sent. Our religion is that of compassion in times of war and peace. It is a religion of kindness towards enemies and friends, animals and birds. It is a religion of compassion in worship, cooperation and judgment and in all aspects of its law.

Words are not enough to describe how compassionate the Prophet was. Compare this to the so-called civilizations that are being claimed and that are in the real sense devoid of compassion and justice. Compare it to civilizations that do not, in victory, respect any pact of kinship or covenant of protection with a believer and that strive through the land to cause corruption therein and destroy crops and animals. And Allâh does not like corruption.

The Prophet found excuse for his people though they wanted to kill him. He was compassionate to them though they were fighting him. He wanted guidance and happiness for them. In our age on the contrary, the so-called leaders of modern civilization, who have no regard for compassion, claim to be compassionate. They find excuses for aggression and concoct lies to justify wars, killings, destruction and corruption.

It is therefore an act of compassion to rein in these people. And to be severe with them is part of the mercy that Islâm spreads.

Brethren in faith! Man has not excelled above other creatures by his mere physical size or strength. There are other creatures that are greater than him in power and size. He only excelled by his heart, soul, intelligence and feelings. It is not a matter of pride that man should be stern and severe, but real pride lies in excellent characters and sublime dispositions. This is shown through qualities like gentleness, compassion, graciousness and kindness. Allâh says,

And when it is said to them: “Make not mischief on the earth,” they say: “We are only peace-makers.” Verily! They are the ones who make mischief, but they perceive not.

Brethren in Islâm! Emulate the pure characters of your Prophet and hold fast onto the lofty principles of your religion.

Fellow Muslims! Compassion is a sign of humility. It also removes arrogance. Compassion means doing good to all, assisting the needy and being kind to the kith and kin. It also entails showing sympathy for the weak, the sick, the disabled and the orphans by making them happy. Compassion entails helping the wronged and reining in the devilish people. Compassion means feeling concerned about the affairs of fellow Muslims, sharing their pains and aspirations and coming to their aid. It also entails enjoining good, forbidding evil, and teaching the Muslims the goals of being compassionate. The Messenger of Allâh said,

And by the Mercy of Allâh, you dealt with them gently. And had you been severe and harsh-hearted, they would have broken away from about you; so pass over (their faults), and ask (Allâh’s) Forgiveness for them; and consult them in the affairs. 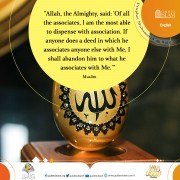 Warning against Shirk (associating others with Allah Almighty) 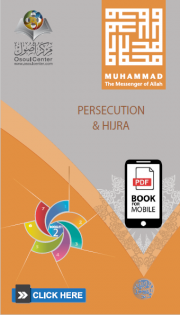