In the glossary of The Noble Quran[1]  the term Zakat is defined as follows, “A certain fixed proportion of the wealth and of every property liable to Zakat of a Muslim to be paid yearly for the benefit of the poor in the Muslim community.  The payment of Zakat is obligatory as it is one of the five pillars of Islam.  Zakat is the major economic means for establishing social justice and leading the Muslim society to prosperity and security”.

Thus we can see that Zakat is not a tax levied by a government nor is it a voluntary contribution to a charity.  It is a command enjoined upon the Muslims by God and as such it is a form of worship.  In fact it is worship of such a high and commendable standard that in the Quran it is frequently coupled with prayer.  Prayer is an act of worship through words and action while Zakat is an act of worship involving wealth.

“Lo! Those who believe and do good deeds and establish salat and pay zakat, their reward is with their Sustainer; and no fear shall come upon them, nor shall they grieve.” (Quran 2:277)

“These are verses of the Book full of wisdom, a guide and mercy to the doers of good -those who establish salat and pay zakat and have the assurance of the Hereafter.” (Quran 31:4)

Zakat, one of the five pillars of Islam, thus one of the basic foundations of the religion, is assessed once per year and is obligated upon those Muslims, men and women, who possess means enough to distribute a certain calculated percentage to the poor and needy.  As with many words used by God in the Quran, the word Zakat has many layers of meaning.  It can be translated to obligatory charity, alms, or tithe; however it combines these meanings with a deeper richer meaning of purity.

Giving Zakat purifies the heart of the one who gives from selfishness and greed for wealth, and develops in him sympathy for the poor and needy.  For those who receive the Zakat, it purifies the heart from envy and hatred of the rich and prosperous, and fosters a sense of good will between brothers.  Zakat has a deep spiritual significance as well as an economic objective.

Muslims believe God is the true Owner of all things and we, human beings, are merely trustees.  Wealth should be produced, distributed, acquired and spent in a way which is pleasing to God.  Every Muslim considers his condition in this world as a test from God.  Those with wealth have the obligation to be generous and charitable, those without have the obligation to be patient, to work to improve their situation, and to be free of envy.  God emphasises that it is not a person’s wealth but his piety, character and manners that determine his ultimate place in the hereafter.

“He grants abundant sustenance, or gives it in scant measure, unto whomever He wills, for He knows full well all things.” (Quran 42:12)

He has raised some of you in ranks above others that He may try you in the gifts He has given you.” (Quran 6:165)

Zakat has both humanitarian and socio-political value.  It is designed by our Creator to redistribute wealth and encourage social responsibility.  When Zakat is collected and distributed correctly it minimises the needs of citizens to such an extent that there may be no poor or needy within the Muslim community.   It has been reported and documented that at certain times in Islamic history no person, of any religion, who lived in the Islamic Empire qualified to receive Zakat.  There was enough money and wealth circulating to ensure a fair standard of living for everybody.

So who does qualify to receive Zakat? God has ordained that the Zakat be distributed to certain categories of people.

“The alms are only for the poor, and the needy and those employed to collect the funds; and to attract the hearts of those who have been inclined towards Islam; and to free the captives; and for those in debt; and for those struggling for the cause of God, and for the wayfarer (a traveller who is cut off from everything); a duty imposed by God.” (Quran 9:60)

1.      The poor - those who can meet basic needs but have neither wealth or secure livelihood.

2.      The needy – the extremely poor who cannot meet even basic needs.

3.      Those persons who are appointed to collect Zakat; (regardless of personal wealth).

4.      Those who have recently converted or are considering converting to Islam.

5.      Zakat may be used to purchase the freedom of slaves.

8.      A traveller, who is stranded and in need of financial assistance.

If a person has enough wealth to be a contributor he is not able to be a recipient.  Zakat may be distributed directly to individuals, or it may be entrusted to an Islamic welfare organisation or association, to be distributed at their discretion to those who are deserving.

A contributor should not seek fame or praise for carrying out what is an Islamic duty.  In fact he should give the Zakat as covertly as possible so as not to become proud or arrogant, thus nullifying his good deed.  Under certain circumstances however, the disclosure of contributions may encourage others to be generous.

Islam is a religion that encourages generosity and Zakat is just one way of encouraging  this in our everyday lives.  One of the most important principles of Islam is that all things belong to God, wealth therefore is only for our benefit to use for our needs and to distribute.  In terms of the way we look at the world in the 21st century Zakat could be considered a permissible form of insurance.  One who pays or receives the Zakat in a permissible and honourable way will gain many benefits including God’s pleasure, forgiveness and blessings.  In the traditions of Prophet Muhammad we are reminded that giving charity stands in the way of calamity[2].

“The parable of those who spend their wealth in the way of God is that of a grain of corn.  It grows seven ears and each ear has hundred grains.  God increases manifold to whom He pleases.” (Quran 2:261)

The Third Pillar of Islam: zakat 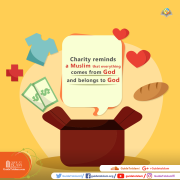