Presentation of the book: The Qur'anic Immortal Text Through the Ages

The book «The Quranic Immortal Text Through the Ages« took a new way in bringing out the Mus-hafs and the manuscript of the Qur'anic parts, based on what he called: the method of visual proof. This article introduces this book, the methodology of its author, and the most important conclusions and results.

Name of Book: The Qur'anic Immortal Text Through the Ages: A Comparative Study of the Surat al-Isra between nineteen Mus-hafs  from the middle of the first century to the fifth century.

Language of the book: double language (Arabic and English).

There are many ways and means used to bring out the Mus-hafs and the pieces of the Quran written by hand, in the past and present century, we see at the beginning of the twentieth century the Diplomatic version model, which depends on the idea of unloading the text of the manuscript to be published while preserving the spelling of the original words, added to this version the comments, explanatory notes and symbols agreed in advance to indicate the locations of the fall and increase, the marks of the verses and decorations, in addition to the other textual and artistic characteristics.

This type of publication does not include photographs of the entire manuscript, but only limited visual samples. An example of this method is bringing out a manuscript containing texts from the Quran and Christian sermons in Arabic by the orientalist Alphonse Mangana and Agnes Lewis Smith in 1914, entitled (papers of three ancient Qur'anic parts, most probably pre-Ottoman, with a list of their textual differences "(Cambridge University Press 1914, reprinted in 2014).

One of the disadvantages of this method is that the researcher deals with abstract texts that can not be validated except by referring to the original manuscript and making comparisons himself, in practice it is not as useful as required. Here is another example that fills this gap, depending on the idea of taking the whole manuscript out in a color photograph, sometimes in original or miniaturized sizes, with the copying or texting inserted on the opposite page in a modern calligraphy to facilitate the reading of the old manuscript line, This is known as the Facsimile copy.

Some of the most important early Qur'anic texts produced in this way in the late 20th century are remnants of the oldest preserved manuscript in the British Library, number 2165, and Qur'anic sheets from the French National Library No. 328, both from the first century AH, by François Diroche and Sergio Noya Nozada, A series of research were issued from the Mus-hafs in the Hijazi style.

As for the book we are presenting today, its author, the late Professor Muhammad Mustafa Al-Adhami (1932-2017), followed a qualitatively new method, relying on what he called the method of visual proof, which he defines as "establishing evidence of the validity of the Qur'anic text without resorting to words" (P. 1).

The book includes two parts: the First: is a preface. The second: paintings of Surat Al Isra. It is the essence of this book, which the author wanted to be a visual catalog of the Surat Al-Isra in 18 (18) manuscripts written from the first century AH up to the Quran printed in the fifteenth century AH.

In the introductory chapter, the author presents a summary of his previous research in the science of Hadith (study, collection and investigation), and then his change to the studies of the Holy Quran and his manuscripts; it was the beginning of the idea of preparing the successive optical catalog of Surat al-Isra after he had been acquainted with a number of diplomatic publications on the manuscripts of the Bible with its two testaments: the old and the new. Al-Adhami says: "We did not see the original manuscript or the grace of the quill as it made its way down the path of ink on the plank." For this purpose, it was crystallized In his mind the idea of collecting the Holy Qur'an manuscripts starting in 2000, and chose Al-Isra as a model because it is located in the center of the Quran (Surah number  17). It is known that the papers that may be lost from the Quran manuscripts are usually from the front or back, They are subjected to loss more than the others; It is true to reach the Sura in the largest number of the early Qur'anic passages.

The researcher relied on a number of manuscripts that differ in term of (form, calligraphy, and time), covering the period from the first century AH to the seventh century AH, through the Quran printed in the fifteenth century AH; The Mus-haf of the Prophetic City issued by the King Fahd Complex, which is one of the most famous editions of the Quran in the Islamic world and the most widespread today.

This is a clarification of the Qur'anic copies on which he depended [see figure 1]:

From Britain, he chose to work on the oldest preserved manuscript of the British Library number 2165 (we mentioned in the preface), which dates back to the first century AH, in 121 pages, written in Hijazi or italic script. From Uzbekistan, he relied on a copy published in 1905 for the "Samarqand Qur'an" (attributed to the Caliph Uthman ibn Affan), which is written in Kufic script, which is devoid of points and Tashkeel;  353 pages  remaining. From Turkey, he chose six copies of the Quran: the first is the manuscript attributed to Uthman ibn Affan at the Tubab Qabi Palace, which is a complete manuscript with only two papers missing and five other Mus-hafs of the Sulaymaniyah library.

From Sana'a, he used a collection of Qur'anic texts preserved in the Manuscript House, which cover various parts of the Surat Al Isra.

From Tunisia, he used two Mus-Hafs kept at the Museum of Islamic Art in Raqqada, next to the Qairawan Mosque, dating to the 3rd or 4th century AH.

From Saudi Arabia, used a Mus-Haf that belongs to the second or the third century AH is preserved in the library of King Fahd in Riyadh.

There were two more Mushafs available for the researcher but he did not use them in the visual comparison; the first is from the Tübingen University Library no. (Ma VI 165) and the second is from the Berlin State Library no. (Wetzstein II 1913); both from the first and second centuries AH .

Al-Adhami says: "These seventeen manuscripts were classified under the framework of the collate. The meaning of that sentence is the annexation to facilitate the tracking of similarities and differences. By linging up the words side by side, the reader can distinguish each word, As transmitted through the centuries in a visual way so as to deal easily with the details and the characteristics of the evolution of the methodological repetition echoed through time »(p. 5).

The most significant of these alphabets, as we have seen, concerns the phenomenon of deleting or proving the letter alif: (For example: ql and qal).

Of course, the Mus-haf is a assistant means of memorizing the Quran, it is assumed that - in an environment based on an oral tradition to deliver the text of the Quran - you know when to read the word by proving the alif and when you read the word without it, although it is written in one drawing.

It goes without saying that the errors in the transcripts can possibly occur in any text written by the hand of the human, the Quranic manuscripts are not excluded. However, the related transcription errors are very few because of the nature of the sacred text. The faithful copyist is meticulous in writing out of seeking the reward of Allah. Therefore, the number of transcript errors in the manuscripts studied by the scholar of Surat al-Isra does not exceed 0.007%, which is of no value. Among these errors is the writing of the "Majsid" instead of the "Masjid" [Al-Isra: 1] in the Mus-haf of Samarkand, and the "Salin" instead of "Salihin" [Al-Isra: 25]. in Mus-haf tub Qabi.

The idea of this visual catalog is worthy of adoption and use, and we hope to create future Qur'anic collections on the basis of the idea presented by Al-Adhami in this work, with the selection of models of different Qur'anic verses and various temporal and spatial manuscripts covering the first century AH and ending with the late Quranic period of the Ottoman era.

Figure 1: A diagram of the manuscripts of the Mus-hafs used by the researcher in directing the sequential visual presentation of Surat al-Isra, which in its entirety covers the period from the first century AH to the seventh century AH. See: Muhammad Mustafa Al-Adhami, The Noble Qur'anic Text through the Ages, pp. 19- 23.

Figure 2: A sequential visual presentation of the Surat Al-Isra (verse 1 here), beginning with the entire verse as it appears in the Mus-haf of the Prophet's City - once with full tashkeel and once devoid of tashkeel and points - and then showing the same verses extracted from the Qur'anic manuscripts beginning from the first century AH onwards. Source: Mustafa Al-Adhami, " The Quranic Immortal Text Through the Ages ", Section II, p.

Figure 3: The proportion of matching the words of Surat Al-Isra in the Mus-haf  manuscript used in Al-Adhami study compared to the printed Madinah Al-Munawwarah. Source: « The Quranic Immortal Text Through the Ages », p. 48. 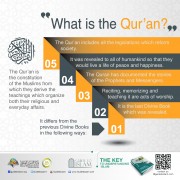 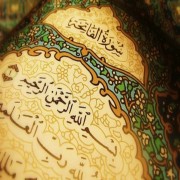 Who Arranged the verses and chapters of the Quran?

An Arrangement Pointing Out the Author