Prophet Muhammad – Man for all seasons

In this article we are going to look at Prophet Muhammad himself and discuss why he can be referred to as a man for all seasons and one who can easily be described as the man of the century, century after century.

The term, a man for all seasons, was made famous by 20th century playwright Robert Bolt’s portrayal of Sir Thomas More as the definitive man of conscience, one who stands firm and true to himself and his beliefs under extraordinary pressure.

It is a title Bolt borrowed from a contemporary of More’s who wrote about him in 1520. It is an idiom that describes a person who is very successful in many different activities. Prophet Muhammad is that person.

Prophet Muhammad fits the description of a person who remains true to his beliefs perfectly. His most important mission was to convey the message of Islam; that God is One without offspring or partners and He alone deserves worship.

{O Messenger, announce that which has been revealed to you from your Lord, and if you do not, then you have not conveyed His message….}

However spreading the message made Prophet Muhammad a social outcast, it stripped him of his wealth and changed his life from one of ease to one fraught with danger. His life was threatened on more than one occasion and his family, friends and followers were ridiculed, mocked and physically beaten. Still, he stood firm without compromising either himself or his message.

W. Montgomery Watt[1] defined a prophet as, “one who proclaims ideas central to the human experience”. The mark of a great prophet, it is said, is that his ideas are profoundly attractive to those to whom they are addressed.

Prophet Muhammad took his covenant with God to spread the message of Islam, very seriously, he communicated the text of the Quran, his understanding of the revelation formed the basis of all the Islamic sciences.

He taught his followers in a way that created a means for the continued spread of Islam. Prophet Muhammad was by any standard an excellent religious leader.

Prophet Muhammad was Islam’s first great general and arguably the leader of the world’s first insurgency. In the space of a decade he fought eight major battles, led eighteen raids, and another thirty-eight military actions were carried out under his orders and strategic direction.

According to Richard A. Gabriel, a military historian and adjunct professor at the Royal Military College of Canada, Prophet Muhammad can be described as “a great field general and tactician, (he was also) a military theorist, organizational reformer, strategic thinker, operational-level combat commander, political-military leader, heroic soldier, and revolutionary”. [2]

Prophet Muhammad used the Quran to found a nation based on the Islamic concepts of justice and tolerance.

In the small city state that became known as Madinah Prophet Muhammad set in place policies and institutions that enabled a small community to grow into an outstanding state.

Prophet Muhammad translated God’s commandments into state law and the best example of this is the constitution of Madinah. The constitution set the standards for society, and upheld the rules and regulations by which the state would function, both judicially and legislatively.

Also included were the conditions under which war could be declared and the duties of a citizen to the state were outlined. These two rules specifically were new to the people of Madinah, and later the Islamic Empire. The constitution bound people together by religious commonality, not kinship or tribal relations.

In the pre Islamic period diplomacy in the Arabian Peninsula was very limited and devoid of ethical considerations. Prophet Muhammad was able to influence its growth and shape by adding ethical and moral concerns. He included in his diplomacy peace treaties, issues relating to prisoners of war, international cooperation and solidarity between nations.

Prophet Muhammad developed a sophisticated intelligence network through which he was able to keep abreast of affairs in the region. This enabled him to establish contact with other nations by sending envoys and diplomatic communications. Prophet Muhammad sent letters to Emperor Heraclius of Roman Empire, Emperor Khasru of Persian Empire, Egyptian ruler Mukau Keus, Ethiopian Emperor Najjashi and others inviting them to embrace Islam and rule their respective countries with justice. Where possible he negotiated treaties and resolutions that were beneficial to the fledgling Muslim nation.

Now days these would all be called high powered roles. Prophet Muhammad was a religious leader, a law giver, a nation builder, a mighty military general, a diplomat and a statesman. His behavior when taking on each of these roles was what we, so far away in time, would call best practice. He was also a family man. He was a husband, a father and a grandfather. Prophet Muhammad’s behavior within his family relationships is a wonderful example for any man in any time or place to emulate.

Prophet Muhammad was an attentive and loving husband who did his share of household duties including tidying up and mending clothes. He never once raised his voice or raised his hand to any of his wives even when they sorely tested his patience.

He raised four daughters in a culture and place where baby girls were often buried alive and sometimes considered a curse. Prophet Muhammad was a doting grandfather sometimes even allowing his grandsons to climb all over him while he was in congregational prayer. Prophet Muhammad advised his followers to be good to their families. He said:

“The best of you is he who is best to his family and I am the best among you to my family”.[3]

Prophet Muhammad can rightly be considered a man for all seasons. He was successful in any role he stepped into from his lonely and lowly position as a shepherd to the leader of a great empire. His behavior was in all situations worth emulating. His greatest success however was a Prophet and Messenger of God. 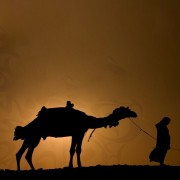 Who Is the Prophet Muhammad ? 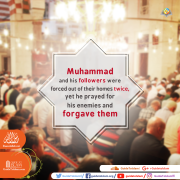