Salaah (praying) is one of the main pillars of this religion, it is the link between the servant and his lord. the prophet, peace be upon him, said about Salaah: “the first thing of your religion that you will lose is trusteeship, and the last thing that you will lose of your religion is Salaah.” the scholars have unanimously agreed that the one who neglects Salaah is kaafir if he does it deliberately, denying that it is obligatory and he is gone beyond the pale of Islam.

He is considered to be a murtadd (apostate) who is to be given three days to repent – if he does not, he is to be executed for his apostasy, as unanimously agreed by scholars. as for the one who does not deny that it is obligatory, but he neglects it because of laziness, for example, then he is guilty of a major sin (kabeerah), but he is not considered to be beyond the pale of Islam. the proof is the saying of the most high (Allah s.w.t),

“indeed, Allah does not forgive association with him, but he forgives what is less than that for whom he wills. and he who associates others with Allah has certainly fabricated a tremendous sin.”

'Itban Bin Malik (may Allah be pleased with him) reported that the prophet, peace be upon him said:

“…do you not know that he said: ‘la ilaha illallah (there is no deity worthy of worship except Allah),’ seeking his pleasure. Allah has made the fire of hell unlawful for him who affirms that none has the right to be worshiped but Allah."

Some scholars like the Hanabilah and Shafayah schools of jurisprudence said that if a person denies that prayer is obligatory or because of laziness, he is a kaafir.

The prophet (peace be upon him) said: “The difference between us and them is Salaah. Whoever neglects it is a kaafir.”

“(nothing stands) between a man and kufr and shirk, except prayer: (whoever neglects it becomes a kaafir and a Mushrik).”

(Reported by Imaam Muslim in his Saheeh, with other similar Ahaadeeth).

So, it is obligatory on the Muslim to maintain the performance of Salaah on time, and should not abandon this obligation because of anything because abandoning prayers is a major sin (kabeerah), or even worse, i.e. apostasy.

Scholar Ibn Taymayah said: the one who deliberately abandons Salaah, never prays and dies on this state is not a Muslim, but as for those who pray sometimes and sometimes not, they do not maintain it and they are under the penalty.

The summary is that the one who abandons Salaah deliberately, denying that it is obligatory, is kaafir and he has gone beyond the pale of Islam. as for the one who prays sometimes and sometimes not because of being neglectful and lazy, yet he believes it is obligatory, then he is a disobedient, committing a major sin, and he has to repent to Allah and maintain Salaah on time, at mosques, and never to delay it again.

The prophet, peace be upon him, said:

so the Muslim should be cautious not to abandon or neglect Salaah.

Praying.... A Special Kind of Meeting 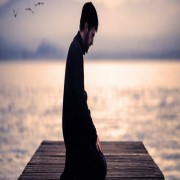