Most Christians imagine that Muslims dislike Jesus, or at best are neutral towards him, or view him in the same way as Christians view Muhammad (peace be upon him). The truth is totally different. Here are ten facts about the status Islam gives to Jesus, which you might have not heard before.

1. As told in the Qur’an, the story of Jesus starts with his grandmother, ‘Imran’s wife, who pledged her pregnancy to God’s service. This pledge was accordingly fulfilled when she gave birth to Mary, Jesus’s mother, who was the best woman of her age, and one of the best of God’s creation. The Qur’an says:

‘[Imran’s wife said: “My Lord, I vow to you that which is in my womb, to be devoted to Your service. Accept it from me. You alone are the One Who hears all and knows all.” When she had given birth she said: “My Lord, I have given birth to a female.” – God well knew to what she would give birth. – “The male is not like the female. I have named her Mary and I seek Your protection for her and her offspring against Satan, the accursed.” Her Lord graciously accepted her. He made her grow up a goodly child, and placed her in the care of Zachariah. Whenever Zachariah visited her in the sanctuary he found her provided with food. He would say: “Mary, where has this come to you from?” She would answer: “It is from God. God gives sustenance to whom He wills, beyond all reckoning.’

2. Jesus’ mother, Mary, is mentioned 31 times in the Qur’an, and she is the only woman mentioned by name in the Qur’an. Indeed the Qur’an does not refer to any woman, including Muslim women, more times than Mary. She is not mentioned as many times in the New Testament either. What is more is that the surah, or chapter, 19 in the Qur’an is named after her, and you can easily read this surah on the internet. It is only seven pages.

3. Muslims believe that Jesus is not merely a prophet, but also one of the top five of God’s messengers to mankind. These five are given the description of being ‘Messengers of firm resolve’. A Muslim is not a true believer unless he believes that Jesus (peace be upon him) was God’s servant, messenger and word which He gave to Mary and a soul from Him.

4. Muslims believe in the virgin birth of Jesus. He had no father, and his birth was a miracle to show God’s power and the special status of Jesus. It was also a test and honour to his mother who endured people’s criticism. The Qur’an quotes her words: She said:

‘How shall I have a child when no man has ever touched me and I have never been a loose woman?’

5. Jesus spoke in infancy and this was his first miracle, and evidence of his prophethood. The Qur’an records what he said in infancy to defend his mother:

‘She pointed to the child. They said: ‘How can we talk to a babe in the cradle?’ Whereupon he said: ‘I am a servant of God. He has vouchsafed to me revelations and made me a prophet, and made me blessed wherever I may be. He has enjoined on me prayer and charity as long as I live. He has made me kind to my mother, not haughty or bereft of grace. Peace was on me on the day when I was born, and [will be on me] on the day of my death and on the day when I shall be raised to life again.’

6. According to Islam, Jesus’ mission is very clear: to call on people to worship God alone, associating no partners with Him: ‘Nothing did I tell them beyond what You bade me [to say]: “Worship God, who is my Lord and your Lord.” I was witness to what they did as long as I lived in their midst. Then when You took me to Yourself, You have been watching over them. You are indeed a witness to all things. (117) He also announced the forthcoming of God’s last messenger: ‘Jesus, the son of Mary, said:

“Children of Israel! I am God’s messenger to you, [sent] to confirm the Torah revealed before me, and to give news of a messenger that will come after me, whose name shall be Ahmad.” But when he came to them with all evidence of the truth, they said: “This is plain sorcery”.’

7. Muslims believe in the different miracles Jesus was given. He brought the dead back to life. (Yes, you heard that right). And he fashioned from clay the figure of a bird and breathed into it, and it became a living bird. (Yes, you heard this right too). And he cured people who were sick with different illnesses. He did all this by God’s will.

8. When Muslims mention Jesus, they say (peace be upon him), in the same way as they do after mentioning the name of Prophet Muhammad or Prophet Abraham or any other prophet. They do so to pay their respect to God’s prophets.

9. According to Islam, Jesus (peace be upon him) was not crucified. God raised him to Himself. This is the truth God has told us in the Qur’an:

‘For their disbelief and the monstrous calumny they utter against Mary, and their boast: ‘We have killed the Christ Jesus, son of Mary, God’s Messenger.’ They did not kill him, and neither did they crucify him, but it only seemed to them [as if it had been] so. Those who hold conflicting views about him are indeed confused, having no real knowledge about it, and following mere conjecture. For, of a certainty, they did not kill him. No!  God raised him up to Himself. God is indeed almighty, wise.

10. This last fact may come as a surprise: Muslims believe that Jesus will return at the end of time and he will kill the Impostor. He will spread justice and goodness among people. Everyone will have plenty, so that people would look at money and not take it. He will break the crucifix declaring the fallacy of the claim that the Jews crucified him. He will kill the pig in order to purge his message of distortion.

These ten facts may come as a surprise, but you can easily find what the Qur’an and Prophet Muhammad say about Jesus, which is what Muslims believe. I promise that you will find even more surprising facts.

Muslims love and believe in Jesus as a prophet 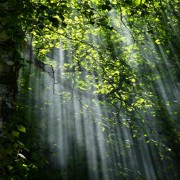 Jesus: A Prophet of God II