The Help of Allah And His Victory

“Allah – the Mighty and Majestic – said:

“Indeed, Allah will help those who help His cause. Indeed Allah is all-Powerful, all-Mighty.”

“Allah – the Mighty and Majestic – explains in this noble Verse that He has promised to help and give victory to those who help Him. And it is known that the help and victory of Allah comes by following what He has prescribed, obeying His command, avoiding His prohibitions, helping His Messengers,and their followers, aiding His Religion and fighting against His enemies and overpowering them; until the word of Allah is made uppermost and the word of His enemies is debased. Then Allah – the Most High – explains the characteristics of those whom He has promised would receive His help and victory, distinguishing them from others. So Allah said about those to whom He promised He would aid and grant victory to – for indeed He is the One to aid and grant victory:

“Those who, if We establish them in the earth, establish the Prayer, give the zakaah, enjoin the good and forbid the evil.”

So this noble Verse points to the fact that whoever helps Allah, then Allah will help and aid them. This is clearly explained in Allah – the Most High’s – sayings:

“O you who Believe. If you help Allah, Allah will help you; and establish your feet firmly. But those who disbelieve, for them is destruction and Allah will make their deeds vain.”

“Allah has Decreed: It is I and My Messenger who will prevail.”

“Allah has promised to those amongst you who have Iman (certainty of belief) and do righteous actions), that He will grant you the khilaafah (succession) in the land.”

“Those who, if We establish them in the earth, establish the Prayer, give the Zakaah, enjoin the good and forbid the evil.”

In this is a proof that there is no promise from Allah of His help, except by establishing the Salaah (Prayer), paying the Zakaah, enjoining what is good and forbidding what is evil. So it is these whom Allah will establish upon the earth, and through whom He will strengthen His Word. However, those who do not establish the Salaah (Prayer), nor pay the Zakaah, nor enjoin the good, nor forbid the evil, then there is no promise from Allah that He will aid and grant them victory. Such people are not from His party, nor are they His friends; those who have the promise of His help and victory. Rather, such people are from the party of Shaytaan and his friends. So if they were to expect the help of Allah and the fulfillment of His promise upon them, then their example would be like that of a hired worker who refuses to the do the job that he was hired for, yet he expects to be rewarded. So whoever is like this, then he has no intellect!”

God's court will not discriminate 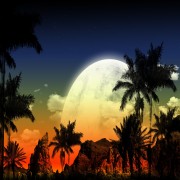