What is the Hijab?

The word Hijab comes from the Arabic root word ‘Hajaba’, which means to conceal or cover. In an Islamic context, Hijab refers to the dress code required for Muslim females who have reached puberty. Hijab is the requirement of covering or veiling the entire body with the exception of the face and hands. Some also choose to cover their face and hands and this is referred to as Burqa or Niqab. The Hijab is not required in situations where there are only females and certain male relatives present. However, hijab is not just about outer appearances; it is also about noble speech, modesty, and dignified conduct. These righteous manners are also required of men. Muslim males are also required to dress in loose and unrevealing clothing in order to maintain their modesty and dignity.

The Hijab is Obedience

Although there are many benefits of Hijab, it is first and foremost a commandment from God. Therefore, wearing it is an act of faith and obedience to The Creator, as mentioned in the Quran:

“Tell the believing women to draw their outer garments around them (when they go out or are among men).”

God, the All-Wise, knows what is best for His creation, and has therefore provided guidance in order to benefit humankind. The wearing of hijab, just like any other act of obedience to The Creator, brings one closer to their Lord and helps bring a sense of satisfaction and contentment to the person wearing it. The Hijab in no way suggests that women are inferior to men.

The Hijab is Modesty

Islam promotes modesty and decency and seeks to minimise immorality within society. The Hijab, amongst other things, helps attain this goal.

Note that in the above verses, it is men who are addressed first in regards to lowering their gaze and guarding their modesty. This counters the claim that all responsibility for such modesty is shouldered by women.

While Islam discourages public displays of immodest dress and sexual behavior, being a practical religion, Islam encourages love, affection and intimacy between married couples in private.

The Hijab is Protection

The wisdom behind the Hijab is to minimise sexual enticement and moral degradation in society as much as possible for both men and women. The Hijab helps protect men, women and society by creating stability in both families and communities in a number of ways:

The Hijab is Dignity

The Hijab promotes a woman’s femininity rather than suppressing it, and grants women dignity and self-respect for who they are, as opposed to being judged by superficial standards, such as appearance. This grants women the power to shape their own dignity via more meaningful standards, such as righteousness, knowledge and societal contribution, rather than having a consumer society dictate their worth through material means, such as how they look or how much money they earn. In the sight of God, men and women do not have to be identical in order to be equal, and this is reflected in the different roles and responsibilities which apply to each.

Nobel Peace Prize winner, Tawakkul Karman, ‘The mother of Yemen’s revolution,’ when asked about her Hijab by journalists and how it is not proportionate with her level of intellect and education, replied:

“Man in early times was almost naked, and as his intellect evolved he started wearing clothes. What I am today and what I’m wearing represents the highest level of thought and civilization that man has achieved, and is not regressive. It’s the removal of clothes again that is a regression back to the ancient times.”

The Hijab is Respect

In a number of societies today, many women are taught from early childhood that their worth is proportional to their attractiveness. They are compelled to follow unrealistic and demeaning standards of beauty in order to satisfy unreasonable peer pressure and community expectations. In such a superficial environment, where so much emphasis is placed on external beauty, the internal beauty of the individual counts for very little.

Islam however, teaches that a woman is to be respected according to her virtuous character and actions rather than by her looks or physical features, of which she has little or no control. She does not have to use her body and charms to gain recognition or acceptance in society, as the Hijab directs self-worth away from appearance and onto qualities such as piety, virtue, modesty and intellect – attributes which are more equally accessible to all.

Every woman who wears a hijab or burqa is a unique individual, and it is unfair and inaccurate to make a sweeping judgement about all such women based on one item of clothing they have in common.

The Hijab in the Bible

The Hijab is not something new. Muslim women follow the example of righteous women in the past such as Mary, the mother of Jesus. Some of the evidence from the bible includes the following two verses.

“And every woman who prays or prophesies with her head uncovered dishonors her head.” 1 Corinthians 11:3-6

“I also want women to dress modestly, with decency and propriety, not with braided hair or gold or pearls or expensive clothes, but with good deeds, appropriate for women who profess to worship God.” 1 Timothy 2:9-10

The Hijab is Confidence

The Hijab enables women to have confidence in themselves as human beings. It increases the self-esteem of women by allowing them to focus on what really matters in life. The obsession with physical appearance can have dangerous and unhealthy consequences, as some women go to harmful lengths in order to feel accepted by an increasingly demanding society. The Hijab helps prevent such mental and physical harms associated with a lack of confidence, by limiting self-consciousness based on appearance.

The Hijab is NOT…

What Muslim Women Say About the Hijab

“I wore it at the age of 17 and now regret not wearing it earlier.” Faten, 27, Melbourne

“Wearing Hijab represents my freedom, my choice, not my oppression by the wants of men and media.” Nusaybah, 45, Melbourne

“I like wearing the hijab because I’m doing it for the sake of Allah, and every time I think about that, it puts a smile on my face.” Aisha, 13, Melbourne

“It allows me to realise my goals by having a career and going to school without worrying about the prying eyes of men. It forces people not to judge me based on my appearance, but on my thoughts and character.” Ms. Flavia, 22, USA

“My body is my business, and I shouldn’t have to defend what I wear to anyone. It is part of my religion, and the fact that I choose to wear it does not make me any less human.” Ms. Yasmin, 21, Australiaconclusion 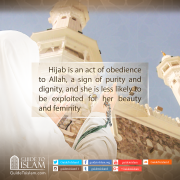 The Meaning of Muslim Hijab 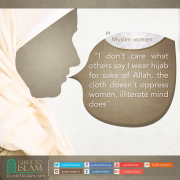