The Importance of Prayer (Salah)

·To realize the importance of performing the prayers.

· To understand the spiritual dimension of prayers.

·Salah - the Arabic word to denote a direct connection between the believer and Allah.  More specifically, in Islam it refers to the formal five daily prayers and is the most important form of worship.

· Mi’raaj - the ascension of Prophet Muhammad into the heavens.

The ritual prayer (salah[1]) is the heartbeat of Islamic worship, a living expression of Islam.  It keeps a Muslim in permanent contact with Allah.  The recitation of the Quran, the sacred scripture of Islam, is an inseparable element of the prayer.  In it, one finds the purest expression of the essential elements of Islam.  Being a ritual act of devotion to Allah, it has two faces: the legal prescription and the spiritual dimension.  We shall discuss the latter in this lesson.

The first duty on a person upon becoming Muslim is the performance of the prayers. The prayers are obligatory on every Muslim man and woman five times a day throughout their life once they declare Islam.  The prayer (salah) is the second pillar of Islam, after the two Testimonies.  Whether one is rich or poor, healthy or sick, traveling or resident, a Muslim must pray.[2]  Every Muslim should learn the rules and regulations of praying correctly and pray five times a day.  Learning and performing the prayer should be the first priority of every new Muslim.  If you are new to Islam, incorporating a new religious practice done in an unfamiliar language may feel strange and intimidating, but soon with patience and Allah’s help it will become part of your life.  Prayer to a Muslim is as important as breathing, and  it isn’t as difficult as it may seem!

The prayer revolves around three supreme realities in a Muslim’s life: Allah, His Prophet, and the community of believers.  Allah is constantly praised, glorified, thanked, and remembered in prayer (salah).  A Muslim turns himself inwardly and outwardly to Allah.  The method of the prayer is that of the Prophet in which he is mentioned as well.  Lastly, the prayer ties one to the community of the faithful, especially when performed in the mosque with a local congregation.

The prayer (salah) is considered the most important act of worship prescribed for human beings.  It is the backbone of religious observance of a Muslim. Without a spine, the human body would collapse. Similarly, without the prayer a person’s Islamic practice would fall apart.

The Prophet himself compared it to the spine

The head of all affairs is Islam, its spine is the prayer (salah)

Between a person and disbelief is discarding the prayer (salah).

What this means is that if a man stops to pray completely, he slides into disbelief.

There are quite a few other points which emphasize the importance of the prayer (salah), from them the following:

- The Prophet at his death bed advised the Muslims to pay attention to salah.[3]

- It was the first act of worship made compulsory on Muslims who were required to observe the prayer while in Mecca before migration to Medina.  Compulsory charity (Zakat[4]), fasting, and pilgrimage were made compulsory in Medina.

- The first matter we will be questioned about on the Day of Judgment is salah:

- Abraham asked his Lord to give him descendants who would abide by their prayers:

My Lord! Cause me and (some) of my offspring to remain constant in prayer.  And O our Lord!  Accept my supplication

The Quran is full of commands to pray to emphasize its importance.  The prayer has been divinely transmitted to us in two ways.  First, Allah Himself commanded Prophet Muhammad, may the mercy and blessings of Allah be upon him, when he ascended into the heavens in a journey known as the Mi’raaj (The Ascension).  The commandment for the prayer (salah) was not brought down by an angel to the Prophet, but the Prophet was taken up to the heavens, and Allah addressed him directly in its obligation.  Second, the great angel Gabriel descended to teach the Prophet the five prayers and their times. 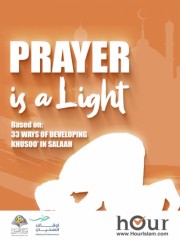 Prayer is the light 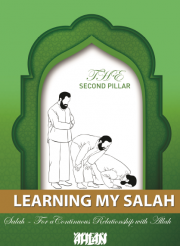