Loyalty, fulfilling obligations and returning trusts to their rightful owners are some of the characteristics of the Prophet, Peace Be upon Him. The importance of these characteristics is confirmed in the Qur'an as Almighty Allah says: “And do not come near the wealth of the orphan—unless intending to enhance it—until they attain maturity. Give full measure and weigh with justice. We never require of any soul more than what it can afford. Whenever you speak, maintain justice—even regarding a close relative. And fulfill your covenant with Allah. This is what He has commanded you, so perhaps you will be mindful.” (Al-An’am: 152)

The Prophet, Peace Be upon Him, is characterized by this noble quality which is obvious in how he worshipped the Lord, and how he dealt with his wives, friends or even his enemies.

He was loyal in how he dealt with his Lord, he was obedient to Allah and worshipped Him the best he could. He delivered the Message he was assigned to deliver by the Lord, he did that with honesty and loyalty. He clarified to the people the religion of Islam and guided the people to the straight path, according to Allah’s commands. Almighty Allah says: “˹We sent them˺ with clear proofs and divine Books. And We have sent down to you ˹O Prophet˺ the Reminder, so that you may explain to people what has been revealed for them, and perhaps they will reflect.” (An-Nahl: 44). One day Aisha, mother of the believers, asked him when she saw him praying Qiyyam till his feet became swollen, she asked him why he does so?! Why he exerts such efforts and worships Allah in that way, while Almighty Allah has forgiven his former and latter sins… He said to her: “Should not I be a thankful servant?!”

He was loyal to his wives, he remained loyal to Khadija, may Allah be pleased with her, and thankful for her great stands, her generosity, wisdom, and sacrifices. He never married someone else while she was alive, while it was very common in the Arabian Peninsula back then to have multiple wives. He kept mentioning her after her death, and remembered her with her good acts. He used to visit her relatives and be kind to her friends, he did all that out of loyalty for her, may Allah be pleased with her. One day an old lady came to visit him in Madinah, the Prophet hurried to welcome her with warmth, and hospitality. He grabbed his valuable outfit, and spread it for her so that she would sit on it. After she left, Aisha, may Allah be pleased with her asked him why he was that welcoming and generous with this lady, he said to her: “She used to visit us when Khadija was alive.”

He was loyal to his relatives, he never forgot that his uncle raised him from the age of eight, this is why he was keen to guide him till his uncle’s death, and kept asking Allah to forgive his uncle till it was prohibited to do so.”

He was loyal to all creatures; he used to walk each day from his room in the mosque to the pulpit where he led Muslims in prayer, the space between his room in the mosque till the pulpit was some steps. He loved those meters of the ground because they were a path to Allah, and to his most beloved act, praying. He loved those steps and declared that “between his pulpit and his house a garden in paradise.” [1]

Muhammad: Prophet Sent by God As A Mercy to the World 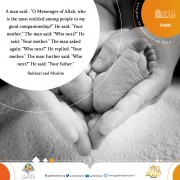 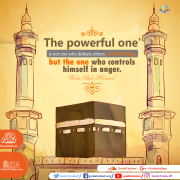