Scientific Miracles of the Quran

The “scientific miracles” of the Quran is a topic that many people are talking about nowadays, as the research in many fields continues.  The source for this is probably the fact that there are literally hundreds of verses of the Quran in which God points to different aspects of this creation and encourages humans to reflect and learn from what they are seeing.

Shortly after I became Muslim, I became aware of Maurice Bucaille’s The Bible, the Quran and Science.  For the sake of brevity, I wish to share with you the important conclusions that he reached:

The Quran follows on from the two Revelations that preceded it and is not only free from contradictions in its narrations, the sign of the various human manipulations to be found in the Gospels, but provides a quality all of its own for those who examine it objectively and in the light of science i.e. its complete agreement with modern scientific data.  What is more, statements are to be found in it (as has been shown) that are connected with science: and yet it is unthinkable that a man of Muhammad's time could have been the author of them.  Modern scientific knowledge therefore allows us to understand certain verses of the Quran which, until now, it has been impossible to interpret.

In view of the level of knowledge in Muhammad's day, it is inconceivable that many of the statements in the Quran which are connected with science could have been the work of a man.  It is, moreover, perfectly legitimate, not only to regard the Quran as the expression of a Revelation, but also to award it a very special place, on account of the guarantee of authenticity it provides and the presence in it of scientific statements which, when studied today, appear as a challenge to explanation in human terms.[1]

In his discussion of the Quran, Bucaille emphasizes three important points:

a)     First, there is nothing in the Quran that contradicts modern science;

b)     second, there is no mention of some of the false beliefs that people had at that time of the Prophet Muhammad, may the mercy and blessings of God be upon him, concerning the creation, the universe and science in general; and,

c)     three, there is no way that the Prophet Muhammad could have known at his time many of the facts alluded to in the Quran.

For the sake of brevity, though, it will be possible to discuss only one verse in some detail here demonstrating the “scientific miracles” of the Quran.[2]

Upon reading the Quran, one topic that catches many a reader’s eye is the discussion of the creation of the human within the womb of the mother.  God says in the Quran:

“We created man from an extract of clay. Then We made him as a drop in a place of settlement, firmly fixed. Then We made the drop into an alaqah (leech, suspended thing, and blood clot), then We made the alaqah into mudghah (chewed-like substance)…”

This brief passage is outstanding in its precise description of the actual process as well as its freedom from all of the incorrect theories and views that were prevalent at the time of Muhammad.  As noted in the translation, the Arabic word alaqah can imply leech, suspended thing or blood clot.  In reality, all of these terms are descriptive of the embryo.  In fact, in its earliest stage, the embryo not only actually physically looks like a leech[3] but it “obtains nourishment from the blood of the mother, similar to the leech, which feeds on the blood of others.”[4] Alaqah, again, can also mean, “suspended thing,” which is also true of the embryo in this stage as it sits hanging in the womb of the mother.[5]  Finally, alaqah can also mean blood clot.  Again, the relationship to the actual physical process is miraculous.  Ibrahim writes:

The verse states that the next stage is that of a mudghah or “chewed-like substance.”  This is also an amazingly accurate description of the next embryonic stage.  At this stage, the embryo develops somites at its back and these “somewhat resemble teeth marks in a chewed substance.”[7]

The kind of information described above has only been “discovered” and seen by humans since the development of powerful microscopes.  Ibrahim notes that Hamm and Leeuwenhoek were the first to observe human sperm cells, in 1677 due to the help of an improved microscope.[8]  This took place some 1000 years after the time of the Prophet Muhammad.

In fact, the details and the analysis of the Quranic verses related to embryology are so great that Keith Moore, Professor Emeritus of Anatomy and Cell Biology at the University of Toronto, has included them in a special edition of his textbook The Developing Human: Clinically Oriented Embryology.[9]  This is an interesting work that is comprised of Moore’s complete textbook with insertions describing some of the same topics from the point of view of the Quran and the sayings of the Prophet.  After discussing advanced topics in embryology—most of which are the result of research in the past few decades—this textbook would then have pages inserted describing what the Quran has stated concerning the same issues.  Can you imagine taking the best medical book from even just 200 years ago and doing something of this nature? It would be absurd and ludicrous as the material of the old textbook would be completely irrelevant.  However, they could do this with the Quran, a book that does not even claim to be a medical textbook.  Of course, it has a much stronger claim: it claims it is from God.

Commenting on the miraculous consistency between statements in the Quran and the historical development of Embryology, Dr. Moore stated in 1981, “It has been a great pleasure for me to help clarify statements in the Quran about human development.  It is clear to me that these statements must have come to Muhammad from God, because almost all of this knowledge was not discovered until many centuries later.  This proves to me that Muhammad must have been a messenger of God.”[10]

In fact, the Quran touches upon many sciences other than embryology, such as astronomy, physics, geography, geology, oceanography, biology, botany, zoology, medicine and physiology.[11] Thus, numerous other scientists from various fields have made similar conclusions concerning the Quran.[12]

How could it be that this illiterate man of some fourteen hundred years ago, the Prophet Muhammad, produced a book of this nature having so many scientific facts and details with perfect accuracy in it? Could it have been the case that this was all a coincidence and that the Prophet was an imposter? At least in my opinion, the answers to questions like these were very clear. Indeed, the claim that the Quran is not a revelation from God becomes more and more difficult to hold once one learns more about the Quran itself.

Incidentally, there are other historically related miraculous aspects of the Quran. For example, as opposed to the Bible, the Quran refers to the ruler at the time of Joseph as a “king” and never refers to him as a Pharaoh, although that term is used in the Bible in the story of Joseph, and the Quran uses that term in the story of Moses.  It seems, from the best of what can be determined now, that Joseph lived among the Semitic Hyksos kings of Egypt and that his ruler was indeed not a Pharaoh.[13]  The Quran also makes it clear that the body of the Pharaoh of the Exodus would be recovered and preserved.[14]  Now, it is considered that all of the Pharaohs of that time have actually been preserved as mummies, something the Prophet also could not have known at that time.  This has led two researchers to state:

If the Holy Quran was derived from the Bible [as some people falsely claim, then] those many Biblical errors would have passed into it. Why, for instance, would the Holy Quran describe the Israelites as a small nation when the Bible claims that they were 2-3 million, an enormously inflated number that no scholar would accept?... Why did the Holy Quran not go along the Biblical, and indeed logical belief that Pharaoh was swallowed by the sea, to state instead that Pharaoh’s “body” was rescued? And why would the Holy Quran say this about Pharaoh in particular but not about other people who were also destroyed by God?...[15]

Finally, Muslim scholars have noted that the particular miracle given to each prophet was related to issues that their people were most fascinated with. Thus, for example, during the time of Moses, sorcery was very popular, and one of his signs was directly related to outdoing the weak tricks of humans.  During Jesus time, medicine was a popular issue and some of Jesus’ signs included healing the sick, raising the dead and so on.  The Arabs at the time were very proud of their literary skills and, as shall be noted shortly, the Quran is an Arabic masterpiece beyond what they could match.  However, the Prophet Muhammad was not sent only to the Arabs or only to the people of his century.  In this day and age, science has practically become a “god” to replace the traditional God of the Judeo-Christian tradition.  The Prophet Muhammad’s miracle is actually completely relevant to the field of science that captivates so many people today, once again indicating that the Prophet Muhammad was truly a prophet for all of humanity until the Day of Judgment.

[12]See I. A. Ibrahim, A Brief Illustrated Guide to Understanding Islam (Houston: Darussalam, 1997), pp. 10ff. This work, in its entirety, is available at www.islam-guide.com. Ibrahim reviews and summarizes the conclusions of Moore and a number of others.

[13]For more details on this point, see Louay Fatoohi and Shetha al-Dargazelli, History Testifies to the Infallibility of the Quran: Early History of the Children of Israel (Delhi, India: Adam Publishers & Distributors, 1999), pp. 81-93.

THE MIRACULOUS QURAN (PART 11 OF 11): A CHALLENGE FOR HUMANITY 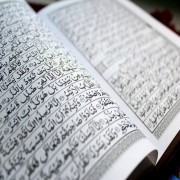 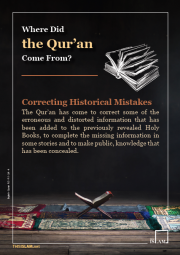