· To learn how to perform Hajj.

· Hajj - A pilgrimage to Mecca where the pilgrim performs a set of rituals.  The Hajj is one of the five pillars of Islam, which every adult Muslim must undertake at least once in their life if they can afford it and are physically able.

· Kaba - The cube-shaped structure located in the city of Mecca.  It serves as a focal point towards which all Muslims face when praying.

· Talbiyah - The proclamation Muslims chant during the pilgrimage.

· Sa'ee - It is the walking and running between the hills of Safa and Marwa.

·Eid - festival or celebration.  Muslims celebrate two major religious holidays, known as Eid-ul-Fitr (which takes place after Ramadan) and Eid-ul-Adha (which occurs at the time of the Hajj).

· Tawaf - Circumambulation around the Kabah.  It is done in seven circuits. .

The 9th Day and Beyond

ThePilgrimageHajj3.jpgThe 9th day is indeed a precious day, thus, one is to utilize every moment of it in a productive manner! One of the best things one can do is to supplicate to Allah for all that they desire in this life and in the next.  Some may perceive it to be inappropriate to ask Allah for worldly riches, but there is no sin in doing this.  In fact, the Prophet, may the mercy and blessings of Allah be upon him, supplicated for Anas, may Allah be pleased with him,

O Allah increase him in wealth, and give him many children and bless him in that

One should make an extra effort to repent and pledge to Allah that they will turn a new page in their lives.

At sunset, one is to leave the area of Arafah for Muzdalifah[1].  Since one will be with a Hajj group, they may leave a bit earlier.  Upon arriving at Muzdalifah one should perform the Maghrib prayer and Isha prayer (combining them and shortening the Isha to two units) thus allowing oneself a good night’s rest thereafter.  A common mistake that is committed by many is that they will spend their night chatting, taking selfies or surfing the net.  This is inappropriate, as the Prophet, may the mercy and blessings of Allah be upon him, indicated that one should spend this night resting as much as they can.  One should continue saying the Talbiyah at this stage of the pilgrimage.

The 10th Day (The Day of Eid)
This is the ‘action-packed’ day for the pilgrim.  The majority of the Hajj rituals are performed herein.  It is best that one follows this day’s rituals in the manner that Prophet Muhammad performed them in.

Upon getting up for the Fajr prayer and performing it, one is to utilize that time to supplicate to Allah, as well one should gather 7 small ‘chickpea’ sized stones for the ritual of stoning that takes place on this day.  Taking a few extra is recommended.

Usually after this, the Hajj group will take the pilgrims back to Mina, where they will stone the biggest pillar, which is closest to Mecca.  This pillar is known as Jamaratul-Aqabah.  It should be noted that these pillars are not the ‘devil’, but simply a pillar.  In relation to the reason behind this ritual, one can find its roots in the story of Prophet Abraham and Ismail, peace be upon them both.  The devil had approached Ismail and tried to convince him to disobey his father in these three locations.  Today stoning is conducted in obedience to the commandment of our Prophet.  With each stone that is thrown one is to say ‘Allahu Akbar’.

After stoning the Jamratul-Aqabah, one is to have their sacrificial animal slaughtered.  Nowadays, this process is more or less automated through one of the large corporations that takes care of this on behalf of the pilgrims.  Once this step is ascertained, one can shave off or trim their hair evenly.  For women, it is sufficient to clip off a small amount of hair.

Due to the infinite mercy of Islam, the Prophet gave us permits which make it easy for us this great undertaking.  Imagine, if all the pilgrims had to strictly follow this order, what immense and massive difficulty would there be upon people! In fact, the Prophet, was approached by many companions who had informed him that they did not do the actions of this day in his sequence.

The Prophet said to them

If this is the pilgrims first Hajj, they should stay with their groups.  Getting lost during any stage of Hajj will be a memorable experience you don’t want to have!

The 11th, 12th & 13th Day
These days are known as the Days of Tashreeq.  Prophet Muhammad described these days

These are days of food, drink and remembrance of Allah

The primary action one will do within these blessed days is the stoning of the three Jamarat.  The stones for this are to be gathered from Mina itself.  One will find ample pebbles of suitable sizes under the carpets of their own tents! Once the sun moves from its zenith, it is time to start the stoning ritual.  Beginning with the smaller one known as ‘Jamarat as-Sughra’, one is to stone it with seven stones, saying ‘Allah Akbar’ with each one.  Thereafter, one is to move a short distance away and make a long supplication; in fact, this is a time wherein Allah accepts one’s supplication.

Thereafter, one would head to the second pillar known as ‘Jamratul-Wusta’, which is the pillar in the middle.  What was done at the first pillar would be repeated here.  After the supplication, one would head towards ‘Jamratul-Aqabah’ or the closest pillar to Makkah.  The same is done here, save that one would not supplicate after stoning.

With this, one would have completed the primary rituals on this day.  Beyond this, one is to perform each prayer in its time, while shortening four unit prayers to two units only.  These steps are repeated on the 12th day and the 13th day, if one chooses to stay the extra day.

let the last ritual you perform (before you leave Mecca) be Tawaf around this House (i.e.  the Kabah

The Prophet was asked

What is the reward of one who performs the rituals in Hajj?” He responded saying: “When a person leaves his home for the sake of performing Hajj, with every step he takes, he will receive a reward or Allah will remove a sin from his record.  When one stands on Arafah, Allah will descend to the lowest Heaven and say: ‘look at My slaves, dusty with unkempt hair.  You (i.e.  the angels) are My witnesses that I have forgiven them all their sins, even if they be as numerous as the stars in the sky and as numerous as the grains of sand in the Desert of Aalij and when one throws the stones at the Jamarat, My slaves would not know what reward I have in store for them until the Day of Resurrection!’ With each hair that falls off of the pilgrim’s head (upon it being shaved) the pilgrim will receive a light on the Day of Resurrection! Once he finishes the Farewell Tawaf, he would return to the sin-free state, as the day he was born 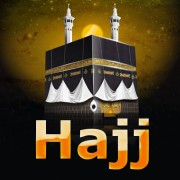 Why Do Muslims Perform Pilgrimage (Hajj)