The Purpose Of All Religious Practice

ll [religious] practice prescribes the remembrance of God, and to achieve this remembrance is its goal.

And establish regular prayer for My remembrance.

My remembrance is said to have an active sense: In order that I [God] might remember you thereby. It is also said to refer to the One remembered: That you might remember Me thereby, with the letter lam [in li-dhikrii, for My remembrance] in both cases expressing purpose.

Others, however, argue that the lam carries a sense of time: Establish the prayer when I am mentioned, as in the verse,

Establish the prayer at the suns setting

In these two verses, time is certainly meant, but [in the present case] this explanation is merely an opinion. The difference is that [in the letter two verses], the lam of time precedes the nouns of time [the Suns setting and the Day of Judgment]; whereas [in the first verse], it precedes a noun [My remembrance] derived from a verb, unless [we agree that] an expression of time is understood, so that the verse means at [the time of] My remembrance – which is possible.

Recite what has been revealed to you of the Book and establish the prayer. Verily, the prayer restrains from shameful and unjust deeds. And Gods remembrance is greater.

It has been said that this means, In prayer you remember God and He remembers you, and His remembrance of you is greater than your remembrance of Him. According to Ibn `Abbas, Salman, Abu l-Darda and Ibn Mas`ud, this is the meaning. And Ibn Abi l-Dunya related from Fudayl ibn Marzuq that `Atiyya said that

And Gods remembrance is greater

Remember Me, I shall remember you.

Ibn Zayd and Qatada, however, held that it meant the remembrance of God is greater than everything. And when Salman was asked, Which is the best practice? he answered, Do you not read the Quran:

And God’s remembrance is greater ?

This is supported by thehadith from Abu l-Darda already quoted above:

 Should I tell you which of your deeds is best? Which purifies you most before your Sovereign … and is better for you than giving away gold and silver?
The Shaykh of Islam Abu l-`Abbas [ibn Taymiyya] said, The correct understanding of the verse is that the prayer has two major purposes, one greater than the other: prayer restrains from shameful and unjust deeds and contains the remembrance of God Most High; the remembrance of God contained in the prayer is [something] greater than the restraint from shameful deeds and injustice.

Ibn Abi l-Dunya said that when Ibn `Abbas was asked which deed was most excellent, he answered, And Gods remembrance is greater. In the Sunan, [there is a hadith from `Aisha where the Prophet says, The circumambulation around the House, the course between Safa and Marwa and the casting of stones at the Pillars are [all] for maintaining the remembrance of God Most High. This hadith was narrated by Abu Dawud and Tirmidhi, and is considered both good and sound

Said `Ubayd ibn `Umayr, If you find this night too long for standing, and you find Yourselves too worried about your money to give it away and too cowardly to fight your enemy, then invoke God Most High abundantly. [Isfahani, Hilya, 3.267]

Hearts find rest in the remembrance of God 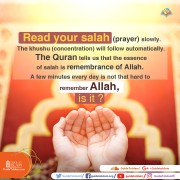 The essence of Salah is remembrance of Allah 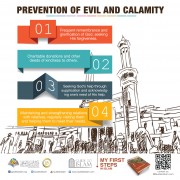 Prevention of evil and calamity