The Questioning in the Grave (part 1 of 2): Death is not the End

·       To understand that the grave is the first stage of the life in the Hereafter.

·       Hadith - (plural – ahadith) is a piece of information or a story.  In Islam it is a narrative record of the sayings and actions of Prophet Muhammad and his companions.

·       Sahabah - the plural form of "Sahabi," which translates to Companions.   A sahabi, as the word is commonly used today, is someone who saw Prophet Muhammad, believed in him and died as a Muslim.

·       Barzakh - intermediate stage between this life and resurrection. 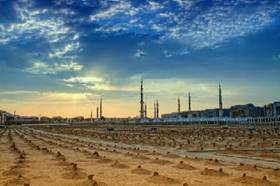 The grave is the abode of the body after death and death is something we will all experience.  There is no denying this or hiding from it.  Death will come to each and every one of us.  Some will die earlier in their lifespan than others, according to the will of Allah but everyone who lives will die at his appointed time, whether he is amongst the pious or wicked.  Therefore it is important that each and every one of us understands what will happen after we die.  We die and we are buried but that is not the end, on the contrary it is just the beginning.

Every soul shall taste death

The prophets of Allah called their people to worship One God, Allah the Almighty, and they also taught the people to believe in life after death.  It was thought of as an extremely important concept, so much so that failure to believe in it rendered all beliefs meaningless.  In accordance with this, one of the 'pillars of faith' is belief in life after death.  This life is often referred to as the Hereafter, and the first stage of the Hereafter is life in the grave.

The grave is the first stage of the Hereafter

With this in mind it is important to remember that this worldly life is a series of trials and tests that determine our place in the Hereafter.  All actions are recorded and they form the basis of any punishment or reward a person is destined to receive.

“This is because of that (evil) which your hands have sent before you.  And certainly, Allah is never unjust to (His) slaves

Life in the grave is often referred to as life in the Barzakh.  Barzakh literally means an obstacle, hindrance or something that separates one thing from another such as this following description in the Quran:

“He has let loosed the two seas (the salt water and the sweet) meeting together. Between them is a barrier (Barzakh), which none of them can transgress

As such it is a barrier that cannot be crossed except by the permission of Allah.  In the context of life and death, Barzakh is the period between a person's death and his resurrection on Judgment Day.  The very nature of life in the Barzakh is a matter of the ghayb and thus its details are known to Allah alone.  However Allah did reveal some matters of the ghayb to Prophet Muhammad and he in turn conveyed those things to us.

After any burial Prophet Muhammad would remind his companions to ask forgiveness for their brother or sister, and to ask Allah that they remain steadfast at the time of questioning.[1]  This was because Prophet Muhammad said that what comes after the burial could be very difficult indeed.   After informing his sahabi that the grave is the first stage of the Hereafter,

if one finds salvation (at this stage) the succeeding (stages) become easy for him, and if he does not find salvation in it, what follows this stage is very hard upon him.” Prophet Muhammad’s beloved wife Aisha recalls that the Prophet used to regularly seek refuge with Allah from the torment and tribulations of the grave

And it is understood by the scholars of Islam that the tribulations refer to the questioning.

Thus it would be pertinent for us to follow his example and seek refuge with Allah from being punished in the grave.  Prophet Muhammad himself, in a relatively long but very descriptive and informative hadith explains very clearly what will happen before the questioning.  It was a subject that the sahabah were very interested in and they describe themselves as sitting like birds, meaning they were quiet and still, when listening to Prophet Muhammad talk about the life in the grave.[2]

“When the believing slave is about to depart this world and enter the Hereafter, there come down to him angels with white faces like the sun, and they sit around him as far as the eye can see.  They bring with them shrouds from Jannah (Heavenly Abode) and perfumes from Jannah.  Then the Angel of Death comes and sits by his head, and he says, ‘O good soul, come forth to forgiveness from Allah and His pleasure.’ Then it comes out easily like a drop of water from the mouth of a water-skin.  When he seizes it, they do not leave it in his hand for an instant before they take it and put it in that shroud with that perfume, and there comes from it a fragrance like the finest musk on the face of the earth.  Then they ascend and they do not pass by any group of angels but they say, ‘Who is this good soul?’ and they say, ‘It is So and so the son of So and so’, calling him by the best names by which he was known in this world, until they reach the lowest heaven.  They ask for it to be opened to them and it is opened, and (the soul) is welcomed and accompanied to the next heaven by those who are closest to Allah, until they reach the seventh heaven.  Then Allah says: ‘Record his place in the book, and return him to the earth, for from it I created them, to it I will return them and from it I will bring them forth once again.’ So his soul is reunited with his body and there come to him two angels who make him sit up.” 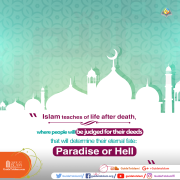 How do Muslims view death?

Never underestimate the smallest of your efforts