The Qur'an Has Some Questions for You

A unique aspect of the Qurʾān is that it constantly encourages its readers to ponder, think, and reflect. Similarly, it criticizes blind following and closing one’s eyes to the truth. The Qurʾān invites its readers to not blindly adopt the beliefs society or family impose on them. It seeks to liberate the mind from prejudices, bias, and narrow-mindedness. The Qurʾān constantly asks questions so that people can reflect on their purpose in life, creation, death, and hereafter. The Qurʾān asks people to question how everything came into existence.

Were they created from nothing or did they create themselves? (Qurʾān 52:35).

Islam is a religion that is based on evidence. A verse of the Qurʾān is called an ayah. An ayah literally means a sign. The verses of the Qurʾān serve as signs, evidence, and indications of God’s existence. The Qurʾān also refers to other things as ayahs such as nature, the human body, the changing of night and day, and the universe.

Do they not travel through the land, so that they may have hearts with which to understand or ears with which to listen? Truly it is not their eyes that are blind, but their hearts which are in their breasts” (Qurʾān 22:46).
Indeed, the worst of beasts in the sight of Allah are the deaf and the dumb, those who understand not” (Qurʾān 8:22).

The most crucial aspects of the Qurʾān is to educate people about the truth. The Qurʾān views itself as a book that enlightens the mind and soul.

This is a message to all people, so that they may be warned by it, and know that He is the only God, and so that those who have minds may take heed (Qurʾān 14:52).

The Qurʾān encourages people to ask questions. If one is unaware, they are to seek knowledge from scholars and experts.

So ask the people of reminder (knowledge) if you do not know (Qurʾān 21:7).

There are signs and lessons to be learned from everything around us. The universe has signs or evidence of God’s existence as well as our own self. Our hearts are constantly beating from the minute we are born until our last breath. Our bodies are full of miracles that can never be matched by technology. God has created our body so that in most cases it heals itself. If the body gets a cold or a cut, the body will slowly heal itself. Our ability to speak and make different sounds with our tongue is a sign of God. If one just pauses and reflects on his or her own body they will see that it must have been created by an intelligent being.

And in the earth are portents for those whose faith is sure. And also in yourselves, do you not see? (Qurʾān 51:20-21).

The Qurʾān asks several questions about the most simple, but necessary, aspects of our existence.

Have you considered the seeds you sow in the ground? Is it you who make them grow or We? If We willed, We could make it [dry] debris, and you would remain in wonder, “We are burdened with debt. Rather, we have been deprived.” Have you considered the water that you drink? Is it you who brought it down from the clouds, or is it We who bring it down? If We willed, We could make it bitter, so why are you not grateful? (Qurʾān 56: 63-70).

However, most people do not reflect on the signs of God, even though they surround us in all directions. We are too busy focusing on food, drink, entertainment, and materialism. The Qurʾān praises those who pause and reflect on God’s signs and blames those who do not.

And those who, when they are reminded of the signs of their Lord, do not turn a deaf ear and a blind eye to them (Qurʾān 25:73).
And how many a sign within the heavens and earth do they pass over while they are turning away from it? (Qurʾān 12:105).

If one pauses and reflects on the creation of the heavens and earth, they will come to the natural conclusion that God exists.

For people of understanding the existence of God is very clear. However, besides this, the Qurʾān is the only religious scripture that encourages people to think, reflect, and ask questions in such an explicit manner. The purpose of the Qurʾān is to liberate the mind from the shackles of heedlessness and ignorance. The universe around us and the verses of the Qurʾān are themselves signs of God’s existence. Our time on this earth is limited. It is a shame if one spends an entire lifetime without ever giving serious consideration to their existence, purpose, and afterlife. Islam has the answers to all of these questions. Do not be of those who do not have the ability to see past the false stereotypes about Islam and Muslims. 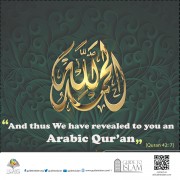 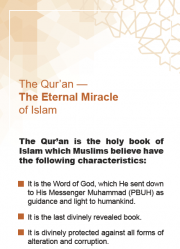 The Qur’an — The Eternal Miracle of Islam

"It is Allah who sends the winds"