The Seven Under the Shade of Allah (SWT)

There are seven whom Allah will shade in His Shade on the Day when there is no shade except His Shade: a just ruler; a youth who grew up in the worship of Allah, the Mighty and Majestic; a man whose heart is attached to the mosques; two men who love each other for Allah’s sake, meeting for that and parting upon that; a man who is called by a woman of beauty and position [for illegal intercourse], but be says: ‘I fear Allah’, a man who gives in charity and hides it, such that his left hand does not know what his right hand gives in charity; and a man who remembered Allah in private and so his eyes shed tears.’

In this beautiful Hadith, the Prophet ﷺ spoke about small acts of worship which result in such a huge reward: shade on the Day when there will be no shade except His Shade. This may not seem like much at first but then reflect upon the following Hadith :

So who would want more then, on this Day, than to be under the Shade and protection of Allah Azza wa Jal. Let us examine now the characteristics and virtues of these seven categories of people who will be worthy of such an exalted position on the Day of Gathering.

The concept of Justice in Islam is very important and it is something which the Muslim – Ruler and the ruled – must apply in all matters without exception. Justice means to give each the right he deserves: Muslim or non-Muslim, relative or stranger, friend or enemy. Allah says:

‘…And do not let hatred cause you to act unjustly, that is nearer to piety

Unfortunately, even if we admit this in theory, we quickly forget it in practice. So we find that when we speak about our friends and loved ones, we praise them beyond reason and when we speak about those whom we hold difference with, we can find no good in them and we just capitalise on their bad points. This is far removed from the justice which Allah loves and gives great reward for, as mentioned in the following Hadith : ‘The doers of justice will be on thrones of light at Allah’s Right Hand – and both of Allah’s Hands are Right Hands’– those who were just in their Ruling, with their families and in all that over which they were given authority.

The Prophet ﷺ assigned to Abdullah ibn Mas’ud the open spaces in Medina between the dwellings and palm gardens of the Ansar. When the Banu Abd ibn Zuhrah said, “Remove from us the son of Umm Abd (Ibn Mas’ud),” he ﷺ replied, “Why then did Allah send me? Allah does not bless a people among whom a weak man is not given his right.” Baghawi transmitted it in Sharh as-Sunnah. Sunan at-Tirmidhi no.3003

The concept of justice is most important for the Ruler, since he is in charge of his people and the primary disposer of justice in the land. For this reason, the Ruler is given special mention as one of the seven who will be honoured with Allah’s Shade.

The great scholar, Ayyub as-Sakhtiyani (d.131H) said, ‘From the success of a youth is that Allah guides him to a scholar of the Sunnah.’ Hasan – Reported in Sharh Usulis-Sunnah of al-Lalika’i (no.30).

Indeed, it is a great blessing from Allah for a youth to be guided towards worship and be befriended by the righteous, since it is in youth that a person is most vulnerable to the temptations of life and liable to drift away from the Islamic Path. This becomes apparent when we look at society around us and we see that most of the worldly distractions, such as music, games, clubs, fashion etc. are all specifically targeted at the young. ‘You’re only young once!’ they are told, which is why many Muslims nowadays waste their youth thinking that they will pray, wear hijaab and go on Hajj, etc. when they are old, as if they have a guarantee of longevity from Allah! How well we would do to heed the Prophet’s ﷺ advice when

(Sahih – Narrated by Ibn Abbas & collected in al-Haakim & others. Authenticated by Shaykh ‘Ali ibn ‘Abdul Hamid in Forty Hadith of the Call and the Caller. )

3. ‘A man whose heart is attached to the mosques…’

There is great encouragement in the Sunnah for men to pray in the mosques and the reward associated with it is tremendous. Not only does it make the person eligible for Allah’s Shade on the day of Judgement, but, ‘he does not take a step [towards the mosque except that because of it, he is raised by one rank and one sin is removed from him. Then when he prays, the Angels do not cease supplicating for him [for] as long as he remains at his place of Prayer [sayings]:

O Allah send blessings upon him, O Allah have mercy upon him…’

It must be emphasised here however, that all the Hadith encouraging the men to be attached to the mosques are not intended to lead one to the conclusion that Islam is a Religion which should be confined to the mosques, as many people imagine. Nonetheless, the mosque should be at the heart of the Muslim community, and the role of those in authority of the mosques is vital here. They are the ones mainly responsible for making the mosque a welcome refuge for the Muslims, rather than an arena for politics and power struggles as many seem to have become these days. And we seek Allah’s refuge from this!

4. ‘Two men who love each other for Allah’s sake, meeting for that and parting upon that….’

Having mutual love for the sake of Allah is one of the great doors leading to the good of the Hereafter and a cause of tasting the sweetness of Iman in this world. Loving one another for Allah’s sake means that the Muslim does not love another except for the correctness of his Deen. So it does not matter what the person looks like, what he wears, how rich or poor he is, where he comes from, or what the colour of his skin is – perhaps you dislike everything about him, but you love him for his Iman: this is loving for Allah’s sake.

 Allah, the Mighty and Magnificent says: ‘Those who have mutual love for the sake of My Glory will have pillars of light and will be envied the Prophets and martyrs.’

Subhan Allah! Imagine being envied by Allah’s chosen Messengers and those who were slain in His Path! Such is the reward of those who love one another for Allah’s sake.

5. ‘A man who is called by a woman of beauty and position but he says: ‘I fear Allah…’

This world is full of temptations which lead to burning in the Fire and amongst them is that which comes from women. Many a man has led his soul into destruction on account of the lure of a woman which is why the Prophet ﷺ warned his Ummah specifically about this. He ﷺ said,

 ‘The world is sweet and green and verily Allah is going to install you as successors upon it in order to see how you act. So avoid the allurement of women: verily the first trial for the Children of Israa’eel was caused by women.’ Narrated by Abu Sa’id al-Khudri & collected in Sahih Muslim (eng. trans.) vol.4, p.1432, no.6606
The most important provision which we need to protect ourselves from this and all other temptations in life is the fear (khawf) of Allah. This fact is alluded to in the following Qur’anic Aayah:

And as for him who feared standing before his Lord and restrained himself from impure evil desires, verily Paradise will be his abode.

This describes the type of person who goes to great lengths to protect himself from ar-Riya. Ar-Riya means to do deeds in order to earn the praise and recognition of people. This sin destroys all the benefits that lie in righteous deeds and brings on a serious punishment for the one who commits it. It is particularly dangerous because it is in man’s nature to desire and enjoy the praise of others. Thus, great care has to be taken to ensure that one’s intentions begin and remain pure whenever good actions (such as charity) are being done. Not like what we see today where we have mosque notice boards announcing who gave what to whom, why and when!

‘O you who believe! Do not render vain your charity by reminders of your generosity or by injury, like him who spends his wealth to be seen of men and he does not believe in Allah nor in the Last Day.’

May Allah preserve us from this.

7. ‘…A man who remembered Allah in private and so his eyes shed tears.’ Our noble Prophet ﷺ informed us:

 ‘If you knew what I knew, you would laugh little and weep much.’

Crying is not a sissy’ thing to do. The Prophet ﷺ, who was the best of all creation, would weep as would all of his Companions. Tears are a genuine expression of fear of Allah’s Punishment and of our sincere love and awe of Him. But how often do we remember Allah in seclusion and are then moved to tears? How much do we laugh and how little do we weep? The Prophet ﷺ said,

Alhamdulillah, through these seven types of people mentioned in the Hadith , we have been given clear signposts of the way to attain Allah’s pleasure and satisfaction. So dear brothers and sisters in Iman, devote yourself to being one amongst those seven, for indeed fortunate will be those who are granted Allah ‘s Shade on the Day when there will be no shade but His. 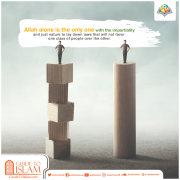 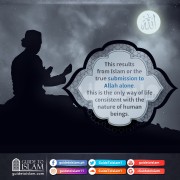