The Worship of Allah Alone

Undoubtedly, the greatest goal of Islam and its greatest contribution to the welfare of humanity is the true and pure worship of Allah alone, without associating any partners with Him.[1] This is in reality the ultimate purpose and goal of a human.

There can be no goal more honorable or noble than this goal for a human being.

Pure monotheism is the only belief system that provides the true answers to the questions that perplex virtually every human: “Where have I come from? Where am I headed? For what purpose do I exist?”

As for the question, “Where have I come from?” Islam explains that humans are honored creatures created by Allah in a very special way and having the freedom to choose to be among the noblest of creatures or among the basest of all creatures. Thus, Allah says:

Verily, We created man of the best stature (mould), Then We reduced him to the lowest of the low, except those who believe and do righteous deeds, they shall have a reward without end (Paradise)

The answer to, “Where I am headed?” is that the human is headed back to a meeting with his Lord and Creator. This momentous occasion will occur after his death in this worldly life. There will be no escape from this encounter. At that time, the human will be fairly and equitably judged. All of the deeds that he performed in this life will be weighed.

This reckoning will start with his most important deed: his attitude toward his Gracious and Merciful Creator who created him, provided for him, sent him guidance, warned him of a punishment for those who turn away from the truth and promised a great reward for those who accepted the truth, were grateful to Him and submitted to Him.

Concerning, “For what purpose do I exist,” the human has been created for the noblest of all purposes: the worship of Allah alone or, in other words, to become a true and sincere servant of Allah. One can imagine all sorts of goals that people may have in this world. They may seek to end diseases in this world or bring about world peace. In general, though, those admirable goals are usually tainted.

One may seek them just for egotistic reasons, such as to be remembered or praised as the person who did such and such. They may be sought while the individual turns his back on his Creator, thus showing arrogance and ungratefulness as well as demonstrating an ignorance of how truly noble goals can be achieved. In reality, however, all of those goals, which can be considered simply sub goals, fail in comparison to the goal that will lead to excellence in one’s soul and one’s deeds as well as eternal bliss in the Hereafter. Actually, any truly good goal of this life can only be part of the true worship of Allah.

Fulfilling one’s true purpose and being successful upon meeting one’s Lord is completely dependent on adhering to a true and unadulterated monotheism. This is the monotheism found in Islam. Many people claim to believe in “monotheism” and the fact that there is only one God. However, on many occasions, this “monotheism” is tainted in many ways. In some early pre-modern civilizations, people began to identify “sons” and “daughters” with God. Unfortunately, this clear contradiction of pure monotheism has been carried over into the modern age by no less a popular religion than Christianity. It is not unusual to hear Christians praise Jesus, thank Jesus and even pray to Jesus, sometimes virtually forgetting "the Father." Although Christians may resort to logical gymnastics to affirm that this is still worshipping only one God, in reality it cannot be considered a true monotheism. In fact, most, if not all, of the contemporary trinitarians will argue that Jesus is co-equal yet unique from the Father. In other words, they have lost pure monotheism.

It may take some time for the new Muslim to realize all the ways in which people associate partners with God and fail to realize true monotheism. The Christian convert to Islam may readily recognize that the above referred to belief in Trinity is certainly not monotheism. At the same time, though, he may not yet realize how accepting priests, for example, as ultimate lawgivers is also a way of associating partners with God.

No priest—nor any human for that matter—has any right to over rule or abrogate any of God’s laws. This is also a contradiction of pure monotheism. Hence, Allah says:

They (Jews and Christians) took their rabbis and their monks to be their lords besides Allah [by obeying them in things which they made lawful or unlawful according to their own desires without being ordered by Allah], and (they also took as their Lord) Messiah, son of Mary, while they were commanded to worship none but One God. None has the right to be worshipped but He. Praise and glory be to Him, (far above is He) from having the partners they associate (with Him)

Islam is a religion that establishes pure monotheism completely and eradicates all forms of associating partners with Allah, from the most obvious to the most obscure. (Undoubtedly, Islam is the only religion that can make such a claim.) As the convert learns more and more about his faith, the light of pure monotheism, Allah willing, will shine brighter and brighter in his heart.

The True Religion (part 4 of 8): The Message of False Religions 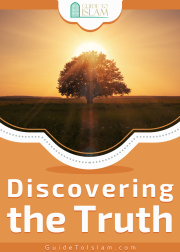