All praise is due to Allâh, Lord of all the worlds. Peace and blessings of Allâh be upon the Messenger, his household and companions.

Fellow Muslims! Fear Allâh as He should be feared. Fear of Allâh is the provision against hardships of this world and the Hereafter. It is the cause of attaining Allâh’s pleasure and averting His punishment.

Dear brethren! Man’s happiness lies in maintaining the nature upon which Allâh created the creation. He should not allow his nature to deviate from the straight path nor should he live it for neither desires and doubts nor should he left his soul at the mercy of devils among the jinn and mankind. He should rather seek the protection of his soul with Allâh, rely on Him and hold fast unto the upright religion of Allâh. Allâh says,

Fellow Muslims! Do you know the reward that Allâh has in provision for those who hold firmly unto His religion? Allâh explains this when He says,

“And whoever holds firmly to Allâh, (i.e. follows Islâm – Allâh’s Religion, and obeys all that Allâh has ordered, practically), then he is indeed guided to the Right Path.”

Brethren in faith! Uprightness means adhering to the Book of Allâh and the Sunnah of His Messenger. It is the only cause of human success and prosperity. We are in dire need of it to have all our affairs put aright, especially in this age where there are many trials and tribulations.

Uprightness on the religion of the truth is the greatest favour that Allâh gave to His servants. It is, in itself, the provision for the Last Day. Allâh commands that Muslims should remain steadfast in many verses in His glorious Book. He says,

“Verily, those who say: “Our Lord is (only) Allâh,” and thereafter stand firm and straight on the Islamic Faith of Monotheism, on them shall be no fear, nor shall they grieve. Such shall be the dwellers of Paradise, abiding therein (forever) – a reward for what they used to do.”

“So stand (ask Allâh to make) you (Muhammad (peace be upon him)) firm and straight (on the religion of Islamic Monotheism) as you are commanded and those (your companions) who turn in repentance (unto Allâh) with you, and transgress not (Allâh’s Legal Limits). Verily, He is All-Seer of what you do.”

Uprightness is to adhere to the Sunnah of the Prophet, honouring it, spreading it and disliking all that negates it. Uprightness starts and ends with actualizing Tawhîd for Allâh, Lord of all the worlds.

“Stand firm (on Islamic Monotheism by performing all that is ordained by Allâh (good deeds), and by abstaining from all that is forbidden by Allâh (sins and evil deeds)) as you are commanded, and follow not their desires but say: “I believe in whatsoever Allâh has sent down of the Book (all the holy Books,- this Qur’ân and the Books of the old from the Taurât (Torah), or the Injîl (Gospel) or the Pages of Ibrâhîm (Abraham)) and I am commanded to do justice among you.”

“They are those who stand firm on the testimony that none is worthy of being worshipped except Allâh.”
Abul-‘Âliyah said,

“They are those who are sincere to Allâh in acts of worship. They direct all acts of worship like invocation, seeking for protection; and reliance, fear, hope, vowing and slaughtering, prostration, bowing and others to Allâh alone.”

Uprightness upon the religion of Allâh is the highest goal and the greatest admonition. Sufyân bin ‘Abdillâh asked the Messenger of Allâh: “

Al-Hasan Al-Basrî used to say, “O Allâh, You are our Lord. Make us upright in Your religion.”

Brethren in Islâm! Allâh makes the rewards of uprightness the greatest reward and assures the upright Muslim of the security. Allâh says,

Allâhu Akbar! What a great honour and what a huge bliss! Ibn Kathîr said in his Tafsîr while commenting on these verses,

“Verily, those who say: “Our Lord is Allâh (Alone),” and then they stand firm, on them the angels will descend (at the time of their death) (saying): “Fear not, nor grieve! But receive the glad tidings of Paradise which you have been promised! “We have been your friends in the life of this world and are (so) in the Hereafter. Therein you shall have (all) that your inner-selves desire, and therein you shall have (all) for which you ask. “[This is] an entertainment from (Allâh), the Oft-Forgiving, Most Merciful.”

“The angels will descend on then at the time of death assuring them that they should not fear as regards what they will face in the Hereafter nor grieve over what they are leaving behind in this world like their children, family, property or debt, for Allâh will take care of all that. The angels will also give them glad tiding of the Paradise which they have been promised. They will also tell them: ‘We have been your friends and companions in the life of the world guiding you to the right path with the command of Allâh. We will also be your friends in the Hereafter, keeping your company in the graves. We will allay your fears on the Day of Resurrection, help you pass the bridge and take you to Paradise.’ The angels will also tell them, ‘You shall have all that you desire in Paradise and all that you request for shall be provided for you. All this is an entertainment and favour from Allâh, for it is He Who forgives your sins and have mercy on you.'”
Allâh says,

Fellow Muslims! The best condition of a Muslim is to follow up a good deed with another and keep away from evil deeds. Allâh says,

“And say (O Muhammad (peace be upon him)) “Do deeds! Allâh will see your deeds, and (so will) His Messenger and the believers. And you will be brought back to the All-Knower of the unseen and the seen. Then He will inform you of what you used to do.”

This condition is that of those who are close to Allâh; those who race towards righteous deed and shun forbidden things. The next degree is to follow up a bad deed with a good one. Allâh says,

“And those who avoid the greater sins, and Al-Fawâhish (illegal sexual intercourse), and when they are angry, they forgive. And those who answer the Call of their Lord (i.e. to believe that He is the only One Lord (Allâh), and to worship none but Him Alone), and perform prayers, and who (conduct) their affairs by mutual consultation, and who spend of what We have bestowed on them. And those who, when an oppressive wrong is done to them, take revenge.”

“And perform prayers, at the two ends of the day and in some hours of the night (i.e. the five compulsory (prayers)) Verily, the good deeds remove the evil deeds (i.e. small sins). That is a reminder (an advice) for the mindful (those who accept advice).”

 “Fear Allâh wherever you are, follow up a bad deed with a good one and treat people kindly.”

The worst situation of a Muslim is to follow up a bad deed with another and not to examine himself or fear Allâh or even think of repenting. So whoever chooses the worst condition and the worst characteristics has incurred loss in this world and the Hereafter, and that is clear loss.

Dear brother! Be among those who follow the way of salvation and work for the Hereafter. Obey your Lord, always remember death and the horrors that follow it and provide for that Day with whatever good deed you can. 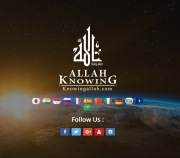 The Proof That Islam Is The Truth 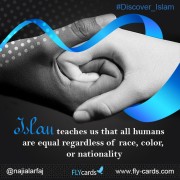 Islam teaches us that all humans are equal regardless of race, color, or nationality.