Warning against Backbitting and Tale-Carrying

Praise be to Allâh, who united the believers in a bond of brotherhood, exhorting them on cooperation, goodness, righteousness and mutual respect as regards one’s property and honor. As it was put by the Prophet (Salla Allâhu Alaihi Wa Sallam), property, honor, and life are all to be held sacred among Muslims. I testify that none worthy to be worshiped but Allâh Alone, with Whom there is no associate. He is the Lord of heaven and earth. I testify that Muhammad is Allâh’s servant and Chosen Messenger. May Allâh bless him, his family, his Companions and those who will follow them, as long as this world exists.

O people! Muslims now suffer two rampant diseases, though immunity from them is easy for those who are protected by Allâh. These two diseases are backbiting and tale-bearing. Backbiting (Ghîbah) denotes maligning a person, speaking evil about any of his characteristics or his deeds. Many of the counsels of Muslims today are not free from indulgence in backbiting people and criticizing them, despite the fact that those backbiters themselves are not free from faults and blemishes; rather they harm themselves and those who listen to their reports without denouncing them.

O Muslims! Allâh presented one who backbites his fellow Muslims in the most repulsive picture, in which he is depicted as eating the flesh of the dead body of one who is backbitten.

O Muslims! Your duty when you hear others backbite your brothers is to be earnest to forbid the backbiter and to defend the honors of Muslims, just as the case when you find a man eating from the flesh of a dead body. Allâh the Almighty said what means:

 “O you who believe! Avoid suspicion as much (as possible): for suspicion in some cases is a sin: and spy not on each other, nor speak ill of each other behind their backs. Would any of you like to eat the flesh of his dead brother? Nay, ye would abhor it. But fear Allâh: for Allâh is Oft Returning, Most Merciful”

It is likely that a backbiter will be punished on the Day of Resurrection by ordering him to eat from the flesh of the dead bodies of those whom he backbit in the world, who will be presented as dead in front of him. It was narrated in the Hadith relating the story of Mi’râj (Ascent) that: “The Prophet (SAllâhu’Alaihi wasalam) passed by people with copper fingernails, with which they scratch their own faces and chests. He asked: “Who are those, Jibrîl?” It was answered: “Those are the people who eat the flesh of other people and vilify their honor.” The Prophet (Salla Allâhu Alaihi Wa Sallam) said in an occasion:

 “O you who declared faith with your tongues, but your hearts are not imbued with faith! Do not backbite Muslims, and do not search for their faults, for if anyone searches for their faults, Allâh will search for his fault, and if Allâh searches for the fault of anyone, He disgraces and exposes him in his house”.
O Muslims! Sometimes when backbiters are advised to give up such bad habit, they plead innocence by stating that they are telling the truth. The Prophet (Salla Allâhu Alaihi Wa Sallam) was asked concerning backbiting thus: “Suppose that there are actual faults in the one I am talking about?” The Prophet (Salla Allâhu Alaihi Wa Sallam) replied:

Thus, the Prophet (Salla Allâhu Alaihi Wa Sallam) explained to his Ummah that backbiting denotes mentioning the real faults of a person. However, the worse evil is to backbite a believer by mentioning faults, which are not in him. Imam Ahmad, as well as the scholars who adopted his school, maintained that backbiting is one of the major sins. This gives a warning to Muslims to stop backbiting others and to be concerned with their own faults. Once a person finds a fault with his brother, he should advice him and guide him to eliminate such fault rather than vilifying him. This is the requisite for establishing a real bond of brotherhood based on faith, and the torch that guides to the way of Islamic methodology.

The other rampant disease is Namîmah (tale-bearing, or going about with calumnies), which denotes carrying the statements made against some people and transmitting such statements to those backbitten people, with the aim of spreading corruption and sowing enmity and hatred among people. This kind of Namîmah is considered the most grievous of all, and one who is guilty of it is to incur torture in the grave, as well as the torment of the Fire of Hell. The Prophet (Salla Allâhu Alaihi Wa Sallam) said:

 “No talebearer shall ever enter Paradise.” The Prophet (Salla Allâhu Alaihi Wa Sallam) once passed by two graves and said:  “They (The dwellers of these graves) are now being tortured, because of something which was not difficult to resist: One of them neglected cleansing his genitals following urination and the others was given to tale-bearing.”

O Muslims! Anyone, to whom a report is carried, telling that someone is vilifying him, should condemn such an act and forbid the tale-carrier from persisting in his sin. He should also take care of such a talebearer for, just as he carries tales of people to him, he most likely carries tales from him to other people. Allâh the Almighty says which translates as:

“Heed not the type of despicable man, ready with oaths, a slanderer, going about with calumnies,” 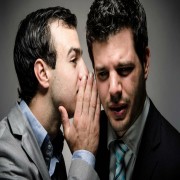 Beware of Backbiting and Gossiping