The disbelievers tried to tempt the Prophet (pbuh) with worldly riches, power, and sovereignty, laying them under his feet, hoping that this might dissuade him from calling people to Islam and worshiping Allah alone, with undivided allegiance.

An envoy of the pagan leaders, ‘Utbah bin Rabi‘ah, came to bargain with the Prophet (pbuh). He said, “If you are only seeking wealth with the matter with which you came, we will collect for you from our wealth until you become the richest among us. If you are seeking high rank, we will make you our master, and we will decide no matter without you. If you are seeking dominion, we will make you a king over us. And if that which comes to you is an evil spirit you see and cannot drive away from yourself, we will seek treatment for you. We will freely spend the foremost portion of our wealth until we cure you of it.”

In the Name of Allah, the Most Gracious, the Most Merciful: Ha­-Mim1. (This is) a Revelation from the Most Gracious, the Most Merciful. A Book whose Ayat are explained in detail. A Qur’an in Arabic for a people who know. A giver of glad tidings and a warner; but most of them turn away, so they do not hear. And they say, “Our hearts are within coverings from that to which you invite us, and in our ears is deafness, and between us and you is a barrier, so work (on your way). Indeed, we are working.” Say (O Muhammad), “I am only a human being like you. It is revealed to me that your God is only One God. Therefore, take the Straight Path to Him and seek forgiveness from Him. And woe to the Mushrikin

‘Utbah went back to his companions, who whispered to one another, “We swear by Allah, Abul-Walid has returned to you with a different countenance from that with which he departed.”

When he sat with them, they said, “O Abul-Walid, what is behind you?”

He said, “Behind me is that I heard a saying which, I swear by Allah, the like of it I have never heard. By Allah it is not poetry, or magic, or soothsaying. O people of Quraish, obey me and lay it on me. Do not come between this man and what he is in. Withdraw from him. By Allah, the saying I heard from him will be a great event. Should the Arabs defeat him, others than you will rid you of him. Should he triumph over the Arabs, his supremacy will be yours, his glory will be yours, and you will be the most fortunate of all people by him.”

They said, “He bewitched you with his tongue, by Allah, O Abul-Walid.”

He said, “That is my opinion regarding him. Do with him as you please.” 2 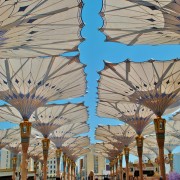 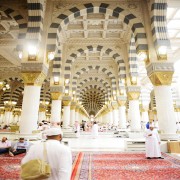 Muhammad Prophet Sent by God As A Mercy to the World