What did they say about the Quran? - Part two

“The style of the Koran is God's style. It is different, incomparable and inimitable. This is basically what constitutes the "miraculous character"(i'jaz) of the Koran. Of all miracles it is the greatest.”

“Literary prose had its start with the Koran. The inimitability associated with the book did not arrest its lasting, incalculable literary influence on subsequent Arabic output. The effect of the King James translation of the Bible in*1 English is slight compared to the effect of The Koran on Arabic. It was the Koran that kept the unity of the language and prevented its fragmentation into dialect.”

“The miracle of Islam par excellence is the Quran, through which a constant and unbroken tradition transmits to our*1 news of an absolute certainty. This is a book which cannot be imitated. Each of its expressions is a comprehensive one, and yet it is of proper size, neither too long nor too short. Its style is original. There is no model for this style in Arab literature of the times, preceding it. The effect which it produces on the human soul is obtained without any adventitious aid through its own inherent excellences.

*1 the original text is (unbroken tradition transmit to us)

The verses are equally eloquent all through the text, even when they deal with topics, such as commandments and prohibitions, which must necessarily affect its tone. Stories of Prophets, descriptions of the beginning and the end of the world, enumerations and expositions of the divine attributes are repeated but repeated in a way which is so impressive that they do not weaken the effect. The text proceeds from one topic to another without losing its power. Depth and sweetness, qualities which generally do not go together, are found together here, where each rhetoric figures finds a perfect application. How could this marvelous book be the work of Muhammad, an illiterate Arab who in all his life composed only two or three verses, none of which reveals the least poetic quality?”

“We have still another proof of the divine origin of the Quran in the fact that its text has remained pure and unaltered through the centuries from the day of its delivery until today, and will remain so, God willing, as long as the universe continues to exist.”

“On the contrary, through repeated reading it endears itself more and more each day. It arouses a deep sense of reverence and awe in one who reads or hears it. It can be readily learned by heart, so that today, in spite of the blow ebb of faith, thousands of people can repeat it by heart. In Egypt alone there are more Huffaz than there are people in all Europe who can recite the, Gospels by heart.”

“It was neither the use of force nor the efforts of insistent missionaries that brought about the rapid spread of Islam. Rather, it was the*1 fact that the book which was presented by the Muslims to conquered people, with freedom to accept or reject it, was the book of God, the word of the truth, the greatest miracle that Muhammad could have presented to the faltering ones on earth.”

“Concerning the creation, the Quran, though it refers to the primordial state and to the origin of the world doesn’t put any limitation whatever upon the powers of the human mind, but leaves it free go its own way.”

“And thus, with an allusion to man's consciousness, intellect and knowledge, began the revelation of the Koran,”

“Often we would read the Koran together and discuss its ideas; and Elsa, like me, became more and more impressed by the inner cohesion between its moral teaching and its practical guidance. According to  the Koran, God did   not ask    for blind submission on the part of man but rather appealed   to his intellect; He does not stand apart (from man's destiny but was nearer to you than the vein in you,  neck; He did not draw any dividing line between faith and social behavior;”

(3) “We knew now, beyond any doubt, that it was а God-inspire book I was holding in the hand: for although it had been placed before man over thirteen centuries ago, it clearly anticipated something that could have become true only in this our complicated, mechanized age. At all times people had known greed: but at no time  before this had greed outgrown а mere eagerness to acquire things and became an obsession that blurred the sight of everything else: an irresistible craving to get, to do, to contrive more and more; today more than yesterday, and more tomorrow than today. Then, I saw, was too the mere human wisdom of а man of а distant past in distant Arabia. However wise he has*1 been, such a man could not by himself have forecast the tournament for this twentieth century. Out of that: Koran spoke а voice greater than the voice of Muhammad.

“If the repeated insistence of the Koran upon good works were not enough, would be conclusively proved by the comprehensive definition of birr in the noble verse, Chapter 2, 172: not only belief in God, the Last Day, the angels, the Scripture and the prophets, but charity to all for the love of God, steadfastness in prayers, loyalty to the plighted word, and patience under all afflictions these are the qualities that mark out the truly believing and the truly God fearing. Birr is thus the crown of true belief, when the believer at last realizes and responds to the ever-presence of God in all his thoughts and conduct.”

Hamilton Gibb, “Studies on the civilization of Islam”,

“This, then, is the message which the Koran conveyed to the first generation of Muslims and has conveyed to all generations ever since. It is a record of the *1 direct living experience of God, both absolutely and in relation to the common affairs of life, and a summons so to order one's life as to be able to share it. By following its precepts, by striving to grasp, not with his intelligence only but with his heart and soul, the spirit of its teaching, the Muslim seeks to recapture something of the intuitive vision and of the experience of the beloved Prophet. The significance of its every phrase is enhanced for him by his belief that it is the literal Word of God, yet even if this were not an article of doctrine its value to him as a living source of religious inspiration and insight would scarcely be affected.”

Hamilton Gibb, Studies on the civilization of Islam, P 192

1* (It was a record of direct living experience)

“Whatever Islam may have incorporated of earlier religious ideas does not alter the fact that the religious attitudes expressed in and mediated by the Koran constitute a new and distinctive religious structure.”

Hamilton Gibb, Studies on the civilization of Islam, P. 192

“Because the job of translating the Quran in all of its rhythmic power into another language requires the service of one who is a poet as well as a scholar, not until recently has there been a good rendering that has captured anything of the spirit of Muhammad's revelation.     Many of the early translators were not only unable to retain the beauty of the Arabic but were also so filled with prejudices against Islam that their translations suffered from bias. However, even the best possible interpretation of the Koran in a written form is not able to retain the compelling cadence of the chapters as they are chanted by the Muslims.      It is only when the Westerner hears portions of the Koran recited in its original language that he comes to appreciate something of the grandeur and the power of its words.”

“It became the task of Muhammad's secretary, Zayd ibn-Thabit, to bring these sayings together in textual form.   Abu Bakr had directed the work, and later, after a revision at the command of Uthman, the Koran took its standard and final form that has come down to us unchanged.”

“The older or short suras were revealed at Mecca before the Hegira and the newer or long suras long to the Medina period. The short ones seem far more inspirational than the long; their sentences have a rhythmic connection even though there is no regular meter. To hear the suras recited in the original Arabic often produces something akin to a spellbinding or hypnotic effect.  Like other great works of art in language, the Koran was intended to be recited aloud, and it must be heard to be judged fairly and to be appreciated. lf the Koran represents the direct word of God-as is believed by all good Muslims then its chief value rests on*1 its contents rather than its literary form. That form, in spite of its uniqueness, did not establish the pattern for future poetry since, not being poetical in the true sense of the term; it could not serve as a model. As the actual word of God, it was beyond imitation there simply was nothing like it.”

A Source Beyond Man’s World 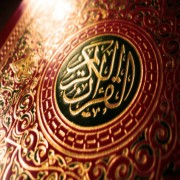