What do Muslims Believe?

A Muslim believes in the following 6 articles of Faith:

A Muslim believes in ONE GOD, Supreme and Eternal, Infinite and Mighty, Merciful and Compassionate, Creator and Provider. God has no father or mother, no son or daughter. None is equal to Him. He is God of all humankind, not of a special tribe or race.

God is High and Supreme but He is very near to the pious thoughtful believers; He answers their prayers and helps them. He loves the people who love Him and forgives their sins. He gives them peace, happiness, knowledge and success. God is the Loving and the Provider, the Generous, and the Benevolent, the Rich and the Independent, the Forgiving and the Clement, the Patient and the Appreciative, the Unique and the Protector, the Judge and the Peace. Many of these attributes of God are mentioned in the Quran.

God creates in humans the mind to understand, the soul and conscience to be good and righteous, the feelings and sentiments to be kind and humane. If we try to count His favors upon us, we cannot, because they are countless. In return for all the great favors and mercy, God does not need anything from us, because He is Needless and Independent. God asks us to know Him, to love Him and to enforce His law for our benefit and our own good.

2. Messengers and Prophets of God

A Muslim believes in all the Messengers and Prophets of God without any discrimination. All messengers were mortals, human beings, endowed with Divine revelations and appointed by God to teach mankind. The Holy Quran mentions the names of 25 messengers and prophets and states that there are others. These include Adam, the first Prophet, along with Noah, Abraham, Ishmael, Isaac, Moses, Jesus and Muhammad, the last of the Prophets (peace be upon them all). The key message brought by all Prophets was the same: to believe in One God and not to associate partners with Him, to stay away from sins and to lead a life devoted to earning God’s pleasure.

3. Revelations and the Quran

A Muslim believes in all scriptures and revelations of God, as they were complete and in their original versions. Muslims believe in the original scriptures that were given to previous messengers; for example David received the Psalms (Zabur), Moses the Torah (Taurat) and Jesus the Gospel (Injeel). However, the previous scriptures do not exist today in the original form in which they were revealed.

The Quran is the last testament in the series of divine revelations from God, and Muslims recite and turn to it for guidance in all aspects of their life. It comprises the unaltered and direct words of God, revealed through the Angel Gabriel, to the final Prophet, Muhammad, peace be upon him (pbuh), some 1400 years ago. The Quran is unique because it is the only revealed book that exists today in the precise form and content in which it was originally revealed.

The Quran is unrivaled in its recording and preservation. The astonishing fact about this scripture is that it has remained completely unchanged over the past fourteen centuries, a fact that is attested to by both non-Muslim and Muslim scholars alike. There are no versions of the Quran and every copy in the world remains identical, word for word in its original language Arabic. Muslims to this day continue to emphasize the importance of memorizing the Quran word by word, as a whole or in part, recognizing that it is the Speech of God and not a book written by Muhammad (pbuh), as sometimes erroneously thought.

Angels are a creation of God. They are purely spiritual and splendid beings that require no food or drink or sleep. They have no physical desires or material needs. Like other creations of God, Angels spend their time worshiping God. In contrast to human beings, Angels do not have free Will – they can only obey God and do not have the ability to disobey Him. Each Angel is charged with a certain duty. Angels cannot be seen by the naked eyes.

A Muslim believes in the Day of the Judgment. This world as we know it will come to an end, and the dead will rise to stand for their final and fair trial. On that day, all men and women from Adam to the last person will be resurrected from the state of death. Everything we do, say, make, intend and think are accounted for and kept in accurate records. They are brought up on the Day of Judgment.

One who believes in life after death is not expected to disobey God. They will be ever-conscious that God is watching all their actions and the angels are recording them.

People with good records will be generously rewarded and warmly welcomed to Paradise. People with bad records will be fairly punished and cast into Hell. The real nature of Heaven and Hell are known to God only, but they are described by God in familiar terms in the Quran.

A Muslim believes in the ultimate Knowledge and Power of God to plan and execute His plans. God is Wise, Just, and Loving, and whatever He does must have a good motive, although we may fail sometimes to understand it fully. The believer should have strong faith in God, recognizing that their own knowledge is limited and their thinking is based on individual consideration. In contrast, the Knowledge of God is limitless and He plans on a universal basis. Humans should think, plan and make sound choices and then put their trust in God. If things happen as they want they should praise God. If things do not happen as they want they should still praise God, recognizing that He knows best what is good for the affairs of mankind. 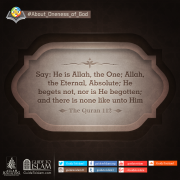 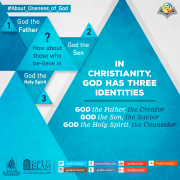 How about those who believe in?