What Is the Status of Women in Islam?

Islam sees a woman, whether single or married, as an individual in her own right, with the right to own and dispose of her property and earnings without any guardianship over her (whether that be her father, husband, or anyone else).  She has the right to buy and sell, give gifts and charity, and may spend her money as she pleases.  A marriage dowry is given by the groom to the bride for her own personal use, and she keeps her own family name rather than taking her husband’s.

Islam encourages the husband to treat his wife well

as the Prophet Muhammad  said

Mothers in Islam are highly honored.  Islam recommends treating them in the best way.

A man came to the Prophet Muhammad  and said

Flirtation between the Couple

Results of the Spread of Promiscuity and Fornication 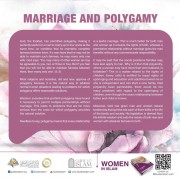