The Prophet Muhammad ﷺ had a pleasant face that was round, white, and fair. His hair fell to his ear lobes.  His beard was thick and black. When he was pleased, his face would light up. His laugh was no more than smiling.  His eyes were blackish, and his eyelashes were long.  His long eyebrows were curved.  Both in his beard and on his head, he had very few white hair. When the eyes of Abdullah ibn Salam, the chief rabbi of Medina at the time, fell on his face, he declared that such a noble face could not be the face of a liar!

He was of medium height, neither tall nor short. He walked inclining forward. He wore tanned leather sandals. His pants would reach to the middle of his shin or sometimes just above his ankles.

On his back, towards the left shoulder was the ‘Seal of Prophethood’. It was the size of a pigeon’s egg with spots like moles on it.  His palms were described to be softer than the brocade of silk.

He would find comfort and delight in praying and sleep during the first part of the night, then stand up, pray, and continue to pray for so long that his feet would swell up. He would fast the month of Ramdan and would fast three days every month.

He was an amazing man. He never got angry for personal level, rather he would get upset if God’s law was violated. The weak and the strong, relatives and strangers, noble and lowly, rich and poor were all equal in his eyes when it came to the truth.

He never betrayed and forbade treachery. He was sincere and truthful. He never paid back with evil, but would remain calm and patient. He never struck a woman or an animal.

He was not good in poetry, but was a master of prose. His words were few, but meaningful. Was not picky about food and never spoke ill of any food. If ate it if he liked it, but would not criticize it if he didn’t.

He dealt with others with the best manners. He wanted good for others, be they Muslims, Jews, Christians, or pagans. He would accept gifts and reciprocate by giving gifts. He would never accept charity, but was charitable to others. His generosity reached its peak in Ramadan.

He would mend his own shoes, patch his own garments, milk the sheep, and help his wives with housework.

He was humble. He was soft at heart and cry on occasion. He won’t let people walk behind him and would accept the invitation of rich or poor. He would help the poor, attend their funerals, and visit the sick. He would cover the faults of others. He was gentle with the poor, widows, children, the elderly, and even the animals, and warned against harshness. He encouraged others to forgive each other. He was He would sociable and would joke around with others, but would never hurt their feelings. He was not give people a cold shoulder and would accept an apology.

Who Was Muhammad ﷺ?

The Prophet of Islam ﷺ, to whom we shall henceforth refer simply as the Prophet ﷺ, is for the West the most misunderstood reality within the Islamic universe. For over a millennium he has been maligned in various European sources as an apostate, a pretender, and even the Antichrist, and one has had to wait well over a thousand years until the twentieth century to see fair treatments of him appear in European languages. Until recently, Christians usually compared him, of course very unfavorably, to Christ, assuming that he holds the same position in Islam as Christ does in Christianity.

Westerners therefore called Islam Mohammadanism until a few decades ago, a term not accepted by Muslims, and concentrated their attacks against him in order to vilify Islam. Even those who admitted to his remarkable achievements in this world refused to accept him as a prophet.

Christian attacks against him were, in fact, the most painful and divisive element in Islam’s relationship with Christianity.

Muhammad, the son of Abdullah, was a descendant of Prophet Abraham though his son, Ishmael, and was from the prominent Arab tribe of Quraysh. He was not the founder of Islam but its final prophet and the last messenger sent by God to the world as a mercy to mankind. Every detail of his private life and public speech has been documented and carefully preserved up to the present day.

During the 23-year period of his prophethood, he changed the entire Arabian Peninsula from paganism to worship of One God, from tribal warfare to national unity, from anarchy to disciplined living, from barbarism to the highest standard of moral excellence. At the time of his death most inhabitants of Arabia and the southern regions of Iraq and Palestine had voluntarily embraced Islam. To posterity he left a creed of pure monotheism that included comprehensive legislation based on a balanced system of moral values.

No other man in history excelled in so many different aspects of life. He not only taught and established the religion but founded a state, initiated numerous political and social reforms, built a powerful and dynamic society, and completely revolutionized the realm of human thought and behavior - all within just over two decades. His coming was foretold in previous scriptures, and he was described therein. The honest and open-minded among the Jews and Christians recognized him from those descriptions and believed in his message. But the message he communicated was not meant for a particular people, place or period; it was a global message. Muhammad was appointed to invite humanity to the same objective as did the prophets before him: the worship of God alone without associates or intermediaries. 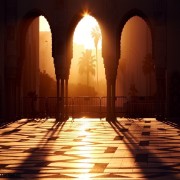 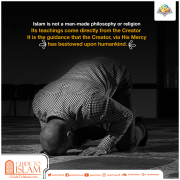 Islam is not a man-made philosophy or religion