The highest building in the world; the most expensive watch in history; a private jet with golden seats; a yacht with 100 cabins; a personal library holding thousands of volumes; a bank account with a balance of one million dollars, ten millions, one hundred millions…

And a grave with only one body and two angels questioning its resident.

When death approaches, the dying person fears for the loved ones he is leaving behind lest they should suffer poverty. When death approached the one who loved the Muslim community best, he feared for us that we should have too much. He said: ‘By God, I do not fear poverty for you. What I fear for you is that worldly luxury should be available to you as it was for communities before you, and then you will compete in acquiring it as they competed, and it will be your ruin, as it was their ruin’.

Let us stop for a moment and look at everyone around us, including ourselves. Everyone wants more of what they love most. One person wants more money, while another wants more children and a third would love to have more servants or subordinates. One woman wants to be invited to every dinner party, while another wants to have more jewellery, or a bigger and fuller wardrobe, or more electronic gadgets. Indeed we are today aiming for greater numbers of people using Twitter or Facebook. Worse than all are those who boast about the number of sins or offences they commit.

It is as God tells mankind in the Qur’an:

‘You are preoccupied by greed for more and more, until you go down to your graves. Nay, in time you will come to know! Again, in time you will come to know! Indeed, were you to know [the truth] with certainty... You would, most certainly, see the fire of hell. Again, you will, most certainly, see it with your very eyes. Then on that day you will certainly be questioned about your joys and comforts’.

This craving for more and more leads us to hurt the feelings of the poor by our arrogance. As the hungry see our extravagance, they feel as if we are trampling upon them. Yet this insatiable thirst for more knows no limit. Prophet Muhammad (peace be upon him) said: ‘If a human being owns a valley full of gold, he would love to have another. Nothing fills his craving except dust, but God accepts the repentance of the one who repents’

Indeed the crave for more is like a cancer that never stops. The whole world will not satisfy the greed of one person. Such ugliness and such madness will never cease. Yet God warns us against being preoccupied with the luxuries of this present life, as He says:

‘Believers! Do not let your riches or your children make you oblivious of the remembrance of God. Those who do so will surely be the losers’.

It is right that anyone who listens to this Qur’anic verse should shudder in fear of being one of the losers. Then listen to the next verse:

‘Give, then, out of what We have provided for you, before death comes to any of you, and then he says, ‘My Lord, if You would grant me a delay for a short while, I would give in charity and be one of the righteous.’

We all need to turn to God saying a sincere prayer to cure us of the greed for more. We need to take the antidote to it, which is to give to others of we have and love. This is certainly a cure that has been well tried.

When Life Begins - The Plane of Judgement 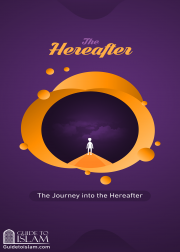 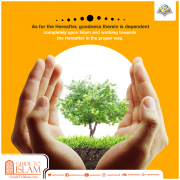